Beyond Meat, Tyson’s Raised & Rooted and other plant-based foods are officially mainstream

With more consumers willing to try plant-based proteins and more access, a meatless meal is no longer radical 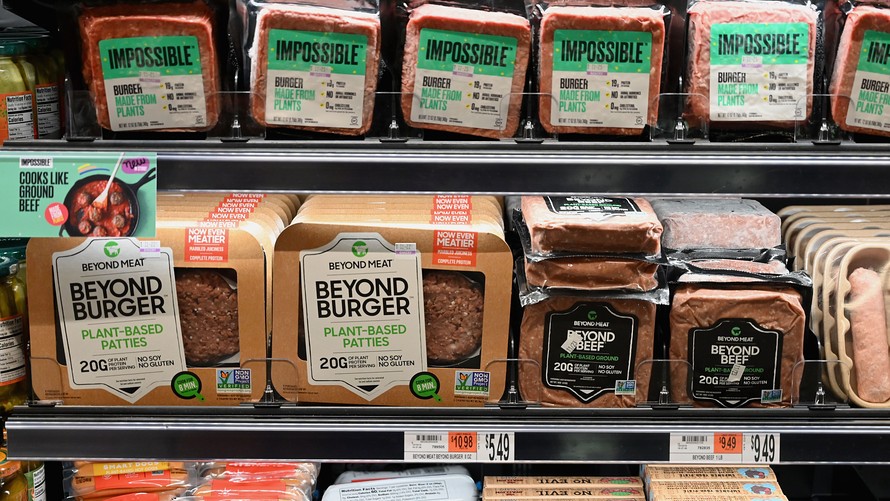 AFP/Getty Images
Consumers are more willing to try plant-based meats, and grocers, food companies and fast-food chains are jumping at the chance to provide access

A meatless meal was once a radical proposition for many consumers.

Now that health and wellness concerns are top of mind and plant-based meats offer up new and delicious flavors, a diet where vegetables and protein alternatives show up prominently is much more commonplace.

”Plant-based alternatives have absolutely gone mainstream and are gaining much more acceptance among consumers,” said Lizzy Freier, managing editor at Technomic, a data and analytics provider for the food-service industry.

“As people become more familiar with it, it’s now being integrated as something that’s just as tasty as traditional meat and something that’s sustainable. So I think the focus of late has been more on taste and sustainability and less on health.”

Read: Impossible Foods adds pork and sausage in battle with Beyond Meat

The global meat market is about $1.4 trillion.

At first, plant-based alternatives were viewed mostly through the wellness lens.

“That health piece has become cost of entry and now consumers are talking about taste,” said Risa Schwartz, global lead for consumer insights and analytics at Tyson Foods inc. (NYS:TSN)

There’s a “reframing” of protein going on, Schwartz said, such that consumers are looking for it in different places and at different times of day. That includes snacks and breakfast.

In addition, plant-based alternatives are showing up on children’s plates as millennials pass on their desire for a more diverse menu.

“Parents are more willing to have kids try new things, but it’s about the form it takes,” Schwartz said.

Tyson’s plant-based protein brand Raised & Rooted offers nuggets for these young consumers, Schwartz says, as an example. It’s a familiar food made in a new way.

Raised & Rooted was available in 7,000 stores as of November 2019. Kroger Co. (NYS:KR)   also announced that it is launching its own private-label brand, Emerge: Plant Based Fresh Meats, adding the availability of these items.

Taste is a significant factor for Beyond Meat Inc. (NAS:BYND)  , even as the company emphasizes it as an eco-friendly alternative.

“We are proud of our products today, but are committed to a rigorous cycle of rapid and relentless innovation that includes a continual search for simple, non-GMO inputs from plants that will enable us to offer better products in both taste and nutrition,” said Ethan Brown, Beyond Meat’s chief executive, on the most recent earnings call, according to a FactSet transcript.

Taste has been the most important upgrade in recent years, says Mark Kalinowski, chief executive of Kalinowski Equity Research.

“The technology has improved so that you have people bite into a plant-based beef burger and can’t tell the difference from an actual beef burger,” he said.

More than half of U.S. consumers say meat alternatives should mimic the taste of real meat, according to Mintel. And more than one in five consider themselves flexitarians, meat eaters who mix in some vegan and vegetarian meals.

Fast-food restaurants, many of which serve mainstream dining options like burgers and chicken sandwiches, have jumped into the plant-based meat trend enthusiastically. Items like Burger King’s Impossible Whopper, Dunkin’ Brands’ (NAS:DNKN)   Beyond Sausage Sandwich and Carl’s Jr.’s Beyond BBQ cheeseburger are just some of the dishes that have flooded menus across the U.S. in recent months.

Kalinowski takes a wait-and-see approach to the future of plant-based alternatives in terms of how big it will get and how much time it will take to get there. But he does think the future is a bright one for plant-based proteins now that they’ve already become more widely accepted.

Nearly a third of consumers (32%) would like more restaurants to offer protein substitutes for meat, poultry and seafood, according to data compiled for one of Technomic’s 2019 Center of the Plate reports.

And more than a third of millennials (36%) would likely try a plant-based beef alternative if it were available.