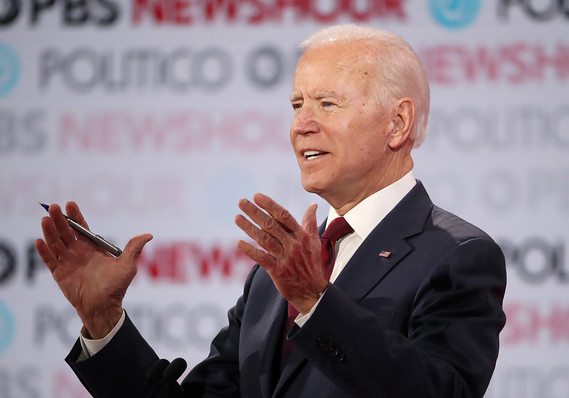 Joe Biden on Tuesday called the death of George Floyd in police custody a “wake-up call” for the country, as he blasted President Donald Trump over a vow to deploy the military to quell violent protests in U.S. cities.

In an address at Philadelphia’s City Hall, presumptive Democratic presidential nominee Biden invoked Floyd, a black man, who died after he was pinned at the neck for several minutes by a white Minneapolis police officer.

“‘I can’t breathe,’” Biden said, quoting Floyd’s last words. “But [the words] didn’t die with him. They’re still being heard. They’re echoing across this nation.”

Biden’s address came a day after Trump threatened to mobilize the U.S. military to keep the peace across the country, following days of violent protests and minutes after federal police charged a crowd of peaceful demonstrators to clear a path for a presidential photo-op.

Biden — who is poised as early as Tuesday to clinch the Democratic nomination — said Trump is “more interested in serving the passions of his base than the needs of the people in his care.”

The Democratic contender said addressing racism couldn’t wait until after the election, and called on Congress to take policing-reform action immediately, including banning choke holds and stopping the transfer of what he called “weapons of war” to police departments. Biden also vowed if elected to set up a national police oversight commission and called for police departments to review hiring and training.

Trump in a Rose Garden address on Monday night declared himself “your president of law and order” and demanded that local officials “dominate the streets.”

Biden in his speech on Tuesday, meanwhile, pledged not to “traffic in fear and division” or “fan the flames of hate” and pledged to heal wounds caused by racial division.

U.S. stocks /zigman2/quotes/210599714/realtime SPX +1.49%    mostly rose Tuesday as investors trained their attention on the prospect of fuller business activity in the wake of the coronavirus pandemic, and away from a fresh round of civil unrest in major U.S. cities.