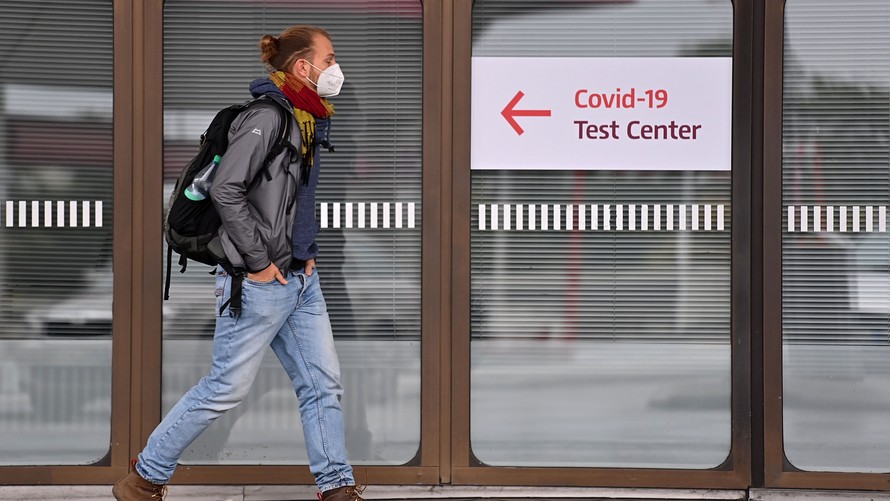 The global tally of confirmed cases of the coronavirus-borne illness COVID-19 headed closer to 100 million on Monday with the U.S. accounting for a quarter of that total, as President Joe Biden prepared to reinstate travel restrictions against foreign citizens visiting the U.S. from Brazil, the U.K, Ireland and much of the rest of Europe, as well as South Africa.

The travel restrictions that were first imposed last spring will be upheld amid fears about new strains of the virus that were first detected in the U.K. and South Africa, that are understood to be more infectious and to carry higher viral loads than the original virus.

The South African variant, which has not yet been detected in the U.S., is particularly worrying as it may be less responsive to the current vaccines that have won emergency use authorization in the U.S., one developed by Pfizer Inc. (NYS:PFE)  and German partner BioNTech SE (NAS:BNTX) , and another developed by Moderna Inc. (NAS:MRNA)

Moderna said Monday that laboratory studies demonstrated that its vaccine can still protect people against the new variants. The study was not conducted in humans, however. The findings were released in a news release, and the company said it expects the results to be published in preprint form.

Moderna now plans to study booster doses for its two-dose COVID-19 vaccine, to see if a third dose of some kind can increase neutralizing antibody titers and if a booster can specifically protect against the B.1.351 variant. This booster, mRNA-1273.351, will be tested in preclinical studies and a Phase 1 study in the U.S.

The number of COVID-19 patients in U.S. hospitals fell to 110,628 on Sunday, according to the COVID Tracking Project, down from 113,609 the day earlier and the lowest level since Dec. 14.

“While cases, hospitalizations, and deaths remain at unacceptable levels, there is no denying cases and hospitalizations are improving in notable ways,” said Chris Meekins, analyst at Raymond James in weekly commentary.

The Centers for Disease Control and Prevention’s vaccine tracker is showing that as of 6.00 a.m. ET Sunday, 21.8 million doses had been administered and 41.4 million doses delivered. In the last week, the U.S. has got close to dosing 1 million people a day, which would help Biden get to his goal of 100 million doses in the first 100 days of his presidency.

“There are still potential threats that could throw us off course, like the virus mutating or vaccine production capacity; however, these improvements are encouraging and signal the U.S. is heading in a better direction,” Meekins wrote.

In his first few days as president, Biden has published a 198-page pandemic response plan and signed 13 executive actions to mitigate the virus” “His actions are consistent with his campaign emphasis on combating the pandemic and include some of his key proposals, such as rejoining the WHO, urging Americans to wear masks for 100 days, and fortifying travel safety protocols,” said Meekins.

There was good news from Dr. Anthony Fauci, head of the National Institute of Allergy and Infectious Diseases, who said on Friday that the first single-dose COVID-19 vaccine could get emergency approval in as little two weeks. Fauci told Rachel Maddow’s MSNBC show that the vaccine that is being developed by Johnson & Johnson may receive an EUA by then.

“I would be surprised if it was any more than two weeks from now that the data will be analyzed and decisions would be made,’ he said. The J&J vaccine has a second advantage in that it does not require ultralow temperature storage, as the others do.

• Merck (NYS:MRK)  is discontinuing development of its two COVID-19 vaccine candidates following disappointing trial results, and will instead focus on the development of two investigational therapeutic candidates. The decision comes after a review of findings from Phase 1 studies of the vaccine candidates, named V590 and V591, in which immune responses were inferior to those seen following natural infection and in trials of other vaccine candidates. “Merck continues to advance clinical programs and to scale-up manufacturing for two investigational medicines, MK-7110 and MK-4482 (molnupiravir); molnupiravir is being developed in collaboration with Ridgeback Bio,” the company said in a statement.

• The CDC updated recommendations for vaccine administration to say that it’s okay to space out the first and second doses of the currently available COVID-19 vaccines by up to 42 days, if necessary, MarketWatch’s Jaimy Lee reported. The regulatory labels say that doses of the BioNTech and Pfizer vaccine should be spaced 21 days apart, while the second dose of Moderna’s vaccine is expected to be administered 28 days after the first dose. “However, if it is not feasible to adhere to the recommended interval, the second dose of Pfizer-BioNTech and Moderna COVID-19 vaccines may be scheduled for administration up to 6 weeks (42 days) after the first dose,” the CDC said. The United Kingdom has also said it’s acceptable to space out doses of its authorized vaccines, which include the AstraZeneca (NAS:AZN)   (LON:UK:AZN)  and University of Oxford vaccine in addition to the ones developed by BioNTech/Pfizer and Moderna, as needed.

• Mexican President Andrés Manuel López Obrador tested positive for COVID-19, but said that his symptoms are mild and that he’s receiving medical treatment, the Wall Street Journal reported. López Obrador, 67, has continued traveling around the country and attending public events even after a second wave of coronavirus infections hit the country over the past month. Mexico has suffered close to 150,000 confirmed COVID-19 deaths. “As always, I’m optimistic,” he said in a tweet. “We’ll all get through this.”

• France has issued a decree banning certain homemade face masks from being worn in public amid growing concerns that they do not offer sufficient protections against new variants, the Guardian reported. Only three types of masks will be recommended: surgical, FFP2 and fabric masks made to Category 1 standards. French officials confirmed that it will be tricky to police the ban. “I don’t imagine the police are going to be asking people the protection level of their mask,” a spokesperson for the prime minister said. Germany last week ordered residents of Bavaria to wear higher grade N95 medical masks in public.

• A new study underscores the high stakes renters face as they want for government assistance amid the coronavirus pandemic, MarketWatch’s Jacob Passy reported. Over the next four years, the COVID-19-related recession is expected to cause chronic homelessness to increase some 49% nationwide, according to new research from the Economic Roundtable, a non-profit urban research organization based in California. The homelessness crisis is expected to peak in 2023, researchers found, with an additional 603,000 working-age adults without a place of their own to sleep. “Disconnection from work is a degenerative dynamic — less work, less earnings, less stable living conditions, and further disconnection from work,” the researchers wrote. “It is not total job loss, but rather loss at the margins of the labor market that is the primary cause of economically-driven homelessness.” 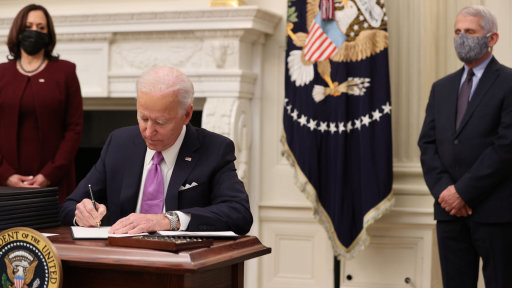 President Biden on Thursday announced a series of actions his administration plans to take to combat the coronavirus, including accelerating vaccine administration and expanding the mask mandate. Photo: Jonathan Ernst/Reuters

The number of confirmed cases of COVID-19 worldwide climbed above 99.3 million on Monday, according to data aggregated by Johns Hopkins University, and the death toll rose to 2.13 million. About 53 million people have recovered from COVID-19.

China, where the virus was first discovered late last year, has had 99,323 confirmed cases and 4,805 deaths, according to its official numbers.