Bitcoin internet searches have a stunning correlation with bitcoin prices

There is an 80.8% correlation ratio between bitcoin prices and internet searches for the asset, says researcher 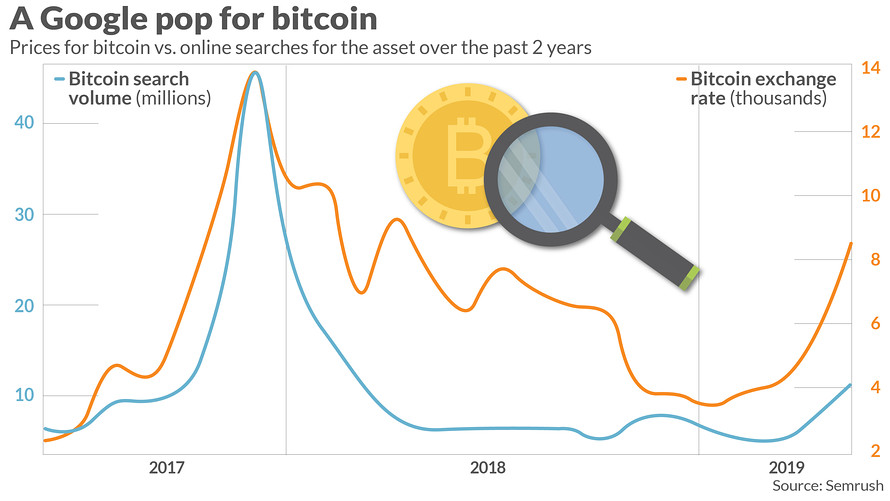 It’s a crypto chicken-and-egg story for bitcoin. Internet searches for bitcoin are on the rise, and that has come as bitcoin prices have seen wild price swings.

It’s hard to say whether searches lead to higher prices or vice versa, but the correlation thus far has been eerie.

Bitcoin searches on Google, for example, between June 19 and June 26 have risen by more than 158% (see chart above), according to media analytics company SemRush.

“We also identified that there’s an 80.8% correlation ratio between Google searches and bitcoin price,” from June 19 to June 26, wrote Olga Andrienko, head of global marketing at SEMrush. A 100% positive correlation means that two variables are moving in perfect tandem.

Bitcoin prices (COINDESK:BTCUSD) this week had been staging a parabolic rise toward $14,000, which would have represented a roughly 40% weekly return on the No. 1 cryptocurrency in the world, until gains began to disintegrate late Wednesday.

Most recently, bitcoin prices were down an unsettling 22% on Thursday, or $3,150, to $10,700, according to FactSet data, based on bitcoin futures prices trading on CME Group.

To be sure, despite the plunge, bitcoin prices are still up about 7.5% on the week and 194% in the year to date.

Still, the drop for those unfamiliar with bitcoin’s volatility must be jarring even if the digital currency has been mostly rising. Thursday’s decline represents the third-sharpest daily fall for the asset on record, according to Dow Jones Market Data

Volumes for bitcoin, however, are worth noting. A 90-day rolling average of trading in the digital currency shows that gains are far from the frothy activity of 2017 or early 2018 (see chart below). Bitcoin reached a peak in December 2017 at around $20,000 and tumbled to a nadir at $3,194.96, a year later. 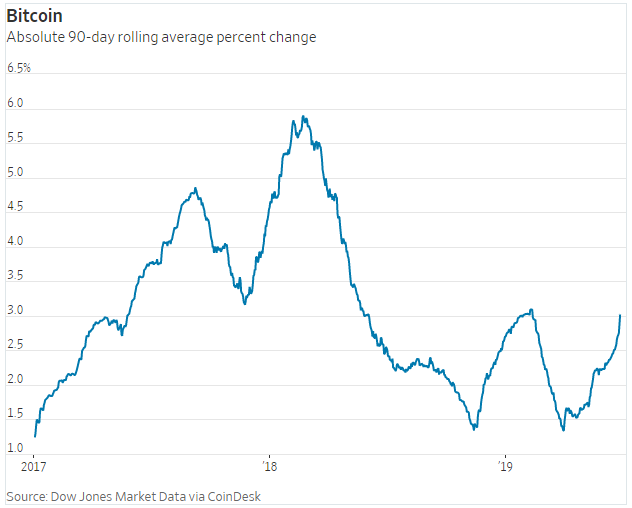 Since that low, bitcoin has rallied about 234%, including its recent skid. Those gains for bitcoin, originally created back in 2009, have come as traditional companies, which had mostly eschewed digital assets as a wonky fad backed by libertarian-leaning fanatics, have begun to show greater interest in the digital-ledger technology blockchain, which underpins most cryptocurrencies.

Bicoin internet searches and prices also were uncannily correlated back in 2017 when the asset was soaring by some 1,500%.

On Thursday, MarketWatch’s Mark Hulbert said the surge in bitcoin’s prices make it susceptible to a crash, citing a study, “Bubbles for Fama.”

—Ken Jimenez has contributed to this article