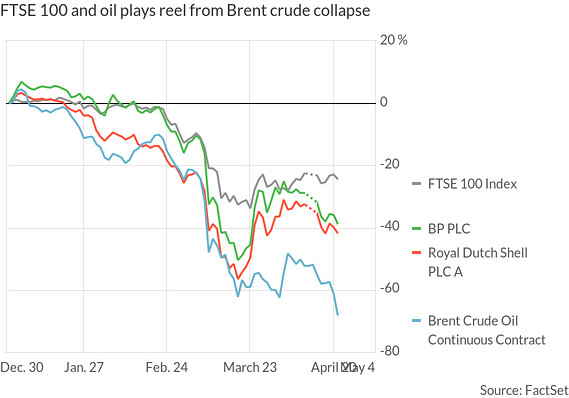 BP /zigman2/quotes/202286639/delayed UK:BP +3.51%  and Royal Dutch Shell /zigman2/quotes/206428183/delayed UK:RDSA +3.35%  each skidded 6% as financial markets reacted to the stunning development of the May light sweet crude contract turning negative on Monday. While technical factors relating to retail interest and the lack of storage were behind the subzero prices, the broader issues of deteriorating world demand and a glut of supply are hitting the whole oil complex.

“Today, traders are saying that they are not waiting till the next expiry to make oil prices crumble again. Except for the U.S. putting 75 million barrels of crude into its strategic reserve, there is nothing to make energy traders believe that storage constraints, rising inventories, and demand concerns will be alleviated,” said Edward Moya, senior market analyst at OANDA.

BHP Group /zigman2/quotes/203323256/delayed UK:BHP +0.64% dropped 6%. The mining giant said its capital and exploration expenditure will be below its previously planned $8 billion, and the production guidance for its partly-held Antamina copper mine is under review, as is energy coal production guidance.

Hazard detection products maker Halma /zigman2/quotes/204238281/delayed UK:HLMA -1.09%  rose 2% as the company said its adjusted profit before tax for the year ending March 31 will be in a range of £265 million to £270 million, in line with the guidance it gave last month. Halma said results in the current financial year will have a “significant second half weighting even though the timing and profile of recovery remains uncertain at this stage.”