BlackRock warns of more ‘poor’ action for U.K. stocks with a year to go to Brexit 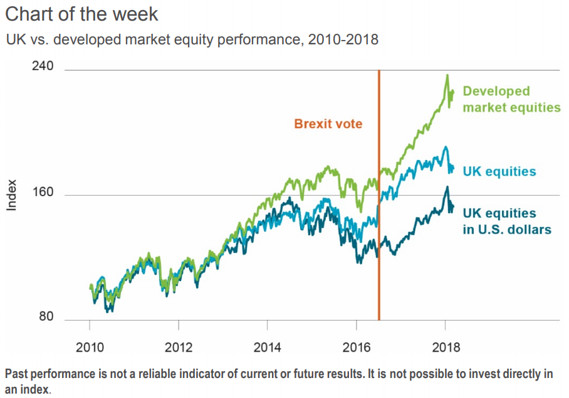 British stocks are likely to keep underperforming after stumbling so far this year, according to BlackRock Inc.’s global chief investment strategist, Richard Turnill.

The country’s equity market has endured “a poor start to 2018” and “underperformed global markets for much of this decade,” and investors shouldn’t count on an improvement, Turnill wrote in a note dated Monday that features the chart above.

“The new transition deal between the U.K. and European Union removes some uncertainty around Brexit, but provides no relief for U.K. stocks,” he said.

The EU and U.K. agreed last week on broad terms for a two-year transition deal that’s expected to take effect on March 29, 2019, when Britons are due to leave to the trade bloc.

The agreement “reduces the risk of a disorderly U.K. exit from the EU next year,” and Brexit-related uncertainties have been part of the reason for the relatively weak equity performance, Turnill said. But it’s not necessarily now time to break out the champagne — or English sparkling wine , if you prefer.

“The recent deal appears unlikely to be a catalyst for a recovery in the U.K. stock market,” Turnill said. “The end state of U.K.-EU relations is highly uncertain, with potential for a new cliff-edge risk at the end of 2020.”

Many other strategists have warned that equity investors should steer clear of Britain since the Brexit vote in June 2016, with an Allianz team saying the country is “set to endure a significant period of economic uncertainty and weakness.” On the other hand, value-minded stockpickers have said there are bargains in several U.K. sectors.

Fourth-quarter figures published Thursday by the U.K.’s Office for National Statistics confirmed the British economy is showing the weakest expansion among the Group of Seven advanced economies. The numbers arrived on the day that the U.K. enters the final year of its EU membership.

The British currency has jumped 13% over the past 12 months to about $1.41, but remains below the $1.50 mark that it was trading around before the referendum on EU membership. Sterling’s gyrations can have a big effect of the many multinational British companies that generate most of their sales in other currencies.

Brexit isn’t the only challenge for the British equity market, according to Turnill, a Cambridge alumnus who once worked as an economic adviser for the Bank of England.

“U.K. large-cap indexes have a relatively high weighting to sectors that have underperformed in the past year, such as consumer staples and energy,” he said.

Turnill echoes other analysts who have noted the British market’s makeup presents a big problem. That includes a heavier weighting to dividend payers and defensive plays as well as overall sensitivity to the pound and what’s expected to be the removal of ultra-easy monetary policy.