Brace yourself: This is how much America’s 1% has saved 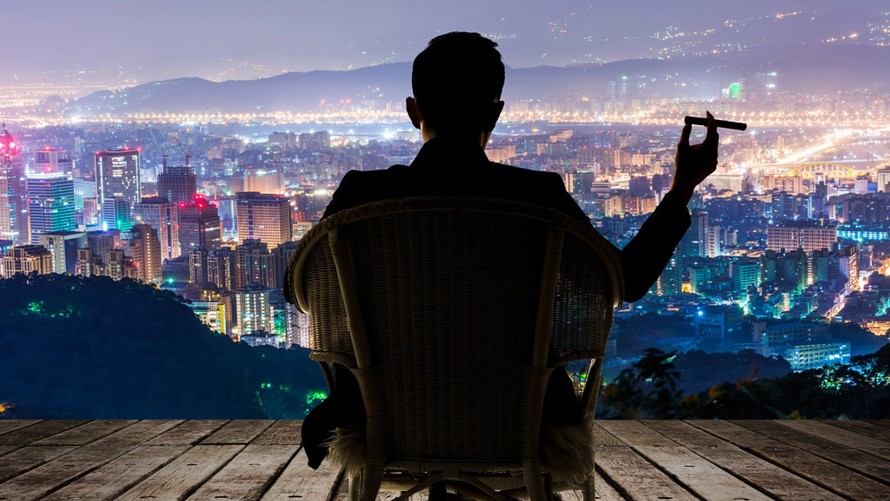 Getty Images/iStockphoto
The top 1% of households as measured by income have median savings of $1.1 million, a new report finds. The bottom 20% of Americans have no money saved for a rainy day, by the same measure.

Some of these people are not like the others.

The median American household currently holds just $11,700 in savings, according to a new analysis of Federal Reserve and Federal Deposit Insurance Corp. data by personal-finance site Magnify Money . Median balances (the midpoint value) are lower than the average savings rates. The top 1% of households in the U.S. by income have a median savings of $1.1 million across a variety of saving accounts. The bottom 20% by income have no savings accounts and the second lowest 20% income earners have just $26,450 saved. 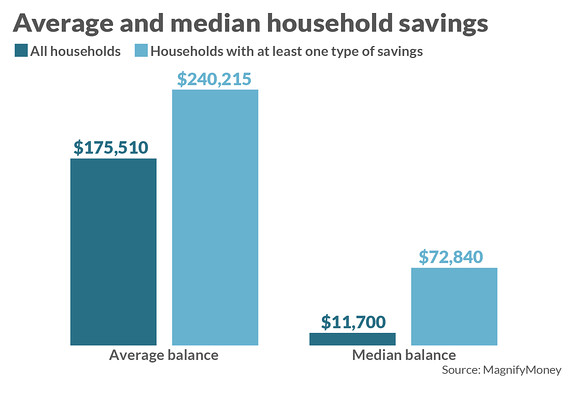 Don’t miss: Only half of Americans actually own stocks

So what households save the most? “Wealthier households comprise most of them, but less-well heeled households can have healthy levels of savings as well,” the report concluded. Of those households that have managed to save more than the national savings average, 59% are among the top 20% of income earners. But many less well-off families have also manage to save money in these kinds of accounts: Approximately 41% of above average savers are in the bottom 80% of income, the report said.

“Low-income people can and do to save, particularly when provided with incentives,” Ratcliffe said. Peer pressure helps: People who realize they’re spending more than their families, friends and colleagues—those who are of similar ages, incomes, locations and credit scores—will actually cut back on their spending, research shows. The most common advice is to start saving early and often to benefit from compound interest, which adds interest to both the capital and the interest already earned. (Here are 101 simple ways to save more .)

Very few of the 126 million U.S. households covered in the latest data are average. “As of 2016, about 78% of households had at least one of the following: a savings account, a retirement savings account, a money market deposit account or certificates of deposit,” it said. The bad news: Just over half of Americans own stocks, a Gallup report recently concluded . That includes 401(k) plans, shares in an equity mutual fund and/or an IRA account. Two-thirds of Americans do not even participate in or have access to a 401(k) plan, according to the U.S. Census Bureau. 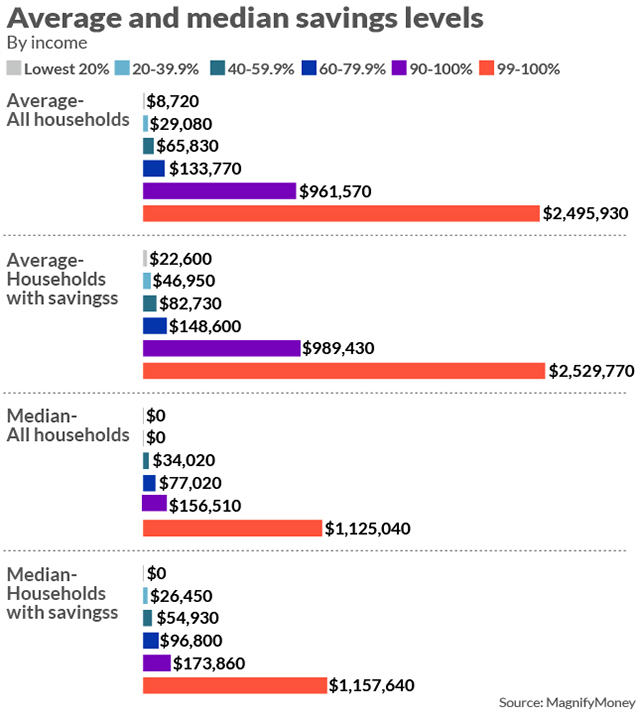 Also see: Americans are hoarding money in their checking accounts—and that could be a problem

The poorest Americans fare the worst. Some 50.8 million households or 43% of households can’t afford a basic monthly budget for housing, food, transportation, child care, health care and a monthly smartphone bill, according to an analysis of U.S. government data released earlier this year by the United Way Alice Project, a nonprofit based in Cedar Knolls, N.J. “For too long, the magnitude of financial instability in this country has been understated,” said John Franklin, chief executive of the United Way Alice Project.

The United Way Alice Project uses standardized measurements to calculate the “bare bones” household budget in each county in each state. It maintains that the federal poverty level — currently $25,100 for a family of four — doesn’t accurately illustrate the number of people living in poverty because it doesn’t take into account the dramatically different costs of living across the U.S. “It is morally unacceptable and economically unsustainable for our country to have so many hard-working families living paycheck to paycheck,” he said. 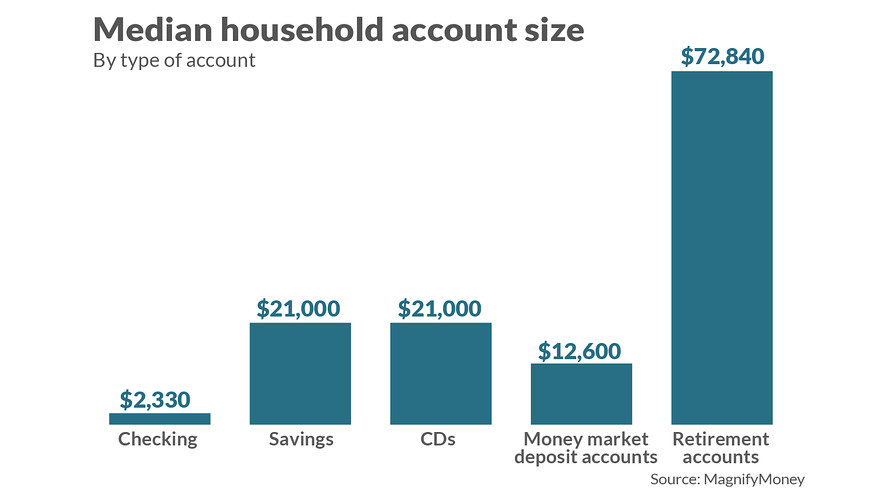 Recommended: There’s been a spike in the number of millennials with $100,000 saved

The project says Alice (“asset limited, income constrained, employed”) workers are the forgotten people: Child care workers, home health aides and retail workers in low-paying jobs and have difficulty saving money and are one paycheck away from the street. In 2017, 44% of people in the U.S. said they could not cover an unexpected $400 emergency expense or would rely on borrowing or selling something to do so, down from 46% the year before, according to a separate report released last year by the U.S. Federal Reserve.

When times are good, Americans feel confident by keeping little in checking, but when times are difficult they store money in checking accounts, pulling back on spending on retail and restaurants. Michael Moebs, economist and Chief Executive of Moebs Services, said this may be a cause for concern at a time when the Federal Reserve is raising interest rates, making it more difficult to buy a home, but creating more of an incentive to put money into savings accounts. The one obvious upside: Many investors have enjoyed gains in a 113-month bull market, the longest in history.