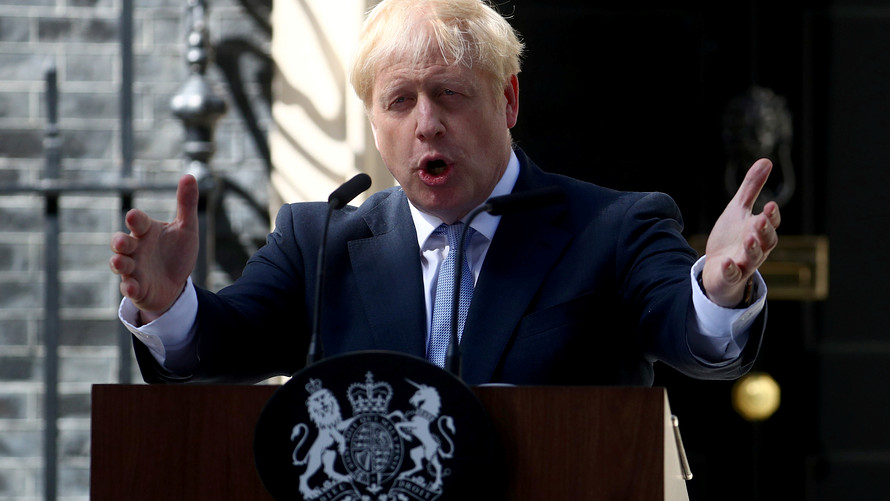 The pound bounced on Boris Johnson’s first day in the job, as the new prime minister expressed optimism over striking a Brexit deal in the next 99 days.

After being asked by the queen to form a government, Johnson delivered his first speech as prime minister on Wednesday and promised Britain would leave the European Union on Oct. 31 — “no ifs and no buts.”

Sterling /zigman2/quotes/210561263/realtime/sampled GBPUSD +0.1721% improved on earlier gains to climb 0.5% to $1.249 as Johnson expressed confidence in a “new and better” deal, relegating a no-deal Brexit to just a “remote possibility.”

Markets had priced in a Johnson victory, and his appointment has brought much-needed stability to sterling, which had fallen in recent days over mounting fears of a no-deal scenario.

However, with Johnson set to announce his cabinet later on Wednesday, the pound could yet weaken if hard-line Brexit backers are given key jobs.

The former mayor of London’s tenure has already had an impact on markets, but, with so much on his plate, here’s what to expect over the next 100 days.

Stocks that could rise in the longer run? A declining pound has boosted the internationally exposed FTSE 100 /zigman2/quotes/210598409/delayed UK:UKX -0.64% in recent weeks, a trend that could continue if Johnson ramps up the no-deal rhetoric.

Investors, however, would have marginally preferred to see Jeremy Hunt take up residence in No. 10, according to research by broker the Share Centre. Speaking to MarketWatch, Share Centre’s chief executive, Richard Stone, said that while the pound and domestic stocks would come under pressure in the short term, a Johnson reign could end up being brighter in the long run.

He said: “Both candidates have indicated they will look to loosen fiscal policy slightly and increase public spending, based on the various commitments they have made.

“This should, in the longer run, be good for corporates and their earnings and thus for share prices — assuming the near-term crisis of Brexit is navigated sufficiently well to enable them to implement those longer-term economic plans.”

Johnson’s stance on rising tensions with Iran in the Middle East could also have an impact, with potential action boosting crude prices and favoring the FTSE 100’s oil majors.

Trade: Will Trump see eye-to-eye with new prime minister? Johnson, born in the U.S. to British parents, was reluctant to criticize U.S. President Donald Trump throughout the leadership contest.

The new prime minister has made negotiating a trade deal with the U.S. a priority and could even travel across the pond in one of his first major acts in charge.

U.K. Trade Secretary Liam Fox claimed striking such a deal before leaving the EU on Oct. 31 would be in breach of European law, but that is unlikely to dampen Johnson’s enthusiasm to get a deal done.

The pound: What happens next? The pound /zigman2/quotes/210561263/realtime/sampled GBPUSD +0.1721% has endured a bad run of late as the Conservative leadership candidates have ramped up the Brexit rhetoric and heightened the prospect of a no-deal scenario.