Credits staff at St. Thomas’ Hospital in London with having saved his life 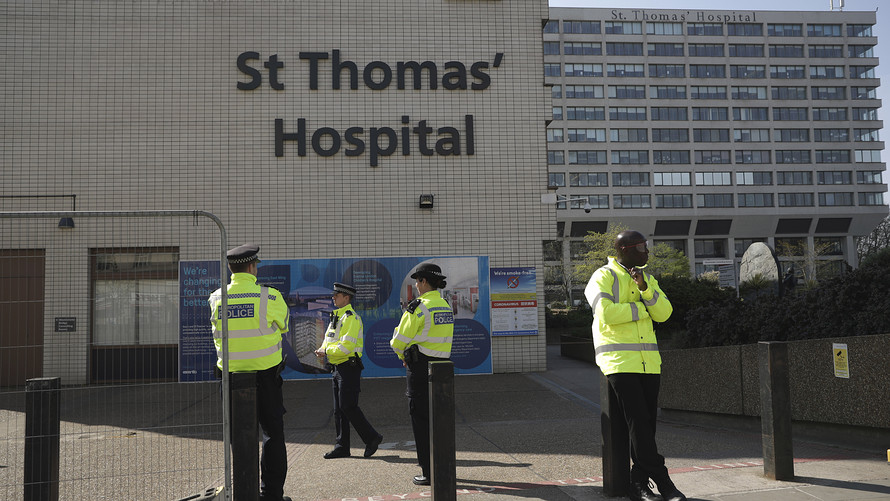 LONDON (AP) — British Prime Minister Boris Johnson was discharged from a London hospital where he was treated in intensive care for the coronavirus as the U.K. on Sunday became the fourth European country to surpass 10,000 virus-related deaths.

Johnson’s office said he left St. Thomas’ Hospital and will continue his recovery at Chequers, the prime minister’s country house.

“On the advice of his medical team, the PM will not be immediately returning to work,” the statement said. “He wishes to thank everybody at St. Thomas’ for the brilliant care he has received.”

Johnson had been in the hospital for a week and had spent three nights in the intensive care unit. Earlier in the day, he said he owes his life to the National Health Service medical workers who treated him.

“I can’t thank them enough,” Johnson said in his first public statement since he was moved out of intensive care Thursday night. “I owe them my life.”

Johnson, 55, was the first world leader confirmed to have the illness. His coronavirus symptoms at first were said to have been mild, including a cough and a fever, and he was working from home during the first few days.

But he was admitted to St. Thomas’ on April 5 after his condition worsened and he was transferred the following day to its intensive care unit, where he received oxygen but was not put onto a ventilator. He spent three nights there before moving back to a regular hospital ward.

Johnson’s pregnant partner, Carrie Symonds, said in a series of tweets that she “cannot thank our magnificent NHS enough” and that she “will never, ever be able to repay you and I will never stop thanking you.” She admitted there “were times last week that were very dark indeed. My heart goes out to all those in similar situations, worried sick about their loved ones.”

While Johnson convalesces, Foreign Secretary Dominic Raab is handling the nation’s response to the pandemic that has infected at least 1.79 million worldwide and killed 110,000 people. Experts say those numbers seriously understate the impact of the pandemic, due to limited testing and different ways of counting the dead.

Britain has been in effective lockdown since March 23 and the government will extend the restrictions later this week.

But Johnson’s Conservative government has come under fire for its slow response to confronting the pandemic — allowing tens of thousands to gather at the Cheltenham horse racing festival in mid-March, for example. It’s also faced criticism for its slow rollout of a coronavirus testing program.

Over the past few days, the British government has faced acute criticism for the lack of personal protective equipment for frontline workers in hospitals, amid reports that some nurses have had to resort to cutting up garbage bags to cover themselves. Health Secretary Matt Hancock revealed Saturday that 19 frontline workers have died from the virus.

The Royal College of Nursing has piled more pressure on the government, urging members to refuse to treat patients as a “last resort” if adequate protections are not provided.

Business Secretary Alok Sharma stopped short Sunday of apologizing for the lack of medical masks and gowns but said it is “absolutely right that no medical professional should be placed in a position where they have to make that choice.”

“That is why we are making sure we get the equipment to the frontline,” he told Sky News.