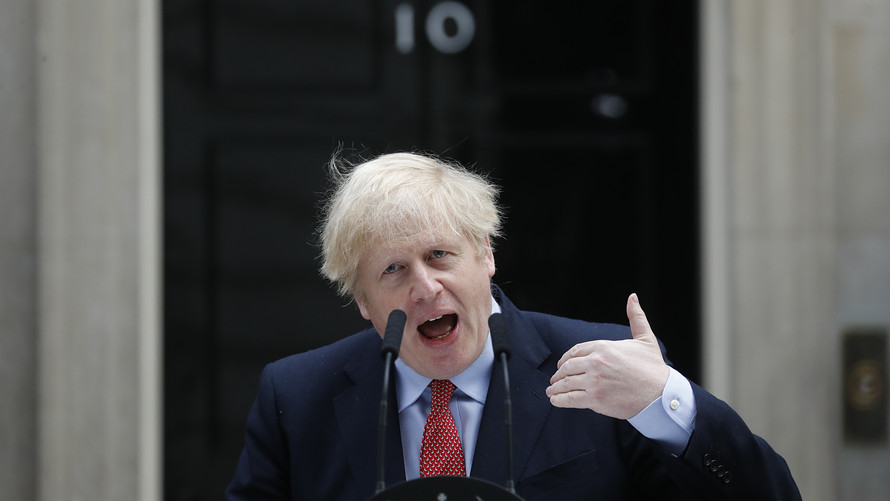 Associated Press
British Prime Minister Boris Johnson makes a statement on his first day back at work in Downing Street, London, after recovering from a bout with the coronavirus that put him in intensive care, April 27, 2020.

U.K. stocks on Monday participated in a global rally, gaining ground in anticipation of further central bank action as Prime Minister Boris Johnson returned to work after being sidelined by the coronavirus.

The Bank of Japan kicked off a week for central bank action by lifting the cap on Japanese government bond purchases and boosting its purchases of commercial paper and bank loans. The U.S. Federal Reserve and European Central Bank also are expected to take more action.

Johnson, returning to work after being hospitalized for coronavirus, said announcements on opening up would come but said it is also a time of “maximum risk.”

Reopening of New York state could begin in mid-May, according to Gov. Andrew Cuomo. Italy’s Prime Minister Giuseppe Conte said its lockdown will be eased from May 4, while France is due to present an exit strategy on Tuesday.

“There is a feeling in the markets that things are starting to go back to normal, albeit at a very slow pace,” said David Madden, market analyst at CMC Markets U.K.

Ashtead Group (LON:UK:AHT)  surged 7% as the equipment rental company said under all scenarios it has modeled, it will remain free cash flow positive throughout the next financial year. April U.S. rental-only revenue will be about 15% lower, it said, forecasting an adjusted pretax profit for the April 30-ending fiscal year of £1.05 billion.

InterContinental Hotels (LON:UK:IHG)  rose as the hotels operator said it has enhanced its liquidity position to $2 billion from $1.35 billion. The company said the occupancy level at the hotels that are open is in the low to mid 20% range.