Brits face longer wait for pubs to reopen, but many are enjoying takeaway pints on the street

People in the U.K. have been enjoying takeaway pints outside pubs across London but the official reopening won’t happen until early July 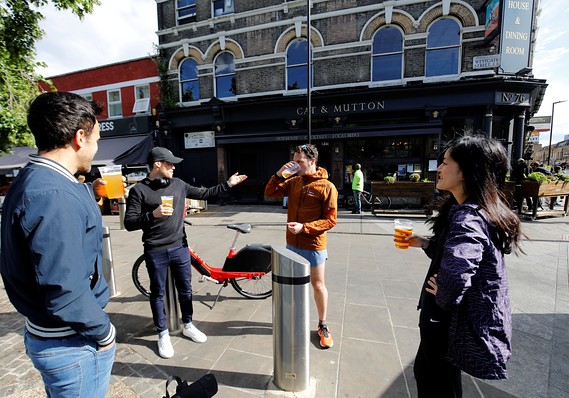 Getty Images
Customers chat as they drink their takeaway draft beer in plastic cups outside a pub in Broadway Market, London.

Brits face a longer wait before they can enjoy a pint in a pub after the government dismissed reports that watering holes could reopen in less than two weeks.

Business secretary Alok Sharma confirmed plans for non-essential shops to reopen on Monday but said pubs and restaurants would have to wait until July 4 “at the earliest.”

Pubs in the U.K. have now been closed for more days in 2020 than they have been open.

Read: The British pub faces ruin. The government must act

A number of pubs, including hundreds in London, have been offering takeaway pints in recent weeks. The move has proved popular among punters with many enjoying their first pub-poured pints in months on the side of the street across the capital.

But Sharma said guidance for pubs, restaurants, hairdressers and barbers on how to reopen safely would be published in due course, sticking to the previously announced date of July 4 despite reports ministers were lining up June 22. The British Beer and Pub Association (BBPA) had called for clarity over reports pub gardens could be allowed to open later this month. The trade body estimated that 27,000 of the 47,000 pubs in the U.K. had beer gardens and said that many needed more notice to reopen.

See Also: England takes a baby step out of lockdown opening some schools and markets

The government also remained unmoved despite calls to reduce its 2-meter social distancing rule — the World Health Organization advises people to stay at least one meter apart and many countries also advise shorter distances. The BBPA and the trade association U.K. Hospitality have both called for the two-meter rule to be halved to protect businesses and millions of jobs. Cutting the distance to one meter would increase the number of pubs able to safely reopen from one-third to three-quarters, the BBPA estimated.

Sharma said the distance was being “kept under review” but would remain in place for the time being.

Non-essential retailers will also have to comply with social distancing rules and a number of other “Covid-secure” guidelines in order to open their doors on Monday.