A federal push for scientific research would boost productivity, rebuild cities that have been left behind

By Jonathan Gruber and Simon Johnson of Project Syndicate 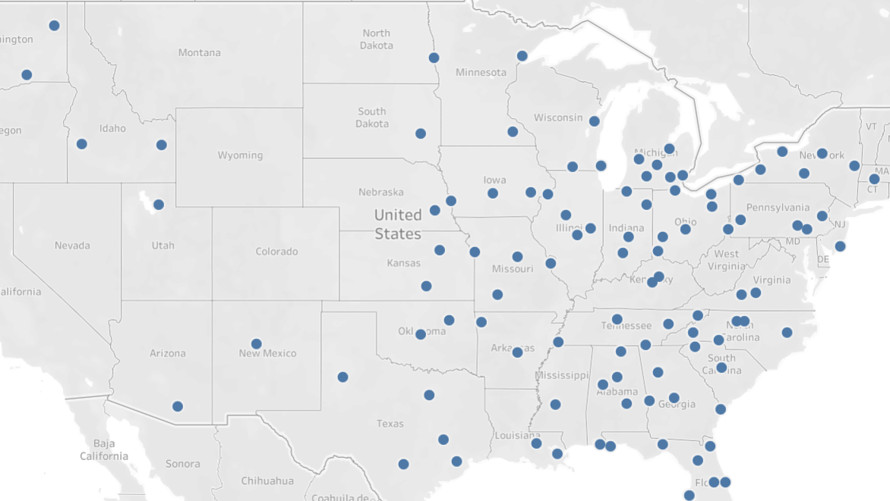 Gruber & Johnson
This map shows some of the cities that could benefit from a federal push in support of science and technology.

WASHINGTON ( Project Syndicate ) — The modern American economy was shaped by four major infrastructure initiatives, each of which was too big for the private sector to take on alone: the continent-wide railroad network, the interstate highways, the air traffic control system, and the Internet.

Early development of all of them was supported by the public sector, and each dramatically reduced the cost of transport and communications, making it easier, cheaper, and safer to move goods, people, and information.

Unfortunately, the U.S. is not making the best use of one of its biggest advantages, relative to its international competitors: a lot of smart people are dispersed, for historical reasons, across many cities. Any effective infrastructure strategy must reckon with the problem of coastal economic agglomeration.

With the potential for a major new infrastructure push on the horizon, one obvious priority is to rebuild and renew crumbling parts of the existing systems. But the United States can do even better, for productivity and job creation, by considering who and what needs to be better connected to the fast-moving scientific frontier.

Historically, innovation has generated faster growth and good jobs. But America has lost its innovative edge in basic science — and with it many of the high-paying jobs that go with creating knowledge and turning it into goods that consumers want.

The best way to regain that edge is to prioritize our public investments in a forward-looking manner, one that engages people and places across the U.S. in the processes that generate new ideas and breakthrough products.

The geography of opportunity

These places are doing well in terms of creating new ventures and relatively well-paid jobs, but they are also extremely crowded, with high real-estate prices that continue to rise. Many talented people find it hard to break into these labor markets, and lower-income residents are increasingly being pushed out.

Existing efforts to address the problem of extreme agglomeration have gone nowhere. Improving access to affordable housing in these “superstar cities” requires significant zoning modification — a glacial process, or even a political nonstarter, in places like Boston, Washington, or San Francisco.

Policy makers could also work to improve transportation links between the rest of the country and these hubs of economic activity. But while high-speed trains work well in China and Europe, efforts to deploy them in the United States have gone precisely nowhere in recent decades. Expanding air routes could help some places, but the most dynamic cities already have crowded air space and a great deal of noise pollution.

A better approach, which we recommend in our new book, “Jump-Starting America,” is to increase dramatically public investment in basic science — the bedrock of research and development — and to spread this effort around the country. This strategy aims to boost productivity and strengthen national cohesion by connecting more people to more opportunities.

Unfortunately, the U.S. is not currently making the best use of one of its biggest advantages, relative to its international competitors: a lot of smart people are dispersed, for historical reasons, across many cities.

Our index of potential next-generation tech hubs identifies 102 places across the country that have large, highly educated populations, strong universities, relatively low housing costs, and easy commutes. These places are located in 36 states and are home to 80 million Americans.