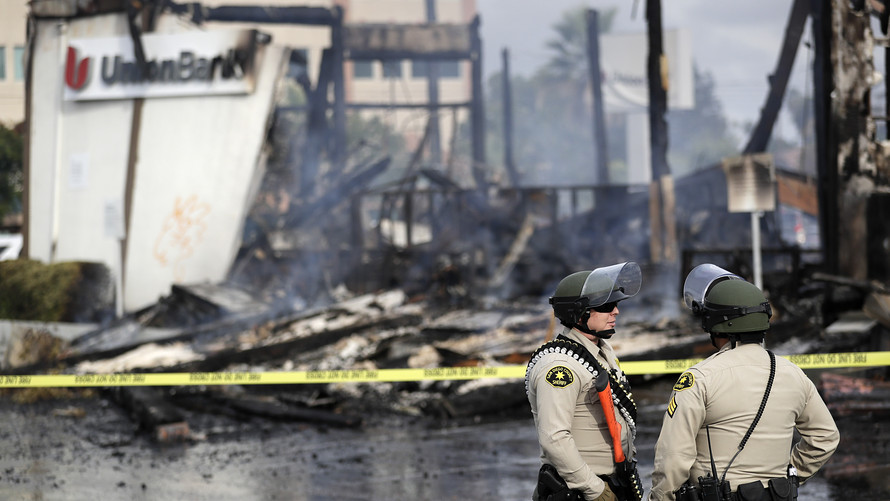 Nearly 400 people were arrested in Los Angeles on Saturday as protests have become increasingly violent over several nights because of outrage over the Minneapolis police killing of George Floyd, Police Chief Michel Moore said. He said he hoped the National Guard and additional officers deployed would curb that trend.

Across the state, devastated shop owners cleaned up shattered glass, assessed damage and boarded up windows while firefighters mopped up hot spots from lingering fires.

In Emeryville, across the bay from San Francisco, where thieves stormed shopping malls around sunset Saturday, snatched flat screen TVs, shoes and other goods, Keyla Calderon swept up glass outside Uniform Advantage, a shop that sells medical scrubs.

Calderon’s store had just reopened last week after being shuttered for six weeks under California’s stay-at-home order to stem the spread of the coronavirus. She said she had just returned home Saturday when she got a call from a security company that the store’s burglar alarm was triggered.

She turned on the news to see live helicopter shots of people breaking into her shop and others at an outdoor mall. They smashed glass doors, stole clothes and computers and destroyed the cash register.

“To hear the alarm ring and see people destroy the store before my eyes, it was heartbreaking,” Calderon said. “We’re all working hard to feed our family. We have nothing to do with these injustices, yet we’re paying the consequences.”

Gov. Gavin Newsom deployed 1,000 members of the Guard to assist the 20,000 officers of the Los Angeles police and sheriff’s departments, Mayor Eric Garcetti said. The San Francisco police chief said about 200 outside officers were en route.

Los Angeles County declared a 6 p.m. to 6 a.m. curfew for its 10 million residents, though the cities of Santa Monica and Beverly Hills, which experienced looting on Saturday, imposed 4 p.m. curfews. San Francisco set a curfew of 8 p.m. , and San Jose had an 8:30 p.m. curfew.

Protests continued Sunday throughout the state. While most were peaceful, there were flareups near where some of the protests took place.

Unrest in coastal Santa Monica happened not far from a peaceful demonstration near the city’s famous pier as a group of looters targeted shops near the popular Third Street Promenade. They broke into a Gap store and a Vans sneaker store, where KTTV footage showed people walking out with boxes of shoes with no police in sight.

A woman in a tank top holding a sign saying “End All Violence” tried to block a man with a hammer from smashing the door of REI, the outdoor supply store. The man yanked her from the door. But she returned to the doorway and another protester joined her and the vandals eventually moved on.

Looters later shattered the store’s windows and walked away with folding chairs, a bike and backpacks. A fire broke out at a restaurant across the street.

“We’re here because George Floyd was murdered in cold blood,” Aliasiah Allah said. “We are sick of the countless injustices on black and brown lives, mostly black lives.”