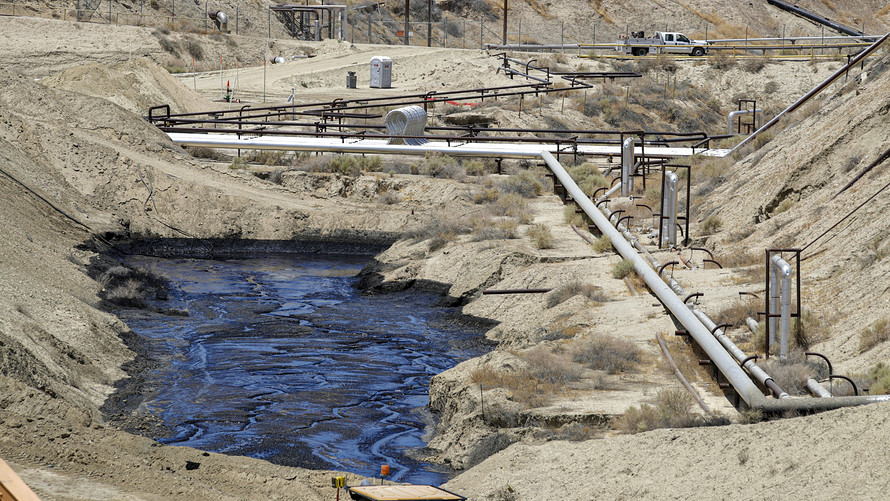 Associated Press
A crew works on seepage of 800,000 gallons of oil and brine water oil from an abandoned well in Chevron Corp's Cymric oilfield in McKittrick, Calif. Gov. Gavin Newsom's administration has temporarily banned new oil wells in the state.

California Gov. Gavin Newsom cracked down on oil producers Tuesday, halting approval of hundreds of fracking permits until independent scientists can review them and temporarily banning another drilling method that regulators believe is linked to one of the largest spills in state history.

The state Division of Oil, Gas and Geothermal Resources announced it will not approve new wells that use high-pressure steam to extract oil from underground. It’s the type of process Chevron uses at an oil field in the Central Valley that leaked more than 1.3 million gallons (4.9 million liters) of oil and water this summer.

That process is different from fracking, which uses water and other chemicals at high pressure to extract oil. California has 263 pending fracking permits but has not approved any of them since July. That’s when Newsom fired California’s top oil and gas regulator after learning the state had increased fracking permits by 35% since he took office in January, angering environmental groups.

Newsom, a Democrat, called the crackdown necessary to strengthen the state’s oversight of oil and gas extraction “as we phase out our dependence on fossil fuels and focus on clean energy sources.”

“This transition cannot happen overnight; it must advance in a deliberate way to protect people, our environment and our economy,” Newsom said.

California has been a leader on environmental issues, with Newsom’s Democratic predecessor, Jerry Brown, making climate change his signature effort. Brown was criticized for failing to ban fracking or oil drilling, arguing that the state needed to tackle demand before moving on to supply.

“Every barrel delayed or not produced in this state will only increase imports from more costly foreign sources that do not share our environmental safety standards,” group president Catherine Reheis-Boyd.

California is one of the top five states for oil production, producing more than 161 million barrels last year. Fracking occurs in some of the state’s largest oil fields, mostly in the Central Valley.

The steam method is less prevalent but accounted for 8 million barrels of the state’s oil production in 2018, according to the Department of Conservation. But regulators believe it is linked to the oil spill at a Chevron /zigman2/quotes/205871374/composite CVX -0.58%   well that began in May.

It was the largest oil spill in California since 1990, when a tanker unleashed more than 400,000 gallons (1.5 million liters) of crude oil off the coast of Huntington Beach.

But despite its size, the Chevron spill has had minimal effects on the environment.

The oil spilled into a dry creek bed, and the company cleaned it up before rains could wash it into fresh water. It also did not significantly harm wildlife, with just a “handful of birds” needing to be euthanized, according to Jason Marshall, chief deputy director of the California Department of Conservation.

A second well at the oil field about 35 miles (55 kilometers) west of Bakersfield has been leaking intermittently since 2003. State officials ordered Chevron to stop the leak in April, and the company has been making progress, Marshall said.

Read : This is not your grandfather’s utility sector, T. Rowe Price says

Regulators have fined the energy giant $2.7 million for the leaks. A Chevron spokeswoman referred comment to the Western States Petroleum Association, whose leader said, “There is nothing more important than the health and safety of the communities where the women and men of our industry work, live and raise their families.”

The moratorium will be in place while two national laboratories — Lawrence Livermore and Sandia — study the high-pressure steam process to see what regulations, if any, can make it safer. Other wells in California use the steam method and have not had any spills.

“These oil leaks cannot be the cost of doing business,” California Natural Resources Secretary Wade Crowfoot said. “There needs to be a clear trajectory to eliminate them. Not reduce them in number, but fully eliminate them.”

The moratorium will not affect existing wells, which will be assessed individually. Some existing wells have been using high-pressure steam for so long that stopping it could weaken the geology and cause more spills, Crowfoot said.

Officials said they would seek an independent audit of California’s permitting process for fracking and other types of oil extraction.

Read : All that a ‘President Warren’ could change just by executive order

In July, advocacy groups Consumer Watchdog and FracTracker revealed the state’s fracking permits had doubled during the first six months of Newsom’s administration. The groups said that of those permits, 45% benefited companies where state officials owned stock.

“The ultimate test of his tenure for climate change and the public will be simple math about how many fewer permits are issued and how many existing wells are closed,” Court said. “Net zero wells should be his goal.”