California wildfires some of largest in state history

Five people are reported to have died and at least 100,000 have been told to leave their homes. 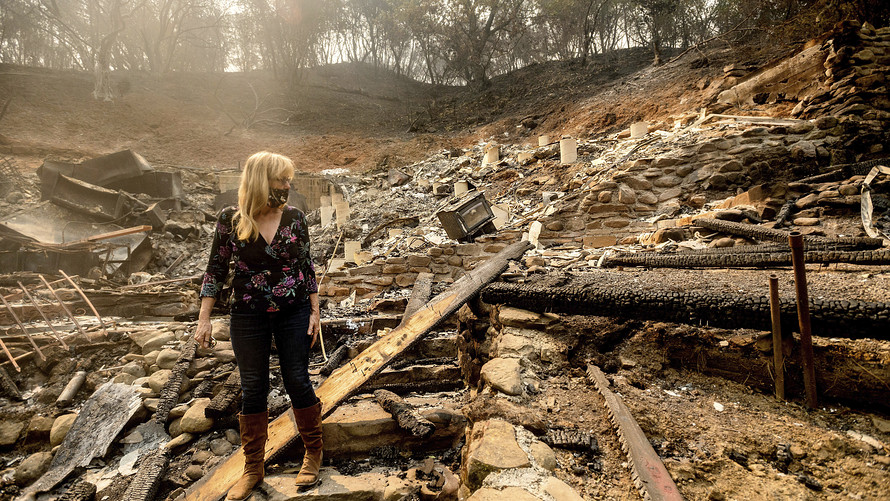 AP
Pam, who declined to give a last name, examines the remains of her partner's Vacaville, Calif., home on Friday, Aug. 21, 2020. The residence burned as the LNU Lightning Complex fires ripped through the area Tuesday night.

Lightning-sparked wildfires in Northern California exploded in size Friday to become some of the largest in state history, forcing thousands to flee and destroying hundreds of homes and other structures as reinforcements began arriving to help weary firefighters.

Governor Gavin Newsom has called in fire-fighting help from other American states, and from Canada and Australia, too. Five people are reported to have died and at least 100,000 have been told to leave their homes. Often caused by lightning-strikes, the roughly 560 fires have created hazardous breathing conditions on the west coast and sent smoke rolling as far as Nebraska to the east.

The number of personnel assigned to the sprawling LNU Complex — a cluster of blazes burning in the heart of wine country north of San Francisco — doubled to more than 1,000 firefighters Friday, Cal Fire Division Chief Ben Nicholls said.

“I’m happy to say there are resources all around the fire today. We have engines on all four sides of it working hand-in-hand with the bulldozers to start containing this fire, putting it to bed,” Nicholls aid.

Fire crews with help from “copious amounts of fixed-wing aircraft” were working Friday to stop a large blaze from reaching communities in the West Dry Creek Valley of Sonoma County, he said.

The blazes, coming during a heat wave that has seen temperatures top 100 degrees, are taxing the state’s firefighting capacity but assistance from throughout the country was beginning to arrive, with 10 states sending fire crews, engines and aircraft to help, Gov. Gavin Newsom said.

“We have more people but it’s not enough. We have more air support but it’s still not enough and that’s why we need support from our federal partners,” Newsom said.

Newsom thanked President Donald Trump’s administration for its help a day after pushing back on Trump’s criticism of the state’s wildfire prevention work, saying that he has a “strong personal relationship with the president.”

“While he may make statements publicly, the working relationship privately has been a very effective one,” Newsom said.

There are 560 fires burning in the state, many small and remote but there are about two dozen major fires, mainly in Northern California. Many blazes were sparked by thousands of lightning strikes earlier in the week.

Tens of thousands of homes were threatened by flames that drove through dense and bone-dry trees and brush. Some fires doubled in size within 24 hours, fire officials said.

“We had last night three separate rescues that pulled our vital, very few resources away,” he said.

An anxious Rachel Stratman, 35, and her husband, Quentin Lareau, 40, waited for word Friday about their home in the Forest Springs community of Boulder Creek, in Santa Cruz County, after evacuating earlier this week. She knew one house burned but received conflicting information about the rest of the neighborhood.