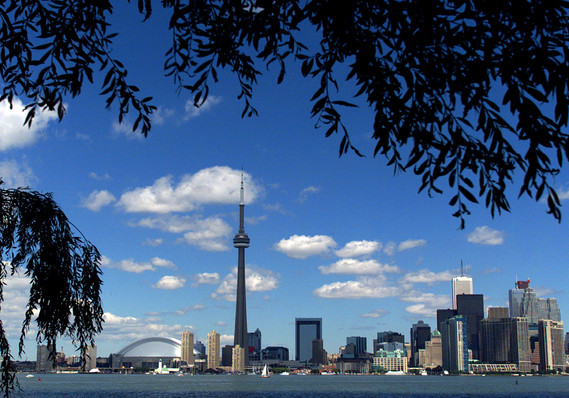 Getty Images
The CN Tower and the Skydome highlight the Toronto skyline. More U.S. tech startups’ operations are likely to expand to Canada in the wake of Trump administration visa rules, say venture capitalists and entrepreneurs.

In late June, the administration barred many foreign workers from entering the U.S. through the end of the year, including many tech specialists on H-1B visas.

People.ai, an artificial intelligence-driven sales management platform provider based in San Francisco, is one company looking to the U.S.’s northern neighbor. The company is opening an office in Toronto, which will allow its foreign workers to be relocated to Canada if they are forced out of the U.S., said founder and chief executive Oleg Rogynskyy.

“There have been so many changes to the immigration situation that happened in the last three months. Most of them are negative, and the dynamic is that nobody knows what else is going to happen,” said Rogynskyy.

In 2019, 22 venture-backed San Francisco Bay Area startups opened offices in Canada, more than the total number from 2009 to 2016, according to research by Inovia Capital, a technology-focused venture capital firm. Coursera and Postmates set up both offices and remote engineering hubs in Canada last year.

Through the first six months of 2020, 10 more startups were in the process of setting up offices in Canada, said Antoine Nivard, Inovia Capital’s principal.

Also read: This one sector will be the hardest hit by Trump’s suspension of H-1B work visas.

Canada’s Global Talent Stream program allows companies to hire skilled workers within weeks. In comparison, the U.S. only issues 85,000 H-1B visas each year and visa processing can take months. As a trade-off, the program encourages — but doesn’t require — companies to recruit Canadians and permanent citizens before transferring engineers through the Global Talent Stream program.

“Overall, there are not many options as good as Canada right now,” Rogynskyy said.

The Trump administration’s proclamation on immigrant workers may block about 29,000 foreign workers on H-1B visas from entering the U.S. this year, according to an estimate by the Migration Policy Institute, a pro-immigration advocacy group.

“Even before the proclamation, the extra scrutiny given to visa applicants under the Trump administration, the visa processing and the Green Card backlog have already been pushing people who employ tech workers to look at Canada instead of the United States,” said Julia Gelatt, a senior policy analyst at the institute.

Wonolo Inc., an on-demand staffing platform provider, is another tech company that wants to tap into Canada’s engineering talent pool. The San Francisco-based company has an engineering team of 40, with 15 working from its Toronto office, which opened last year.

“I expect in the next 12 to 18 months, we would double the size of the team in Toronto,” Burton said. “We’re overall very happy with the quality of the talent, so we plan to invest.”

The company also plans to transfer some key talent from Vietnam to Canada. “It’s much easier to get a visa for them to work in Canada than in the United States,” he said.