CEOs lower forecast for U.S. economy for the seventh quarter in a row 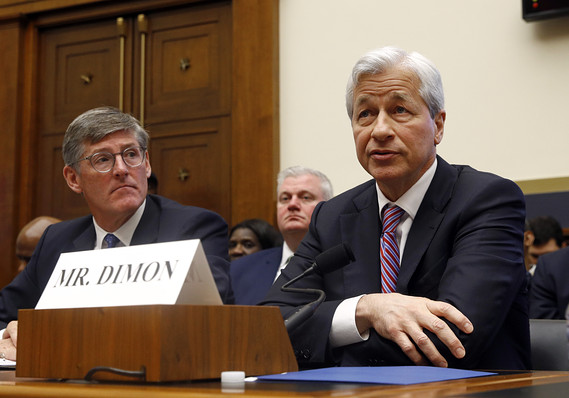 Associated Press
JPMorgan Chase CEO Jamie Dimon, right, and top executives at the largest companies in America predict slower economic growth in the next six months. Dimon is chairman of the Business Roundtable.

The CEOs of America’s biggest companies say they expect to hire fewer people and invest less in the next six months owing to lingering worries about the economy.

The Business Roundtable on Wednesday said an index that measures CEOs’ outlook for the economy fell for the seventh quarter in a row. The index slipped 2.5 points to 76.7, a bit below its historic average.

The index had hit an all-time high of 118.6 in the first quarter of 2018, shortly after the passage of President Trump’s tax cuts for individuals and businesses.

“CEOs remain cautious in the face of uncertainty over trade policy and an associated slowdown in global growth and the U.S. manufacturing sector, which is currently contracting,” the Roundtable said.

In a separate question, nearly half of all top executives polled said labor is their biggest cost pressure, reflecting an environment of extremely low unemployment in which companies have to offer higher wages to compete.

Some 14% cited regulations and 11% pointed to higher costs of raw materials and other supplies.

The Roundtable represents large companies that employ some 15 million people and generate $7.5 trillion in annual revenue. The group has been doing its quarterly survey since 2002.