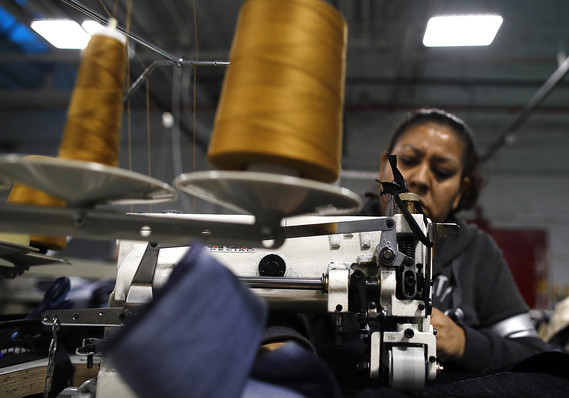 Enlarge Image
An employee operates a sewing machine to stitch a pair of jeans at the Dearborn Denim facility in Chicago.

The numbers: A measure of business conditions in the Chicago region dropped further into contraction territory in July. The Chicago PMI business barometer decreased to 44.4 in July from 49.7 in June, MNI Indicators said Wednesday. That’s the lowest since December 2015. Any reading below 50 indicates worsening conditions. And readings below 45 are especially worrying. Economists had expected a rebound to 50.5, according to Econoday.

What happened: Four out of the five components were in contraction territory in July with only the supplier delivery index above 50. The production index hit a 10-year low. In a special question, only 14% of manufacturers expected the economy to pick up.

Big picture: Economists use the Chicago PMI and other regional indicators to gauge the health of the national Institute for Supply Management manufacturing index. The ISM fell to 51.7% in June, its lowest level in two years. This month, the regional surveys point to further weakening in U.S. manufacturing. The ISM will release their July factory index on Thursday at 10 a.m.

What are they saying? Some economists quickly said the weakness in the Midwest manufacturing would prompt the Fed to cut interest rates by a half-point at their policy meeting that ends later Wednesday but most economists see a quarter-point move.

Market reaction: Stocks were higher as investors anticipated a Federal Reserve rate cut at 2 p.m. Eastern. The Dow Jones Industrial Average /zigman2/quotes/210598065/realtime DJIA +0.40%  was up 59 points to 27,257 in morning trading.