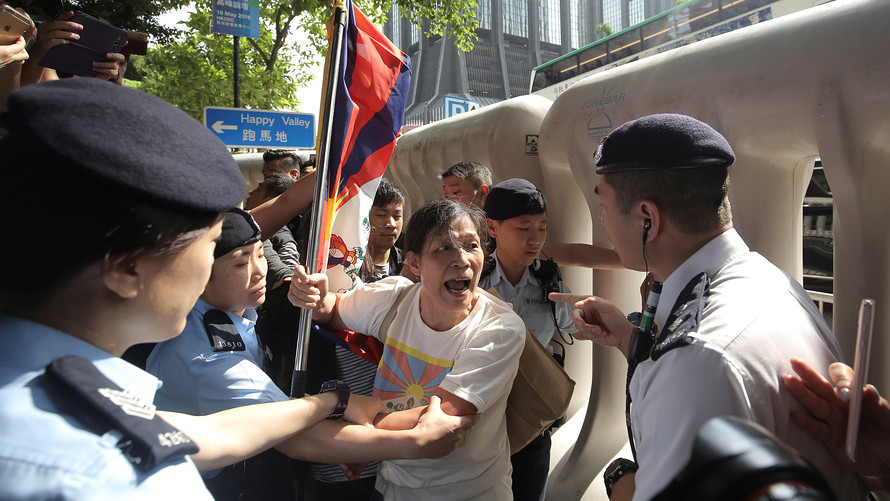 Stocks in China were down sharply Wednesday, with losses spreading across most of Asia, as investors worried about the nation’s tighter grip on its markets, which added to concerns about higher U.S. interest rates.

Zhang, the Chinese Communist Party’s No. 3 official, instead focused his speech in Hong Kong on China’s “Belt and Road” initiative to develop trade and infrastructure links between China, the rest of Asia and Europe.

Across the region, stocks were hit by worries about the potential fallout of higher U.S. interest rates on riskier assets. Upbeat U.S. economic data and comments from U.S. Federal Reserve officials helped to heighten investor expectations that interest rates there will rise as early as June.

Investor sentiment toward China is turning gloomy for a number of reasons. Several state and local media reports suggested Beijing is tightening its grip on financial markets, ranging from getting tougher on the amount of leverage investment products can take on, to clamping down on speculation surrounding backdoor listings and false buyout announcements among listed firms.

And, “it’s weighing on stocks at a time when there is also confusion over monetary policy onshore and the political landscape is shifting,” he said.

In Japan, shares /zigman2/quotes/210597971/delayed JP:NIK -0.23% fluctuated around break-even levels following stronger-than-expected gross domestic product figures, which reduce hopes for more policy measures such as the delay of a planned sales tax increase. Japan’s economy grew 0.4% in the first quarter compared with the previous one, beating expectations for a 0.1% expansion.

Shares of Suzuki Motor Corp. /zigman2/quotes/201794956/delayed JP:7269 +1.33%  plummeted as much as 15% in the afternoon session after the car maker admitted to having used improper mileage data for 16 models it sells in Japan.

— Ewen Chew and Yoko Kubota contributed to this article.