General warns of unspecified countermeasures: ‘China will not sit idly by’ 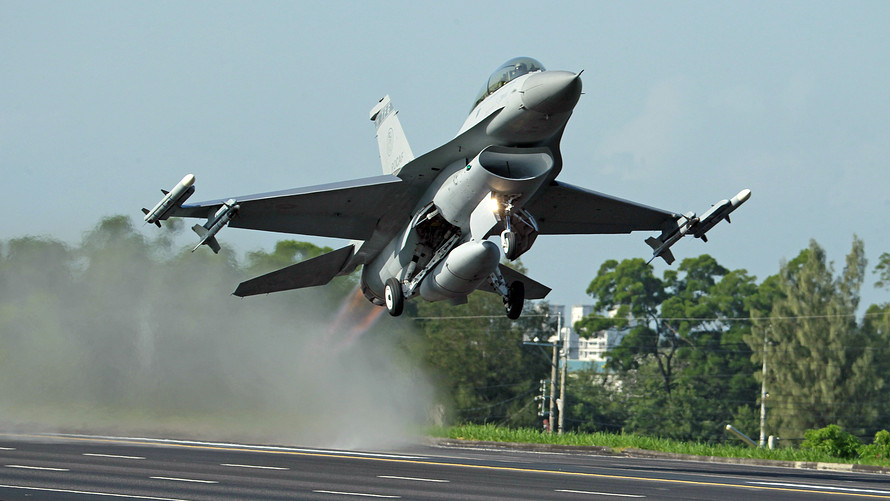 Associated Press
A Taiwan Air Force F-16 fighter jet takes off from a closed section of highway during the annual Han Kuang military exercises in 2014.

BEIJING — China “will not sit idly by” if the U.S. proceeds with a sale of advanced F-16V fighter jets to Taiwan, a Chinese general said, while warning of other potential countermeasures in addition to punishing foreign firms involved in the deal.

Beijing considered the sale a violation of previous U.S. commitments to China regarding the island it considers its own territory to be annexed by force if necessary, Maj. Gen. Chen Rongdi, chief of the Institute of War Studies at the Academy of Military Sciences, said. He did not elaborate on what additional measures China might take.

“China will not sit idly by,” Chen said Thursday at a forum sponsored by China’s official journalists’ association. “Of course, we don’t rule out additional measures.”

Beijing has repeatedly said it will levy sanctions against U.S. companies linked to a planned $8 billion sale and demanded Washington cancel it immediately. China has made such threats regarding previous arms sales by the U.S., but they’ve had limited effect because the companies involved are either important to China’s own nascent commercial aviation industry or have little or no business with the country.

Most recently, China pledged sanctions against the U.S. in July when the Trump administration said it was considering a $2.2 billion sale of tanks and air missiles to Taiwan.

Both Chen and Col. Cao Yanzong, a research fellow at the institute, dismissed the ultimate effectiveness of the F-16V planes, given China’s overwhelming air superiority and arsenal of short to medium-range missiles.

The sale would be of little use “beyond making profits for American arms makers, while further undermining relations between China and the U.S. and China and Taiwan,” said Cao.

China fiercely opposes all arms sales to Taiwan but has specifically objected to advanced fighter jets such as the F-16V, whose Active Electronically Scanned Array, or AESA, radar is compatible with the F-35 stealth fighters operated by the U.S. Air Force, Navy and Marines. The U.S. is also installing upgraded electronics, including AESA radars, on Taiwan’s existing fleet of 144 older F-16s.

The Trump administration informed Congress last week that it plans to sell Taiwan 66 of the planes and the U.S. State Department this week approved the sale. It now goes before Congress, where Taiwan enjoys strong bipartisan support.

Despite a lack of formal diplomatic ties, U.S. law requires Washington to ensure Taiwan has the means to defend itself.

Taiwan is a democratically governed island that broke away from the Communist Party-ruled mainland during a civil war in 1949.

China has been stepping up military, diplomatic and economic pressure against the administration of Taiwanese President Tsai Ing-wen, who has refused to embrace Beijing’s “one-China principle” that regards Taiwan as Chinese territory.

A semi-annual defense ministry report issued last month stated that China “has the firm resolve and the ability” to take control of Taiwan. “We make no promise to renounce the use of force, and reserve the option of taking all necessary measures,” the report said.

The document, titled “China’s National Defense in the New Era,” also pointed to specific intimidation tactics cited by many as partial justification for strengthening Taiwan’s defenses.

“Aiming at safeguarding national unity, China’s armed forces strengthen military preparedness with emphasis on the sea,” the report said. “By sailing ships and flying aircraft around Taiwan, the armed forces send a stern warning to the ‘Taiwan independence’ separatist forces.”

Get news alerts on Lockheed Martin Corp. — or create your own.