Bulletin Join live event at noon Eastern: What can we expect Year 3 of pandemic to bring? »
Investor Alert 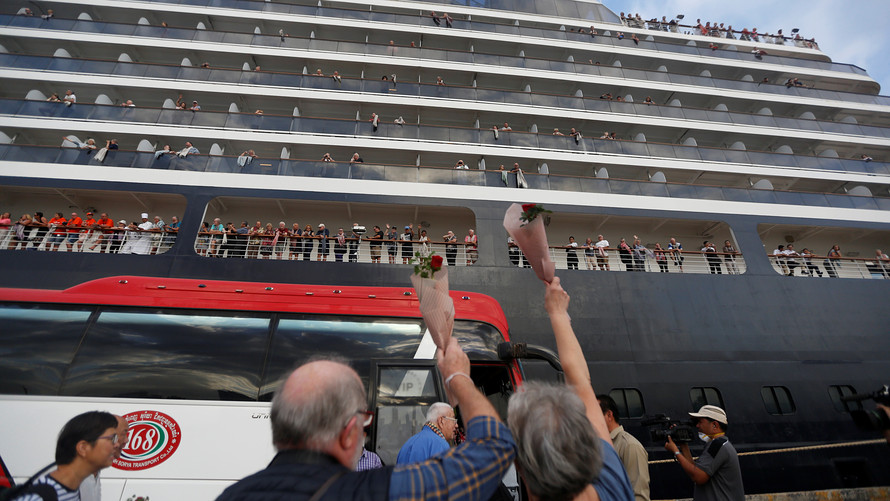 Reuters
Passengers wave their hands after they depart from MS Westerdam, a cruise ship that spent two weeks at sea after being turned away by five countries over fears that someone aboard might have the coronavirus, as it docks in Sihanoukville, Cambodia on Friday.

BEIJING — China on Friday reported another sharp rise in the number of people infected with a new virus, as the death toll neared 1,400.

The National Health Commission said 121 more people had died and there were 5,090 new confirmed cases.

The number of reported cases has been rising more quickly after the hardest-hit province changed its method of counting them Thursday. There are now 63,851 confirmed cases in mainland China, of which 1,380 have died.

Hubei province is now including cases based on a physician’s diagnosis and before they have been confirmed by lab tests. Of the 5,090 new cases, 3,095 fell into that category.

The acceleration in the number of cases does not necessarily represent a sudden surge in new infections of the virus that causes COVID-19 as much as a revised methodology.

China’s health commission has said that the change was aimed at identifying suspected cases in which the patient has pneumonia so they can be treated more quickly and reduce the likelihood of more serious illness or death. It was also seen as a reflection of a chaotic crush of people seeking treatment and the struggle to keep up with a backlog of untested samples.

“Clearly in Wuhan, the health system is under extreme pressure and so the first priority has to be the patient,” said Mark Woolhouse, a professor of infectious disease epidemiology at the University of Edinburgh.

Elsewhere, hundreds of cruise ship passengers long stranded at sea by virus fears cheered as they finally disembarked Friday and were welcomed to Cambodia by the nation’s authoritarian leader, who handed them flowers.

Prime Minister Hun Sen agreed to let the Westerdam dock at the port of Sihanoukville on Thursday after Thailand, Japan, Taiwan, the Philippines and Guam had barred the ship earlier.

“Today, although Cambodia is a poor country, Cambodia has always joined the international community to solve the problems that the world and our region are facing,” he said as the first passengers disembarked.

The Westerdam was unwelcome elsewhere even though operator Holland America Line said no cases of the COVID-19 viral illness have been confirmed among its 1,455 passengers and 802 crew members. Some 20 passengers had reported stomachaches or fever, but tests for the virus done at the Pasteur Institute in Phnom Penh showed none had the illness.