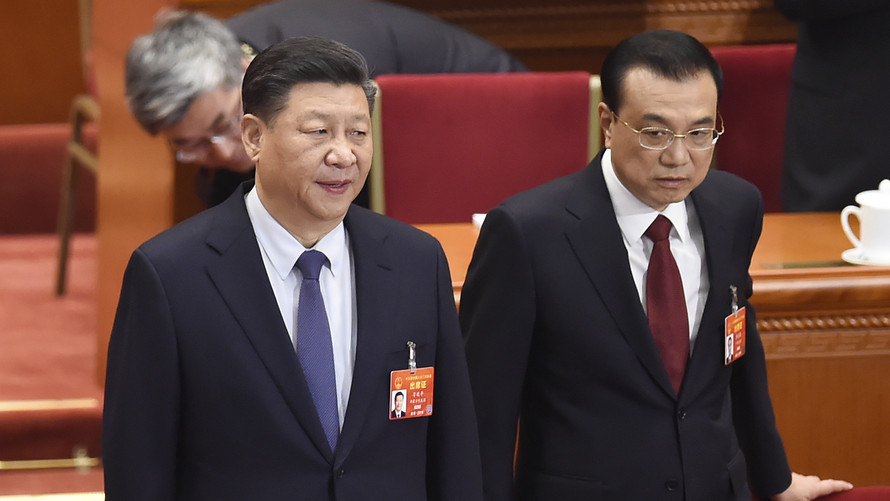 AFP/Getty Images
Chinese President Xi Jinping, left, and Premier Li Keqiang arrive for the opening session of the National People's Congress at the Great Hall of the People in Beijing on Tuesday.

BEIJING — China’s top economic official announced a robust annual growth target and a 7.5% rise in military spending on Tuesday as its ceremonial legislature opened a session overshadowed by a tariff war with Washington.

In a bid to defuse U.S. and European trade complaints, Premier Li Keqiang promised in a speech to the National People’s Congress that foreign companies would be “treated as equals” with Chinese enterprises.

Li set this year’s growth target at 6% to 6.5%, reflecting official determination to shore up a cooling economy and prevent politically dangerous job losses in the face of U.S. tariff hikes and weaker global demand. It is off slightly from last year’s 6.6% growth, a three-decade low, but would be among the world’s strongest if achieved.

President Xi Jinping’s government is expected to use the congress to announce measures to support economic growth including a possible tax cut and more support for entrepreneurs.

Legislators also are due to endorse a law that aims to ease tensions with Washington and Europe by discouraging officials from pressuring foreign companies to hand over technology. The battle with Washington was sparked by complaints Beijing violates its free-trade obligations by stealing or requiring companies to give up technology as the price of market access.

The two-week gathering of the congress’s 3,000-plus delegates in the cavernous Great Hall of the People is China’s highest-profile event of the year but does little lawmaking work. Instead, it serves as a platform to highlight plans for the year and set the tone for government work.

A gathering of noncommunist groups held at the same time draws tech billionaires, movie stars and ethnic minorities to the Chinese capital.

Li, the No. 2 leader in the ruling party behind Xi, said Beijing will step up spending on technology development including artificial intelligence, electric cars, biotechnology and new materials.

China’s emergence as a potential global competitor in smartphones, solar power and some other technologies has increased the range of products available to consumers and helped to drive down prices. But it also rattles Washington and other governments that worry Chinese competition is a threat to their industries and employment.

Spending on the Communist Party’s military wing, the People’s Liberation Army, will rise to 1.2 trillion yuan ($178 billion), the premier said. China’s total military spending, the second-largest behind the United States, is estimated by independent experts to exceed $220 billion a year.

Li said the central government budget deficit would rise from 2.6% of total economic output to 2.8%. That reflects efforts to prop up growth by injecting money into the economy through higher spending on public works construction and other initiatives.

The world’s second-largest economy faces a “graver and more complicated environment” and risks that “are greater in number and size,” the premier warned.

The tariff battle with President Donald Trump over Beijing’s technology ambitions has rattled Chinese consumers and investors who also are worried about weakening real estate and auto sales. That is prompting some to put off spending, which could add to downward pressure on economic growth.

News reports say Washington and Beijing might be close to an agreement to end the battle. But the chief U.S. envoy, Trade Representative Robert Lighthizer, said earlier the two sides still had much work to do.

No agreements have been announced on the core of the dispute: U.S. pressure on Beijing to roll back plans for state-led creation of global competitors in robotics and other technology.