China’s economic problems will come to a head in 2017

Faced with a heavy debt load, the Asian nation would find it difficult to absorb an external shock such as a U.S. trade war 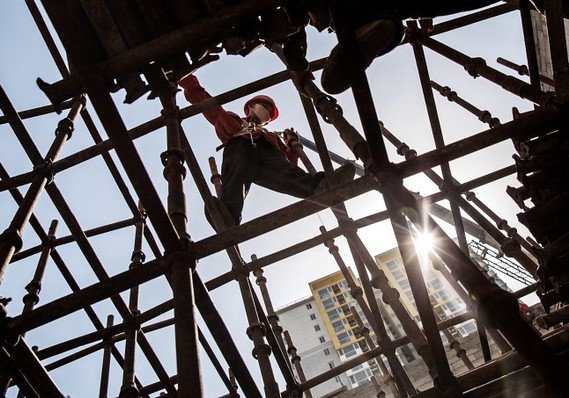 Getty Images
For most of China’s deeply indebted companies, another prolonged slump in the country’s housing sector could be catastrophic.

Next year is shaping up to be a decisive one for China’s economy.

In the eight years since the global financial crisis struck, the vitality and importance of low-cost exports — the kind the Chinese economy used to rely on — have steadily declined. Scrambling to prop up the country’s growth and protect its near-universal employment, China’s leaders have embraced monetary and fiscal stimulus measures, causing the country’s outstanding debt to balloon to almost 250% of gross domestic product.

Corporate debt, by far the largest share of China’s total debt, has likewise surged by more than 60% to top 165% of GDP. Now, a nationwide debt crisis looms at Beijing’s doorstep amid business defaults and bankruptcies, low industrial profits, winnowing returns on investment and the very real prospect of yet another slowdown in the real estate sector. How well Beijing manages these problems in the months ahead will, to a great extent, determine China’s economic, social and political stability for years to come.

China’s economy has always depended heavily on investment into fixed assets such as roads, railways and apartment complexes. But over the past decade, as cheap exports’ share of the economy has collapsed and as household consumption has continued to slide, this investment has become one of the primary drivers of economic growth and employment in China — and, by extension, a cornerstone of its stability.

That much of China’s fixed asset investment comes from the country’s biggest state-owned banks (including the “Big Four,” which answer directly to Beijing) not only highlights its importance as a policy tool but also explains why Chinese leaders have wielded it so liberally to offset weaknesses in other areas of the economy.

Of course, the funds for such ample investment have to come from somewhere, and over the years Beijing has gotten them through many different means. From slashing benchmark interest rates and bank reserve requirements to boosting domestic equity markets and direct spending, the Chinese government has paid for its purchases in several ways.

The vast majority of Beijing’s investment, however, has been financed by debt, whether in the form of loans, bonds or other types of formal and informal lending. Most has come from state-owned banks: In 2015, outstanding bank loans equaled 141% of GDP, while outstanding bonds totaled 63% of GDP. Whereas countries such as the United States and Japan tend to spur growth by stimulating equities or hiking government spending, China has used its control over the banking sector to shape the cost of capital and determine where and how fast it flows.

Unsurprisingly, the lion’s share of the money has been funneled into China’s immense state-owned enterprises, which largely explains why they hold an outsize share of the country’s corporate debt. (State-owned companies account for over 55% of that debt, despite contributing only 20% of GDP.) It also explains why, by comparison, China’s central government has an unusually low level of debt. (Beijing’s debt equaled only 22% of GDP in 2015.) 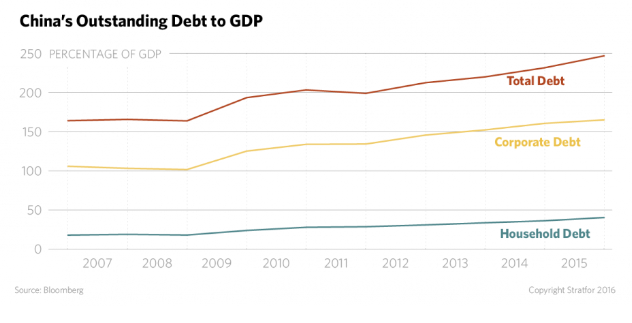 Not long after the 2008-09 financial crisis hit, it became clear that China’s supposedly temporary stimulus package was, in fact, the start of a prolonged period of investment-led growth. Local government debts, which at the time were deemed the biggest source of systemic financial risk to the country, became a serious cause for concern. This had less to do with the size of local government debt, which never exceeded 40% of GDP, than it did with its opaque management. After all, almost all local government debt was borrowed and invested by pseudo-corporations known as local government financing vehicles that had no assets or functional management structures whatsoever.

By 2013, Beijing had started to crack down in earnest on wasteful local spending, forcing most of these pseudo-corporations to close their doors. Beijing simultaneously rolled out fiscal reforms designed to reduce local governments’ reliance on debt to pay for their basic infrastructure needs.

Included in these reforms was a program that allowed local governments to swap their debt for cheaper, longer-term municipal bonds. The program, which has grown rapidly since mid-2014, has partially eased fears of a local debt crisis emerging, even if it has not solved the underlying problem — a lack of transparency — that will continue to make local government debt a financial risk. But with the debt-swap initiative and other measures in place to help cities and regions pay off their loans, local debt is unlikely to be the main source of China’s economic woes next year.

Instead that role will likely fall to corporate debt, especially that held by companies in the heavy and construction industries, many of which are state-run. China’s biggest borrowers — property developers, oil and natural gas companies, power utilities, metals and mining companies, and construction and engineering firms — together account for at least 60% of the country’s outstanding corporate debt and are among its most highly leveraged firms. According to Bloomberg, China’s heavy industry, building materials and utilities businesses have average debt-to-equity ratios as high as 85%, 120% and 130%, respectively.

This is a problem for a number of reasons. With the exception of the energy sector, all of these industries are extremely reliant on construction related to real estate, which is thought to account for between 15% and 25% of China’s GDP. Home prices and, to a lesser degree, real estate construction and investment have fared unexpectedly well this year. (In 2014-15, nearly every real estate indicator pointed to a sector-wide downturn in 2016.)

Yet even though more new construction projects have sprung up in 2016 than predicted, the pace of actual construction has continued to crawl. Meanwhile, investment into small residential units — houses of less than 90 square meters (about 970 square feet), which make up the biggest share of investment in residential property — has dropped by 0.8% since 2015, even as investment in larger residential units has risen. And after three consecutive quarters of record-breaking growth in home prices in China’s biggest cities, Beijing has quietly begun to pressure local governments into curbing home purchases and property speculation.

These measures have already started to weigh home prices down in the country’s high-demand housing markets, and they will likely keep declining in the months ahead unless Beijing reverses its policies. 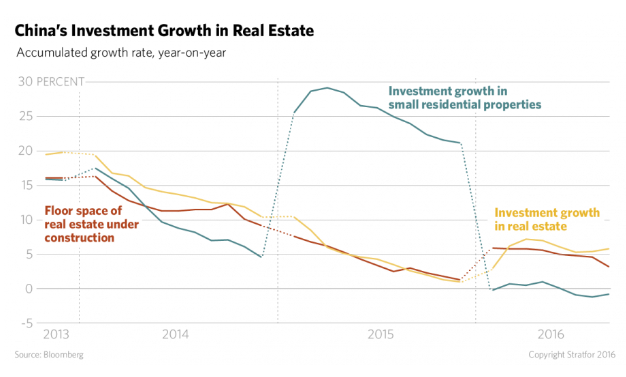 So, although 2016 has brought stronger-than-expected growth to China’s property sector, it has largely been concentrated in the country’s wealthiest cities and has come at the expense of creating more available credit.

At the same time, this growth has had uneven effects on real estate investment and construction. Individually, each of these factors suggests that credit is becoming a less and less efficient means of driving growth in the construction sector, which will limit Beijing’s options in monetary and fiscal policy making in 2017. But combined with what appears to be a push by Beijing to limit increases in home prices — which will put an even bigger drag on real estate investment and construction — the future of China’s housing sector looks grim.

For most of China’s deeply indebted companies, another protracted slump in the housing sector could be catastrophic. On top of their climbing debt-to-equity ratios, Chinese housing and construction firms have seen the maturity periods of new debt shrink over the past few years. Now, Chinese enterprises are issuing far more short-term debts than they did before: In the third quarter of 2016, 82% of all Chinese corporate bonds had maturities of less than three years, compared with just 36% in the same quarter of 2010. (The picture is even grimmer in the construction sector itself.) In other words, more and more Chinese businesses are taking out loans to repay existing debts, rather than to fund long-term investments.

Combined with tighter controls on home-buying and heftier debt burdens, this deepening dependence on short-term loans all but guarantees that more Chinese companies in construction-related industries will default on their debts or declare bankruptcy next year. And because many of these firms are concentrated in northern and central China, these regions will suffer a disproportionate share of the economic and social consequences.

Chinese authorities are not blind to these risks, and they have unveiled several measures aimed at mitigating the worst of the danger. Chief among them are a debt-for-equity swap program, as well as a plan to create special bankruptcy “tribunals” to facilitate corporate bankruptcies and restructurings, which have doubled in 2016 compared with the year before. But it remains to be seen just how effective these solutions will be.

So far, the debt-for-equity swap program has been implemented only on an ad hoc basis, and many banks have reportedly balked at the idea of trading loans for stakes in failing companies, casting doubt on whether Beijing can get the buy-in it needs to make its initiative work. Furthermore, China has little real legal infrastructure for handling bankruptcies, and its dearth of expertise will almost certainly limit how quickly courts can process the corporate bankruptcies piling up in the months ahead.

A year of uncertainty ahead

Within China’s borders alone, there are plenty of reasons to expect Beijing to have trouble making good on its plans to tighten credit and restructure Chinese corporations in 2017. Too many companies are in too dire of financial straits and are too dependent on housing and construction, not to mention that China’s legal and institutional infrastructure is still in its infancy. But there is also an external factor that will make economic reform in China more difficult: U.S. President-elect Donald Trump’s promise to impose sweeping tariffs on imports of Chinese goods.

During his presidential campaign, Trump vowed to enact a 45% tax on all Chinese products. Though political and economic realities will undoubtedly keep him from fully fulfilling that pledge, even targeted tariffs on specific goods could do real damage to China’s economy.

For instance, a tax on Chinese steel exports to the United States, which account for roughly one-tenth of China’s total steel and steel products exports, could leave Beijing with little choice but to backpedal on its cutbacks on home purchases and domestic spending in an effort to bolster its building materials sector.

At the very least, it would also put a crimp in China’s enduring struggle to overhaul and consolidate inefficient businesses in heavy industries such as coal and steel. Though Chinese President Xi Jinping has made a clear commitment to moving away from the country’s current model of using investment to fuel growth, that commitment depends in part on economic stability in the rest of the world.

With or without punitive U.S. trade measures, 2017 is gearing up to be a difficult year for China. Though the Chinese economy’s biggest challenges come from within, external developments — whether the policies of the next administration in Washington or an unforeseen crisis in Europe — may bring those internal problems to a head. And as the new year begins, China’s leaders will be on their guard as threats to the country’s social and economic stability mount.

John Minnich analyzes political, economic and security trends in East Asia. His areas of focus include political reform and development in China and Japan, China’s energy industry, and maritime tensions in the South and East China seas. He graduated from Cornell University and spent two years living in China, where he studied history and politics at Sichuan University in Chengdu. He holds a master’s in international relations from the University of Chicago and is fluent in Mandarin.