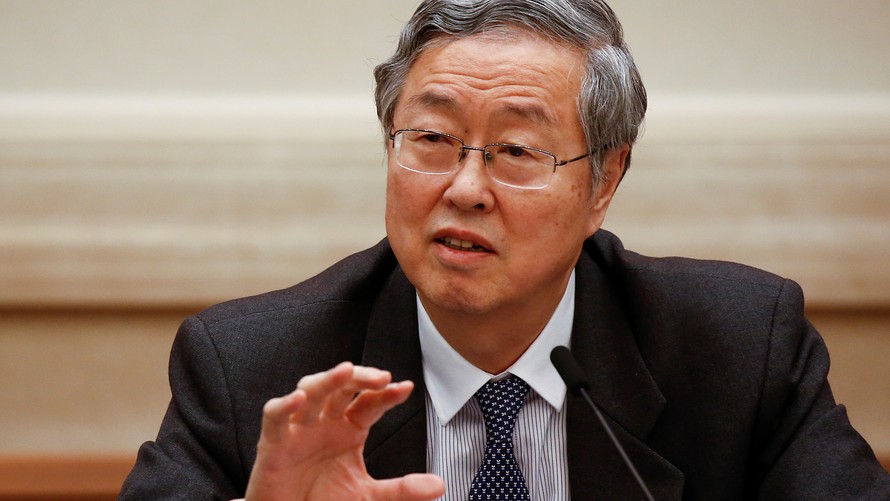 Reuters
China's central bank governor Zhou Xiaochuan speaks Thursday during a session on the second day of the 19th National Congress of the Communist Party of China in Beijing.

‘If there are too many pro-cyclical factors in the [Chinese] economy, cyclical fluctuations are magnified and there is excessive optimism during the period, accumulating contradictions that could lead to the so-called Minsky Moment.’

That’s a relatively more sober view of Chinese assets and Chinese growth prospects from a leading central bank official than the rosier remarks of late from government officials.

Zhou Xiaochuan made the comments on the sidelines of China’s 19th Communist Party congress Thursday, according to Reuters. Zhou also cautioned that corporate debt levels are relatively high and household debt is rising too quickly, according to the report.

A Minsky Moment is a sudden collapse of asset prices after a long period of growth, sparked by debt or currency pressures. The theory is named after economist Hyman Minsky.

“We should focus on preventing a dramatic adjustment,” he said. China will control risks from sudden adjustments to asset bubbles and will seriously deal with disguised debt of local government financing vehicles, Zhou said, according to Reuters.

Attention on China, as well weakness in tech earnings and geopolitical factors in Europe and the Middle East, combined to hit global stocks /zigman2/quotes/210598065/realtime DJIA -0.61%   Thursday.

Need to Know: As Dow clings to 23K, this broader benchmark is running into a roadblock

Zhou also said that the trading range of the yuan /zigman2/quotes/210561991/realtime/sampled USDCNY -0.0619%   exchange rate was not a key issue for the central bank currently, and that the width of the yuan’s band rarely constrains supply and demand, the news outlet reported.

Reuters also reported, citing unnamed sources, that Zhou, the longest-serving central bank official, is expected to step down from that post early next year. Zhou himself has talked about retirement “soon.”