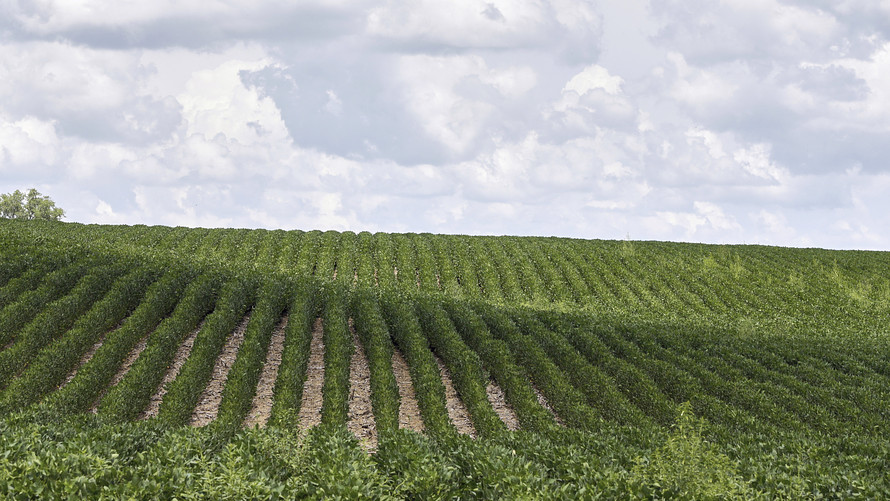 Associated Press
Rows of soybean plants in a field near Bennington, Neb. The way people use land is making global warming worse and making food more expensive, scarcer and even less nutritious, says a UN report.

Unchecked climate change and overuse of land are setting up a hunger crisis, a new United Nations scientific report warns, but there are steps that can put off the calamity.

With more extreme conditions — July was Earth’s hottest month ever and part of a four-year period at a record high — stable food production is increasingly at risk. That threatens the poorest populations first, but can ripple through the global economy, the Intergovernmental Panel on Climate Change said in its latest installment of a series of reports . The report comes as the UN prepares to meet at a climate-change summit in New York next month.

The report keeps up the pressure on policy makers, business executives and scientists to address the heat-trapping gases that are causing problems in the atmosphere, but makes an equal claim that land overuse is a worrisome, less-talked-about factor. The UN panel warns that a push to use more land to produce lumber, grow crops and feed livestock is eliminating natural wetlands and clearing forests that capture greenhouse gases.

Related: Rep. Bustos sees climate role for farmers, and business-minded scientist has no time for deniers

“Land plays an important role in the climate system,” said Jim Skea, a professor at Imperial College London and part of the UN panel’s working group.

“Agriculture, forestry and other types of land use account for 23% of human greenhouse gas emissions. At the same time natural land processes absorb carbon dioxide equivalent to almost a third of carbon dioxide emissions from fossil fuels and industry,” he said.

Read: Climate change has cost the government $350 billion — here’s what it will cost you

For consumers, their shopping list does matter. “Some dietary choices require more land and water, and cause more emissions of heat-trapping gases than others,” said Debra Roberts, co-chair of the IPCC working group.

The challenge also lies with food planning, production and better distribution. Currently 25%-30% of total food produced is lost or wasted, the report said. Fixing that would free up millions of square miles of land.

Findings also showed that the thinking on climate change does evolve.

Drawing criticism from global allies, President Trump in 2017 pulled the U.S. out of the Paris Climate Accord, saying at the time that developing and more recently developed nations, such as economic giant China, didn’t pull their weight when it came to climate policies. Some lawmakers at the time said the cost to the U.S. economy and poorer citizens from reducing fossil fuel use for heat and transportation  was worrisome.

The UN remains concerned with long-term costs. Better land management, in particular, it said, can have an impact.

“We don’t want a message of despair,” added Skea. “We want to get across the message that every action makes a difference.”