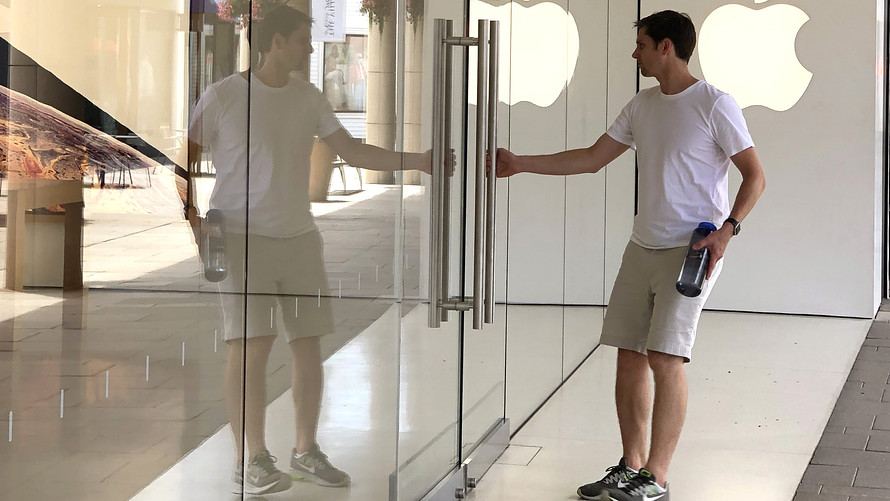 After Apple posted earnings that topped Wall Street expectations, the tech giant’s stock price has crested its April peak and is steadily closing in on a new 52-week high.

However, some investors are starting to get cold feet regarding Apple /zigman2/quotes/202934861/composite AAPL -1.44%  and talking about taking profits off the table — that is, presuming you have meaningful profits. Over the last 12 months, the stock is up a measly 3% even after this week’s run and has slightly underperformed the S&P 500 /zigman2/quotes/210599714/realtime SPX -1.51% return of about 6% in the same period.

It’s also worth noting that despite the earnings beat, Apple’s flagship iPhone segment posted a 12% sales decline compared with last year in the latest sign that the device has reached maturity. And bigger picture, underperforming tech stocks like Nvidia /zigman2/quotes/200467500/composite NVDA -4.52% and Google parent Alphabet /zigman2/quotes/205453964/composite GOOG -2.05%   /zigman2/quotes/202490156/composite GOOGL -2.18%   show that Big Tech is far from a sure thing right now; Alphabet is flat across the last 12 and once-surging Nvidia is down an ugly 30%.

But it would be a big mistake to give up on Apple here, or see this post-earnings pop as a fluke. Just because Apple isn’t posting the kind of jaw-dropping numbers we saw roughly a decade ago after the initial iPhone launch doesn’t mean this near-$1-trillion stock is no longer a powerhouse well worth holding on to, or perhaps even adding to your portfolio.

Here are seven reasons why:

Return to growth. After two straight quarters of declining sales, Apple turned things around with a return to growth. That proves that declining iPhone sales aren’t a death knell. The specifics included strong services revenue — a foundational arm of the business that offers utility-like reliability for revenue going forward — as well as big growth in wearables like the Apple Watch that show the company is still a powerful brand. As MarketWatch’s Jon Swartz recently pointed out, it’s the first time in almost seven years that Apple booked less than half its revenue from the iPhone. A more diversified business is categorically a good thing.

iPhone scale. While many folks focus on flatlining iPhone sales, it’s important to also talk about current scale instead of growth rates alone. Consider that in January, Apple said that there were 900 million iPhones in use. The company didn’t update that figure in its latest report, but did mention in its earnings call that device use hit a new all-time high. As Apple approaches 1 billion smartphones in operation worldwide, growth is less important than simply deploying its scale to good use — as proven by its services strength.

Beating forecasts. We can moralize about the pace of growth now vs. previous years of brisk expansion. But the bottom line is that Wall Street is an expectations game, and Apple topped forecasts on both the top and the bottom line. Even better is that Apple’s guidance also beat analyst expectations. That should provide confidence, too.

China progress. Bears on Apple have long lamented its struggles in China, but the company posted significant improvement in Greater China sales as it turned around a 22% decline in revenue in its previous report to a decline of just 4% for the June quarter. CEO Tim Cook said on the earnings call that when you exclude Taiwan and Hong Kong and just focus on mainland China sales, Apple actually returned to growth.

Tons of cash. While the nearly $1 trillion market capitalization is a thing to behold, the real example of Apple’s size comes in the form of cold, hard cash. Apple boasts over $210 billion in cash and investments, making it one of the best capitalized enterprises on the planet. Last year, it topped $77 billion in net operating cash flow. These are almost ridiculous numbers that provide an incredible backbone for the basic value of Apple’s stock.

Share repurchases. One of the things Apple has been doing with that cash is sucking up outstanding shares. In its most recent report, diluted shares stood at 4.57 billion. That’s down almost 9% from 5.0 billion a year ago. Longer term, the figure is down almost 30% from 6.52 billion shares at the end of 2013. Simply by eliminating supply, Apple has ensured strong demand for its stock among investors. And with a massive $75 billion repurchase plan in place, you can be sure this trend will persist.

Valuation. When you compare Apple with other stocks, even those outside of the tech sector, it looks at worst fairly valued and at best seems to be a substantial bargain. Apple boasts a forward price-to-earnings ratio of less than 17 at present, compared to a forward P/E of 18 for the S&P 500 at large and 22 for the tech-heavy Nasdaq /zigman2/quotes/210598365/realtime COMP -1.53% . And that’s including the copious cash on its balance sheet; subtract that from Apple’s market cap and value its profits alone, the company trades for just over 13 times forward earnings.

Jeff Reeves writes about investing for MarketWatch. He holds no investments in any companies mentioned in this article.

Jeff Reeves is a stock analyst who has been writing for MarketWatch since 2010.