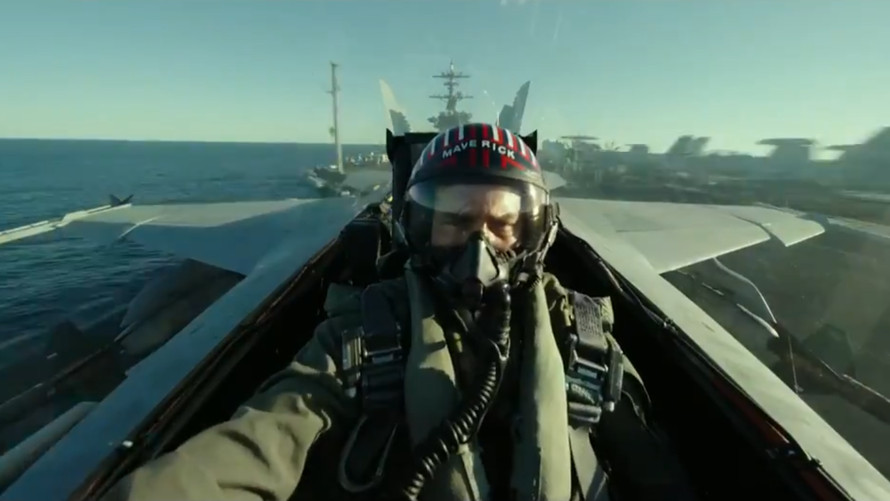 Paramount Pictures via YouTube
Tom Cruise is back in the sequel "Top Gun: Maverick."

There’s a reason why that co-worker who sits next to you has been quietly singing “Danger Zone” all day, while the one who sits on the other side has been singing “Memory.”

Tom Cruise surprised attendees at San Diego Comic-Con on Thursday by unveiling the first trailer for “Top Gun: Maverick,” the long-awaited sequel to the 1986 blockbuster. In it, Cruise reprises his role as an ace fighter pilot, only 34 years older, and now taking the son of his deceased buddy Goose under his wing. Expect lots of aerial stunts — all real, Cruise said — and familiar moments, as some scenes look like shot-by-shot remakes of the original. The movie, from Viacom Inc.’s   Paramount Pictures, will hit theaters in June 2020.

While it might not exactly be Oscar-bait, film critic Christopher Campbell perhaps summed up the trailer best: “Top Gun Maverick looks exactly as I presumed, nothing but an excuse for Tom Cruise to be able to fly the jets for real and prove it with cockpit cams. I’m cool with that.”

Social-media reaction appeared to range from “yeah!” to “hell yeah!” and the trailer even drew a reaction from tech columnist Kara Swisher, who tweeted: “I am verklempt.”

The internet was also going nuts late Thursday over the first trailer for “Cats,” the star-studded, live-action version of the Broadway smash hit musical, which debuted in 1980. Starring Idris Elba, Taylor Swift, Judi Dench and many more, the movie from Comcast Corp.’s (NAS:CMCSA)   Universal will be released in December.

A number of folks on social media remarked on the uncanny and creepy-looking visual effects, and reaction seemed decidedly mixed, with fans cheering and non-fans puzzled and horrified , yet oddly fascinated. Either way, it had everybody talking.

“If the internet doesn’t survive today, it makes total sense that it was cats that finally killed it," screenwriter Gary Whitta tweeted.

Also released at Comic-Con on Thursday were the first trailers for the Stephen King horror sequel “It: Chapter Two,” from AT&T’s (NYS:T)   Warner Bros., and Kevin Smith’s return to the “Clerks”-iverse with the indie comedy “Jay and Silent Bob Reboot.” Both are due in theaters later this year.

Comic-Con has become basically the Super Bowl of pop culture, offering first peeks at the most buzz-worthy upcoming movies and TV shows. Walt Disney Co.’s (NYS:DIS)   Marvel Studios and HBO’s “Game of Thrones” have taken center stage in recent years, and both franchises will make appearances this year as well. The convention runs through Sunday, so expect more sneak peeks of coming attractions to drop in the next few days.

Fans also got a first look Thursday at Paramount’s “Terminator: Dark Fate,” the latest installment in the franchise that started in 1984 (yes, Arnold Schwarzenegger is baaack, along with Linda Hamilton, and joined by Mackenzie Davis), which will be released in November. HBO also teased what it hopes can be a sprawling new fantasy series on par with “Game of Thrones” with its adaptation of “His Dark Materials,” starring Lin-Manuel Miranda, James McAvoy and Ruth Wilson, coming this fall.