Companies like Uber are getting into the helicopter business — are the skies ready? 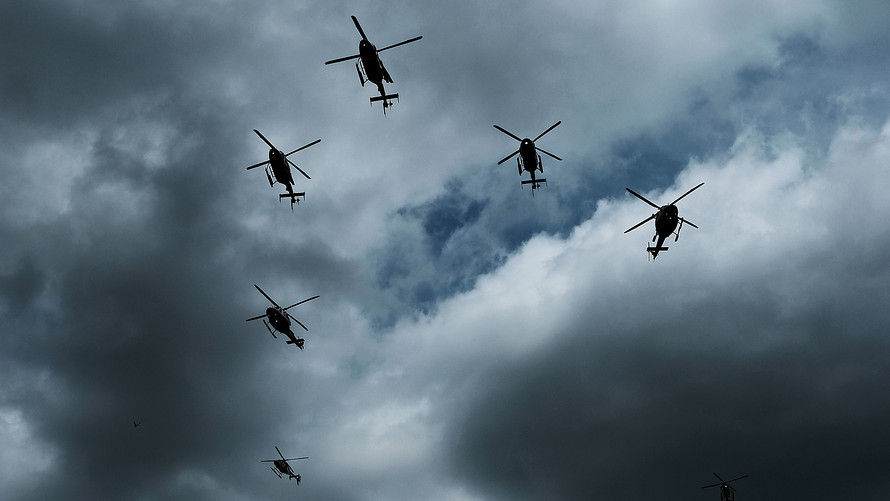 More helicopters could be flying over major cities in the years to come as air taxi services become more popular.

But a helicopter crash in Manhattan this week has some lawmakers wondering whether commuter helicopters should be banned from the airspace above places like New York City altogether.

A helicopter crashed onto the roof a 54-story office building in Midtown Manhattan on Monday, killing the pilot and forcing hundreds of people to evacuate the skyscraper. This was the second in the last month and follows other deadly crashes in the New York City area in recent years.

Monday’s crash comes as helicopter-based taxi services have grown in popularity. Earlier this month, Uber /zigman2/quotes/211348248/composite UBER +2.17%  announced that it will start offering a helicopter service, Uber Copter, in New York City beginning in July. The service, which will be operated by helicopter charter firm HeliFlite, will shuttle people from Lower Manhattan to John F. Kennedy International Airport during afternoon rush hour for between $200 and $225 per person, the company said.

Meanwhile, Blade, an app that allows users to crowdsource helicopter flights or buy seats on existing flights, has expanded operations to Southern California and the San Francisco Bay Area since launching in New York back in 2014. (Blade declined to comment.)

But this week’s crash has raised new questions about safety. Rep. Carolyn Maloney, a Democrat whose district includes parts of the Manhattan, Brooklyn and Queens boroughs of New York, said the Federal Aviation Administration should “ban unnecessary helicopters from the skies over our densely packed urban city.”

And politicians may have good reason to question the safety of helicopter services, said Ronald Goldman, a lawyer who specializes in aviation-related cases. “The issue of crowded skies and overburdened air control systems are all of significant concern,” he said.

Over the past 10 years, there have been more than 1,300 crashes or accidents involving helicopters, which have caused more than 380 fatalities, according to a MarketWatch analysis of data from the National Transportation Safety Board.

Comparatively, in 2017 alone, more than 37,000 people died in highway accidents in the U.S. Even when factoring in the fact that people far more frequently travel by car or truck than by helicopter, people are vastly more likely to die in a car accident than in a helicopter crash.

But these top-level figures mask the risk passengers may face when riding in a helicopter, Goldman said, whether for a sightseeing tour or as a commuting option.

The crash on Monday involved a pilot who was operating a helicopter in accordance with Part 91 of Federal Aviation Regulation. Pilots in these case are allowed to fly paid passengers but cannot operate their aircraft on an on-demand basis. This regulation also covers personal pilots.

‘We have far too many medical helicopter and tour operator crashes.’

Part 91 has less stringent requirements for pilots in terms of training and under what conditions they can fly. The vast majority of helicopter-related fatalities in the last decade (246 deaths) involved aircraft operating under Part 91.

However, nearly one-fifth of the deaths caused by helicopter accidents were associated with an aircraft operating under Part 135 of Federal Aviation Regulation, which applies to companies operating tours, air taxi services, and medical transport. Pilots who operate these planes are required to go through more training and must follow stricter guidelines about how to operate aircraft.

“We have far too many medical helicopter and tour operator crashes,” Goldman said. “When you look at it in segments, the picture looks different.”

Federal investigators are still working to determine what caused Monday’s crash. Inclement, foggy weather and the pilot’s training appear to have played a role.

The circumstances of the crash point to the need for improved regulation of helicopter activity, Goldman said, particularly as companies like Uber get into the helicopter business.

After a fatal crash in 1977, New York City banned helipads on the tops of buildings .

But New York only has three heliports as is, which means that pilots have few options for safe places to land when they encounter trouble in the skies over the city. In many cases, pilots have attempted to land on the water in these instance, sometimes with fatal consequences.

Goldman argues more helipads need to be built in cities like New York if helicopter services are going to become more common. “They’re going to have mechanical trouble, and they’re going to need a place to land,” he said.

Additionally, Goldman argued that air-traffic control systems are not well equipped to handle the potential surge in activity thanks to Uber-like services, Goldman said.

Complicating matters, private pilots, such as the one who died in Monday’s crash, don’t receive the same training as those who fly for tour or air taxi companies. The FAA has said that the pilot involved in Monday’s crash, Timothy McCormack, was not certified to fly in the weather conditions that were in place that day, according to NBC News . Yet, he did so anyway.

In New York, which has become the epicenter for newer commuter services, restrictions on helicopter activity are already in place. The industry reached an agreement in 2016 with city officials to cut the number of helicopter flights annually in half to 30,000. And aircraft that fly from the city’s heliports are restricted to flying over water under the deal — though helicopters from New Jersey can fly over Manhattan because the air space is officially controlled by the federal government.

The city has also banned open-door helicopter flights , following a crash of a helicopter during sight-seeing tour.

‘A majority of aviation accidents are human error.’

When considering the future of air travel, including the possibility of automated helicopter-like air taxis, regulators have emphasized the need to balance safety with innovation.

“The FAA can no longer just say no to a new entrant,” FAA acting administrator Daniel Elwell said during a speech this week , referring to autonomous helicopters that Uber and other companies are developing as a future form of transportation in urban areas. “For new entrants, we started with our legacy regulatory framework but have evolved to an “operations first” approach where we use existing rules where we can, and derive new rules where we need. As usual, safety is the primary concern.”

Moreover, industry insiders suggest that training, and not regulation, is what’s needed to improve safety.

“It’s not the helicopters or commuting services that cause accidents,” said Rick Kaiser, president of Rotor World, an aviation consulting and safety training firm. “A majority of aviation accidents are human error. Safety is the most important aspect of the industry and the only way to have a perfect safety record is training.”