Commentary: European decision is huge blow for NYSE and Nasdaq

NEW YORK (MarketWatch) — Since the pay scandal at the New York Stock Exchange more than five years ago, there has been one clear-cut strategy for all exchanges, not just the Big Board: if it moves, buy it.

And though hubris and envy had their place, the reason the NYSE turned into NYSE Euronext NYX 0.00%  and the Nasdaq Stock Market became Nasdaq OMX Group /zigman2/quotes/205547889/lastsale NDAQ -0.52%  was due more to simple economics. New trading laws intended to get customers the cheapest, quickest trade had made floors and trading platforms irrelevant. Read full story on E.U.’s decision to block merger .

Trading turned into a commodity, and the only way to capture profit was to capture listings and do a high volume trading business.

That was, of course, until Wednesday when the European Commission decided enough was enough. The combination of the NYSE and Deutsche Boerse /zigman2/quotes/203431168/delayed DBOEY +1.48%   /zigman2/quotes/205502669/delayed DE:DB1 +1.44%  would obviously create near-monopoly power in the trading of derivatives in Europe.

Don’t be surprised. The European Commission’s decision was foreshadowed by U.S. regulators last year when they objected to a tie-up of the two main players, the NYSE and Nasdaq. That decision, made in a unusually blunt statement, was a warning shot that said consolidation was on the verge of the saturation point. Exchanges were bumping up against the ceiling of what was acceptable market share. 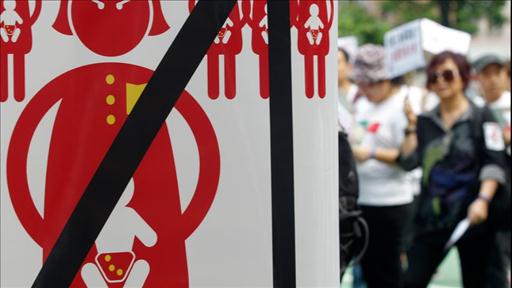 The very public slinging of insults continues between a group of Hong Kongers and mainland Chinese. As the WSJ's Jason Chow tells Deborah Kan, this time the fight involves a newspaper and a locust.

But if global regulators have drawn the line, what’s next for the exchanges? Those same regulators have culled profitability from trading by making the distinction of where a trade is executed meaningless.

And if those exchanges can only fight for new profits through listing fees, those profits too will shrink as the exchange competition for Facebook’s listing shows.

In some ways, the exchange industry has hit a crossroads, but it’s more than that. Both streets look like dead ends.