Consumer sentiment index tumbles to 71 in April from 89.1 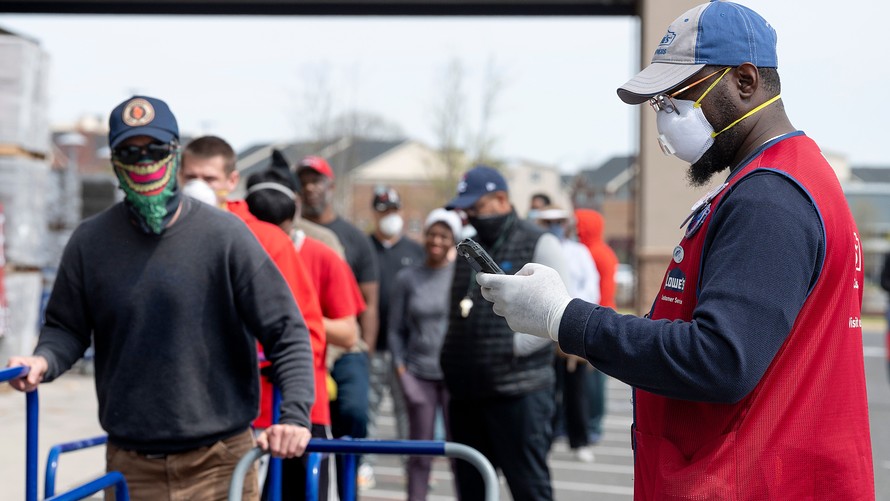 Getty Images
A Lowes employee counts shoppers and limits the number inside as others wait in line to get into Lowes Home and Garden Center in Washington, DC, The coronavirus caused consumer confidence to sink to X lows.

The numbers: Millions of coronavirus-related job losses and the shutdown of large parts of the U.S. economy have battered consumers and dragged confidence down to a nine-year low, a new survey shows.

The preliminary reading of the consumer sentiment survey sank to 71 in early April from 89.1, marking the biggest-ever one-month decline and putting the index at lowest level since 2011, the University of Michigan said Thursday . 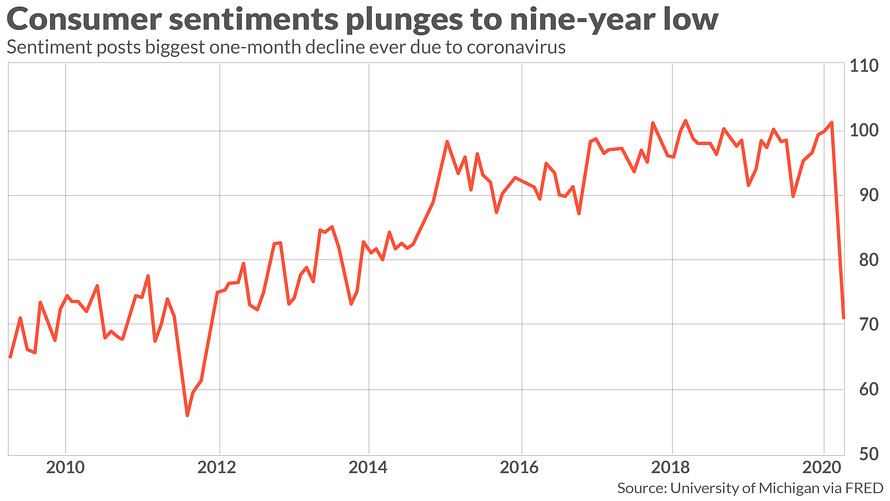 Almost overnight consumers have turned from being optimistic to deeply pessimistic. The rapid spread of COVID-19 has not only destroyed lives, it’s arguably delivered the deepest blow to the U.S. economy since the Great Depression nearly a century ago.

If the crisis drags on for months, the sentiment survey might very well fall below its previous record low of 55.3 in 2008 during the middle of the last recession, one of the worst in modern U.S. history.

Read: Being furloughed beats layoffs: What it means for millions of now jobless workers

What happened: Just two month ago consumer sentiment stood close to a 15-year high, but the coronavirus and attempts to curtail its spread has upended the U.S. and world economies.

A portion of the sentiment survey that examines how Americans view the present plunged to 72.4 from 103.7

Another part of the survey that gauges attitudes for the next six months slipped to 70 from 79.7.

Big picture: The U.S. economy has already begun a sharp contraction and it’s entering the first recession in 11 years. More than 16 million Americans were either furloughed or laid off in the past month, driving the unemployment rate above 10%, economists say.

Barring a sudden cure for the virus, it could take the U.S. economy a long time to return to precrisis levels.

What they are saying? “Anticipating a quick and sustained economic expansion is likely to be a failed expectation, resulting in a renewed and deeper slump in confidence,” said Richard Curtin, chief economist of the survey.

“Consumers need to be prepared for a longer and deeper recession rather than the now discredited message that pent-up demand will spark a quick, robust, and sustained economic recovery,” he added.

Market reaction: The Dow Jones Industrial Average /zigman2/quotes/210598065/realtime DJIA +0.91% and S&P 500 /zigman2/quotes/210599714/realtime SPX +0.46% rose in Thursday trades after the Federal Reserve unveiled a $2.3 trillion loan program to help businesses survive the pandemic. The steep decline in the sentiment survey was widely expected and unlikely to sway investors much.