Many seafood dishes sold in grocery stores and restaurants are not what they appear to be, according to a new report 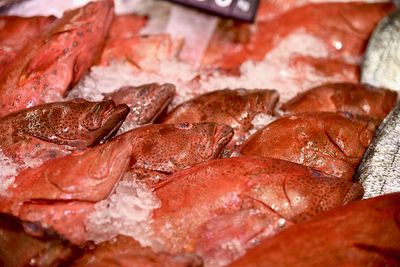 Getty Images / iStock photo
Red Snapper, one of the most commonly mislabeled fish.

Some players in the seafood industry are pulling a bait-and-switch.

Consumers may not be getting the lobster, sea bass, or snapper they think they paid for, a new study from conservation group Oceana concluded.

The study examined 449 samples of seafood from grocery stores, markets and restaurants in 24 different states and the District of Columbia. Scientists found that 1 in 5 of the fish tested (21%) were mislabeled on the packaging at supermarkets or on restaurant menus. And among the fish tested, seafood was more likely to be mislabeled at restaurants and small markets.

Fish researchers used DNA tests to see if the catch they bought was actually what it said it was on its label or menu description. The products they found to be mislabeled included: hogfish, slipper lobster, sea bass, Alaskan halibut, Dover sole, redfish, black drum and Florida snapper. One out of three stores and restaurants in the survey sold at least one mislabeled fish.

The two most misclassified types of seafood were sea bass, which was mislabeled 55% of the time, and snapper, which was mislabeled 42%, according to the report. Researchers who thought they bought sea bass got giant perch or Nile tilapia; and the fish labeled Florida snapper was actually lavender jobfish.

The National Fisheries Institute, a non-profit organization focused on seafood safety, sustainability and nutrition, said it works with retail and restaurants to shed light on the issue of alleged fish fraud. “The BSB [Better Seafood Board] and its members are actively confronting fish fraud at every level of the value chain and call on regulators to do the same,” Gavin Gibbons, a spokesperson at National Fisheries Institute told MarketWatch in an email. “Policies designed to stop fish fraud already exist, authorities need the willingness and the resources to act on them.”

Researchers also claimed that some imported seafood was sold as regional favorites, tricking consumers into thinking their fish was locally sourced. In some instances, for example, Florida Snapper was advertised, but consumers were really getting lavender jobfish.

‘We want better checks and balances on our seafood and information on where and how it’s caught to follow that fish route’s journey to the time it ends up on our dinner plate.’

“We want better checks and balances on our seafood and information on where and how it’s caught to follow that fish route’s journey to the time it ends up on our dinner plate,” Warner said.

The federal government mandated the Seafood Import Monitoring Program in 2018 , which requires traceability from where the fish was caught for just 13 types of imported seafood considered to be most at risk for mislabeling. The list includes: Atlantic cod, grouper, swordfish, tunas, king crab, mahi mahi, sharks and sea cucumber.

“Say you’re a pregnant woman who has been told to avoid high mercury in fish. Tile fish from the Gulf of Mexico is a concern,” Warner says. “There are fish that come into this country that aren’t being screened.”

The Oceana report is the latest example of alleged fish fraud. An investigation by the New York state Attorney General’s Office last year found that more than one in four samples of seafood they purchased and tested was wrongly labeled . Consumers who bought “wild” caught fish likely got farm-raised substitutes.