Coronavirus deaths take a long-expected turn for the worse in U.S

The seven-day rolling average for daily reported deaths in the U.S. has increased from 578 two weeks ago to 664 on July 10 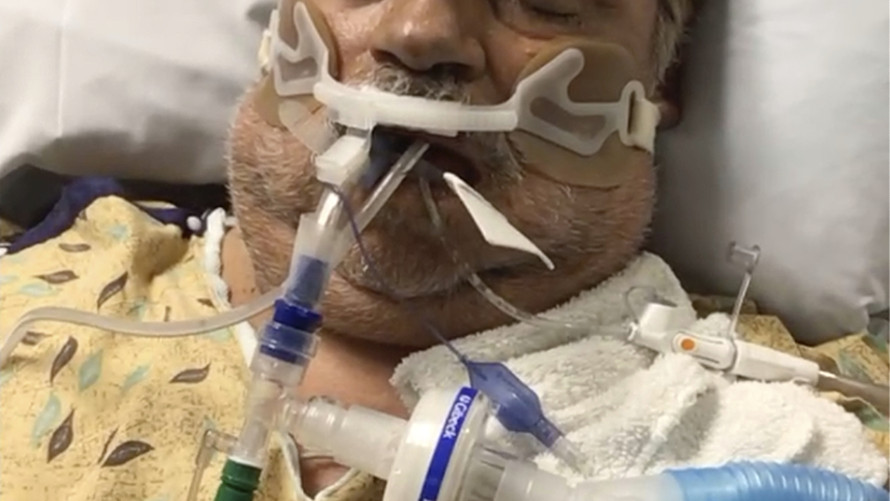 AP
In this June 2020 image provided by the family, Kristin Urquiza makes a video call with her father, Mark, lying in a hospital bed in Phoenix. Gov. Doug Ducey ended Arizona’s stay-at-home order on May 15, eased restrictions on businesses, and initially blocked local lawmakers from requiring residents to wear masks. By June 11, the elder Urquiza had developed a fever and cough. He was hospitalized and eventually placed on a ventilator. He died June 30.

A long-expected upturn in U.S. coronavirus deaths has begun, driven by fatalities in states in the South and West, according to data on the pandemic.

The number of deaths per day from the virus had been falling for months, and even remained down as states like Florida and Texas saw explosions in cases and hospitalizations — and reported daily U.S. infections broke records several times in recent days.

Scientists warned it wouldn’t last. A coronavirus death, when it occurs, typically comes several weeks after a person is first infected. And experts predicted states that saw increases in cases and hospitalizations would, at some point, see deaths rise too. Now that’s happening.

“It’s consistently picking up. And it’s picking up at the time you’d expect it to,” said William Hanage, a Harvard University infectious diseases researcher.

According to an Associated Press analysis of data from Johns Hopkins University, the seven-day rolling average for daily reported deaths in the U.S. has increased from 578 two weeks ago to 664 on July 10 — still well below the heights hit in April. Daily reported deaths increased in 27 states over that time period, but the majority of those states are averaging under 15 new deaths per day. A smaller group of states has been driving the nationwide increase in deaths.

California is averaging 91 reported deaths per day while Texas is close behind with 66, but Florida, Arizona, Illinois, New Jersey and South Carolina also saw sizable rises. New Jersey’s recent jump is thought to be partially attributable to its less frequent reporting of probable deaths.

The impact has already been felt by families who lost kin — and by the health care workers who tried to save them.

Rublas Ruiz, a Miami intensive care unit nurse, recently broke down in tears during a birthday dinner with his wife and daughter. He said he was overcome by the number of patients who have died in his care.

“I counted like 10 patients in less than four days in our ICU and then I stopped doing that because there were so many,” said the 41-year-old nurse at Kendall Regional Medical Center who lost another patient Monday.

The virus has killed more than 130,000 people in the U.S. and more than a half-million worldwide, according to Johns Hopkins University, though the true numbers are believed to be higher.

Deaths first began mounting in the U.S. in March. About two dozen deaths were being reported daily in the middle of that month. By late in the month, hundreds were being reported each day, and in April thousands. Most happened in New York, New Jersey and elsewhere in the Northeast.

Deaths were so high there because it was a new virus tearing through a densely populated area, and it quickly swept through vulnerable groups of people in nursing homes and other places, said Perry Halkitis, the dean of the Rutgers University School of Public Health in New Jersey.

Many of the infections occurred before government officials imposed stay-at-home orders and other social-distancing measures. The daily death toll started falling in mid-April — and continued to fall until about a week ago.

Researchers now expect deaths to rise for at least some weeks, but some think the count probably will not go up as dramatically as it did in the spring — for several reasons.

First, testing was extremely limited early in the pandemic, and it’s become clear that unrecognized infections were spreading on subways, in nursing homes and in other public places before anyone knew exactly what was going on. Now testing is more widespread, and the magnitude of outbreaks is becoming better understood.

Second, many people’s health behaviors have changed, with mask-wearing becoming more common in some places. Although there is no vaccine yet, hospitals are also getting better at treating patients.

Another factor, tragically, is that deadly new viruses often tear through vulnerable populations first, such as the elderly and people already weakened by other health conditions. That means that, in the Northeast at least, “many of the vulnerable people have already died,” Halkitis said.

Now, the U.S. is likely in for “a much longer, slower burn,” Hanage, the Harvard researcher, said. “We’re not going to see as many deaths (as in the spring). But we’re going to see a total number of deaths, which is going to be large.”

In other virus-related developments:

— Walt Disney World’s Magic Kingdom and Animal Kingdom are reopening Saturday; Epcot and Disney’s Hollywood Studios will follow four days later. The move comes as there has been a surge in the number of Floridians testing positive for the coronavirus and the state set a record of nearly 500 confirmed deaths in a week.

— The number of New Yorkers hospitalized with the coronavirus — 799 — has fallen to the lowest point since March 18. But Gov. Andrew Cuomo fears a resurgence in cases is inevitable amid outbreaks in other states.