Coronavirus pandemic is not keeping Swedes at home 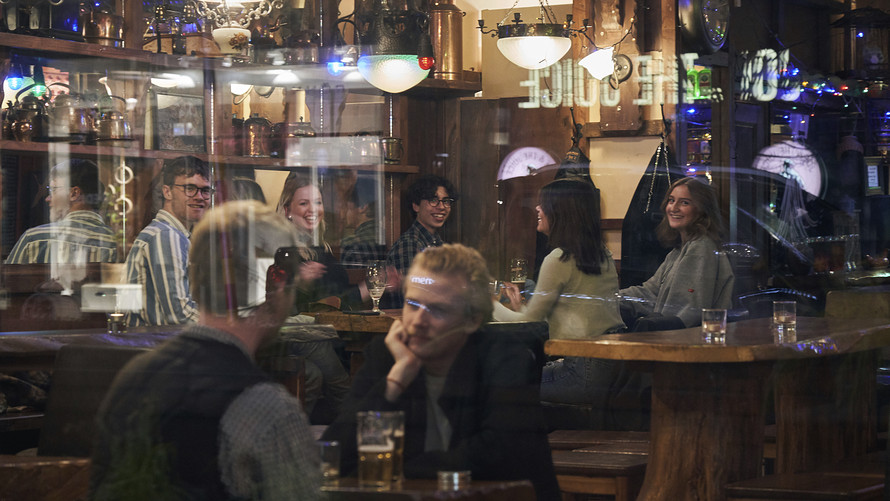 Associated Press
People congregate at a bar in Stockholm last week. Standing at bars has been banned in Sweden, but restaurant customers can still be served, as long as they are seated at tables.

STOCKHOLM (AP) — The streets of Stockholm are quiet but not deserted. People still sit at outdoor cafés in the center of Sweden’s capital. Vendors still sell flowers. Teenagers still chat in groups in parks. Some still greet each other with hugs and handshakes.

After a long, dark Scandinavian winter, the coronavirus pandemic is not keeping Swedes at home even while citizens in many parts of the world are sheltering in place and won’t find shops or restaurants open on the few occasions they are permitted to venture out.

Swedish authorities have advised the public to practice social distancing and to work from home, if possible, and urged those over age 70 to self-isolate as a precaution. Yet compared with the lockdowns imposed elsewhere in the world, the government’s response to the virus allows a liberal amount of personal freedom.

Standing at bars has been banned in Sweden, but restaurant customers can still be served at tables instead of having to take food to go. High schools and universities are closed, but preschools and primary schools are still running classes in person.

“Sweden is an outlier on the European scene, at least,” said Johan Giesecke, the country’s former chief epidemiologist and now adviser to the Swedish Health Agency, a government body. “And I think that’s good.”

Related: Sweden is forging its own pandemic path with most of the Western world under stay-at-home orders

Other European nations “have taken political, unconsidered actions” instead of ones dictated by science, Giesecke asserted.

It remains unclear how long Sweden’s exceptional state will last.

Prime Minister Stefan Lofven, warning of “many tough weeks and months ahead,” announced Friday that as of Sunday, gatherings would be limited to 50 people instead of 500. The government noted that weddings, funerals and Easter celebrations would be affected.

Still, to reduce the spread of the virus in Germany and the U.K., groups larger than two are currently prohibited unless they are composed of people who already live together. Officials in Italy and France introduced increasingly restrictive limits on public activities and eventually authorized fines because they said too many people ignored social distancing recommendations.

For now, the Swedish government maintains that citizens can be trusted to exercise responsibility for the greater good and will stay home if they experience any COVID-19 symptoms. Many Swedes are indeed keeping the recommended distance from others.

“And it’s partly because I don’t think I could manage being inside the whole day,” Holmgren said.

But some scientists have criticized the Swedish Public Health Agency’s approach as irresponsible during a worldwide pandemic that has already killed over 21,000 people in Europe. In an open letter to the government, some 2,000 academics called for greater transparency and more justification for its infection prevention strategy.

Sten Linnarsson, a professor at Karolinska Institute, a prominent medical university in Sweden, said the concern centers on “the assessments and the course that the Swedish government has taken through this epidemic, and especially because there is really a lack of scientific evidence being put forward for these policies.”

Linnarsson compared Sweden’s handling of the virus to letting a kitchen fire burn with the intent of extinguishing it later.

“That doesn’t make any sense. And the danger, of course, is that it burns the whole house down,” he said.

Sweden’s current chief epidemiologist, Anders Tegnell, argued that even if the country’s comparatively permissive policies are an anomaly, they are more sustainable and effective in protecting the public’s health than “drastic” moves like closing schools for four or five months.

Sweden, a nation of 10 million, had a total of 4,947 confirmed coronavirus cases and 282 deaths as of Thursday afternoon, according to a Johns Hopkins University tally. As elsewhere, notably in the United States, testing has been sufficiently scarce to cast some measure of doubt on the count’s accuracy.

“The goal is to slow down the amount of new people getting infected so that health care gets a reasonable chance to take care of them. And that’s what we all do in every country in Europe,” Tegnell said. “We just choose different methods to do it.”

Susanna Moberg, a 63-year-old retired teacher, said she trusted the government and also believes Sweden’s experience with the virus will not be as dire as Italy’s, which has by far the most virus-related deaths in the world at 13,915 as of late Thursday.

“I’m not so worried. I’m not 70 years yet. And my children are not sick so we will go to a restaurant on Sunday,” Moberg said. “We said, ‘Everybody is well, and the restaurant is open.’ So we will go there to celebrate. We can’t stay at home the whole day, all week.”