Inspectors in Wuhan go door-to-door to find those infected 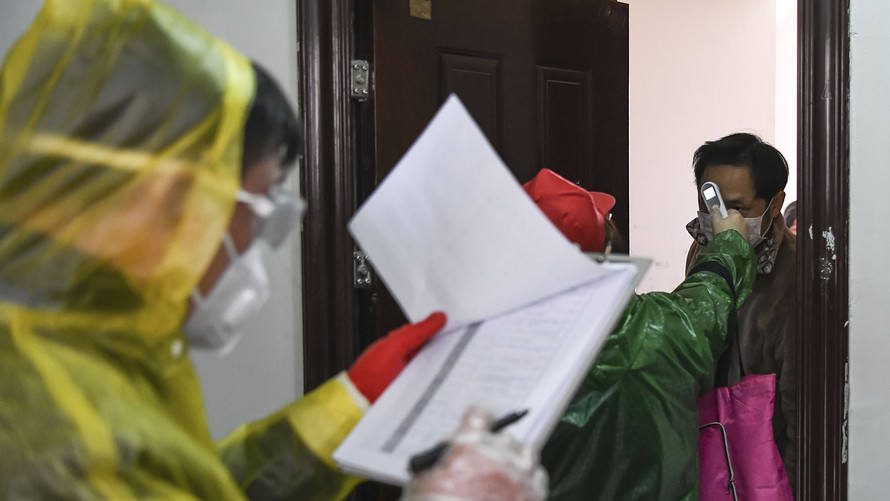 Xinhua via AP
Workers go door to door to check the temperature of residents during a health screening campaign in Wuhan, China.

BEIJING — New virus cases in China rose by just 394 from the previous day, with a rise in the death toll of 114, the government said Thursday, as health inspectors went door-to-door to find every infected person in the worst-hit city.

Mainland China has now reported 2,118 deaths and 74,576 total cases. While the overall spread of the virus has been slowing, the situation remains severe in Hubei province and its capital, Wuhan, where the new coronavirus was first detected in December. More than 80% of the country’s cases are in Hubei and 95% of the deaths, according to data from China’s National Health Commission.

The new daily figure is a notable drop from the 1,749 cases recorded the previous day.

Cities in Hubei with a combined population of more than 60 million have been under lockdown since the Lunar New Year holiday last month, usually China’s busiest travel period. Authorities halted nearly all transportation and movement except for quarantine efforts, medical care, and delivery of food and basic necessities. “Wartime” measures were implemented in some places, with residents prevented from leaving their apartments.

The stringent measures have followed public fury over Hubei authorities’ handling of the outbreak when it began in December. The risk of human-to-human transmission was downplayed, and doctors who tried to warn the public were reprimanded by police. Wuhan residents reported overcrowding in hospitals and futile attempts to seek treatment.

Many countries have also set up border screenings and airlines have canceled flights to and from China to prevent further spread of the disease, which has been detected in around two dozen countries and caused more than 1,000 confirmed cases outside mainland China. Six deaths have been confirmed outside the mainland — two in Hong Kong and one each in Taiwan, Japan, the Philippines and France.

Chinese scientists reported some troubling findings about how the virus spreads. Swabs were taken on 14 people who returned to Guangdong province in January after visiting Wuhan and developing the disease. High amounts of the virus were detected soon after symptoms started, more in the nose than in the throat, and the virus was also found in one of their close contacts who never showed any symptoms.

That adds to concern about potential spread of the virus by people who may not know they’re infected. The report from the Guangdong Provincial Center for Disease Control and Prevention was published by the New England Journal of Medicine.

Two elderly passengers taken off the Diamond Princess cruise ship in Tokyo because they were infected with a new virus have died, Japan’s health ministry said Thursday, becoming the first fatalities from the virus-stricken vessel.

Japan now has three deaths linked to the COVID-19 illness.

Japan’s NHK public television said both were Japanese in their 80s. A health ministry official only confirmed that they had been previously been hospitalized in serious condition and had existing chronic diseases. The official spoke anonymously, citing office protocol.

About 500 passengers who tested negative for the virus departed the quarantined cruise ship Wednesday. Australia and Hong Kong also brought home their residents from the ship and put them in 14-day quarantines. The ship has 621 cases of the virus, the most outside China. Results were still pending for some other passengers and crew among the original 3,711 people on board.

Passengers from another cruise ship Westerdam have tested negative for the virus, according to Cambodia’s Health Ministry, but they are stuck on the ship or in Cambodia because they have limited travel options there and other countries are concerned they could carry the virus.

Seven hundred of the Westerdam’s passengers had already left Cambodia after the ship docked last week, only to have one woman test positive for the virus when she arrived in Malaysia.