The coronavirus outbreak is heating up fast in smaller cities in the heartland, often in conservative corners of America where anti-mask sentiment runs high 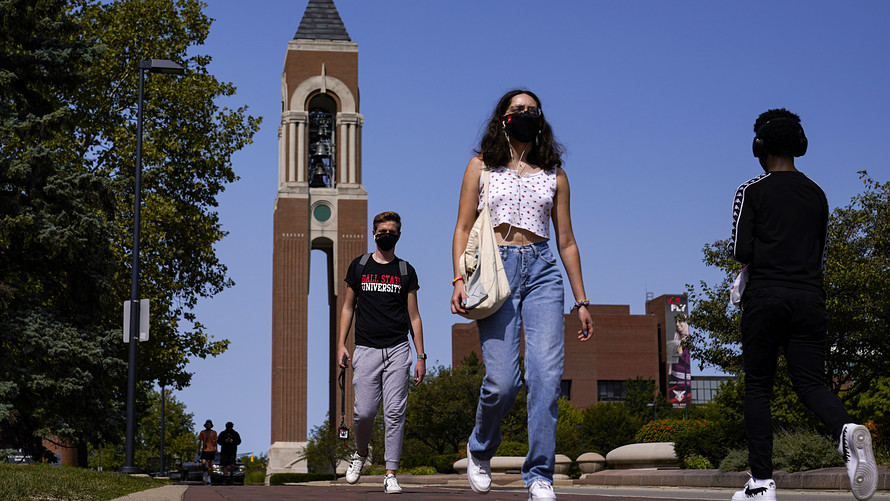 AP
Masked students walk through the campus of Ball State University in Muncie, Ind., Thursday, Sept. 10, 2020. Colleges across the U.S. are struggling to salvage the fall semester as campus coronavirus cases skyrocket and tensions with local health leaders flare. Schools have locked down dorms, imposed mask mandates, barred student fans from football games and toggled between online and in-person classes.

At least 864 new coronavirus deaths and 54,536 new cases were reported in the United States on Sept. 25. Over the past week, there have been an average of 42,803 cases per day, an increase of 22 percent from the average two weeks earlier.

As of Saturday morning, more than 7,059,200 people in the United States have been infected with the coronavirus and at least 203,500 have died, according to New York Times data .

Case numbers remain persistently high across much of the country, though reports of new cases have dropped considerably since late July, when the country averaged well over 60,000 per day.

States in the Northeast, where infections were highest this spring, have reported relatively low case numbers for months. Some places that suffered the most in early summer, including Arizona, Florida and California, have since seen steep declines. But some of that progress has been offset by rising case numbers on the Great Plains and in some Southern states.

Deaths, though still well below their peak spring levels, averaged around 850 per day in mid September, far more than were reported in early July.

It began with devastation in the New York City area, followed by a summertime crisis in the Sun Belt. Now the coronavirus outbreak is heating up fast in smaller cities in the heartland, often in conservative corners of America where anti-mask sentiment runs high.

The spike across the Midwest as well as parts of the West has set off alarms at hospitals, schools and colleges.

Colleges across the country are struggling to salvage the fall semester amid skyrocketing coronavirus cases, entire dorm complexes and frat houses under quarantine, and flaring tensions with local community leaders over the spread of the disease, the Associated Press reported .

Elsewhere around the country, Florida’s Republican governor lifted all restrictions on restaurants and other businesses Friday and all but set aside local mask ordinances in the political battleground state, in a move attacked by Democrats as hasty.

Wisconsin is averaging more than 2,000 new cases a day over the last week, compared with 675 three weeks earlier. Hospitalizations in the state are at their highest level since the outbreak took hold in the U.S. in March.

More than 1,000 New Yorkers tested positive for COVID-19 in a single day Friday, marking the first time since June 5 the state has seen a daily number that high.

The number of positive tests reported daily in the state has been steadily inching up in recent weeks, a trend possibly related to increasing numbers of businesses reopening, college campuses reopening and children returning to school. Gov. Andrew Cuomo announced Saturday there were 1,005 positive cases tallied on the previous day out of 99,953 tests, for a 1% positive rate.

From late July through the start of September the state was seeing an average of around 660 people test positive per day. In the seven-day period that ended Friday, the state had averaged 817 positive tests per day.

On the bright side, Novavax Inc. /zigman2/quotes/202614340/composite NVAX -7.88% announced a COVID-19 vaccine manufacturing deal with Endo International PLC /zigman2/quotes/207745412/composite ENDP -6.40% , in which an Endo subsidiary will provide fill-finish manufacturing services at a factory in Rochester, Mich. The product being produced is expected to be used in Novavax’s Phase 3 trials of NVX-CoV2373 in the U.S., as well as for potential general distribution to the public if the vaccine candidate receives regulatory approval or authorization.

Don’t miss : There are currently four coronavirus vaccines in late-stage studies; here’s how they differ.