Public must have regular updates on Trump’s health from his doctors, and not White House staff, says Dr. Ashish Jha 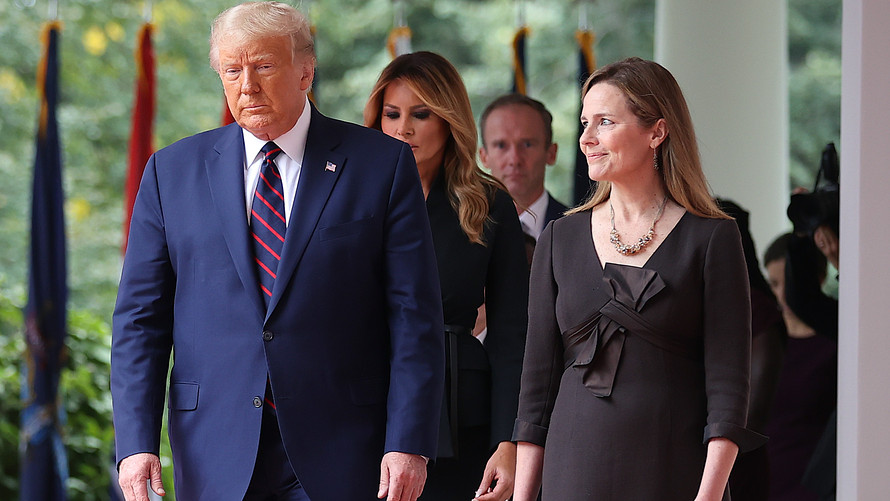 The number of confirmed U.S. cases of the coronavirus that causes COVID-19 rose to 7.4 million on Sunday, and now includes President Donald Trump and first lady Melania and at least eight others in their circle, with more people expected to test positive from a White House Rose Garden event last weekend and other gatherings over the past week.

Trump, who was admitted to the Walter Reed National Military Medical Center late Friday, has been given a dose of Regeneron Pharmaceuticals Inc.’s experimental neutralizing antibody cocktail, in addition to Gilead Sciences Inc.’s remdesivir.

“As the president undergoes treatment for his emerging symptoms, the public must receive daily, honest updates about the president’s condition, not from White House staff but from his medical team.”

During a roughly 10-minute news conference, Conley said that the president had received his first dose of dexamethasone on Saturday. Dexamethasone is a type of cortisteroid that researchers in the U.K. said in June can reduce deaths in severely ill COVID-19 patients who were on ventilators or oxygen support. The drug has yet to show any benefit in hospitalized patients not on respiratory support.

Conley also confirmed for the first time that Trump was briefly on supplemental oxygen Friday morning, noting that at that time he had a high fever and “his oxygen saturation was transiently dipping below 94%.”

Trump himself addressed the nation in a video statement from the hospital on Saturday, in which he said he was feeling better but that the next few days would be the real test.

Dr. Ashish Jha, dean of the Brown University School of Public Health, said it is reasonable to assume that Trump was infected between last Saturday, when he announced his Supreme Court candidate at the Rose Garden at an event at which he and many others were not wearing face masks, and Monday, and was infectious to others as early as Tuesday, when the first presidential debate was held in Cleveland.

Jha called for “radical transparency” on the course of the president’s illness. “As the president undergoes treatment for his emerging symptoms, the public must receive daily, honest updates about the president’s condition, not from White House staff but from his medical team,” Jha said in a statement.

He also said it is crucial that immediate and widespread testing be carried out of all who attended events with Trump over the last week to avoid further transmission of the virus.

“The public also needs to know how testing and tracing are being implemented and in what time frame, and if all relevant parties are quarantining,” he said. “In light of the upcoming election and a nation deeply polarized and increasingly losing trust in government, honest updates about the president’s condition and actions taken to control further spread and keep key leaders safe, will assure a basic level of trust in the government’s ability to respond effectively at this critical moment.

“Failing to be transparent will further erode the social contract. We need transparency at every level,” he wrote.

See now: Weekend reads: What to know now that President Trump has the coronavirus

On Friday, many lawmakers voiced hope that Trump’s positive diagnosis would change Americans’ view of the crisis and improve compliance with safety measures.

House Speaker Nancy Pelosi told MSNBC she hoped the news would bring a complete shift in the U.S. approach to managing the pandemic.

“Maybe now that people that see that the president of the United States, and all the protection he has, and the first lady, having this exposure, it might be a learning experience” she said. “And more than learning, it has to be something that is acted upon.”

Pelosi criticized Trump’s attitude to the illness as cavalier. “Going into crowds unmasked and all the rest was a sort of brazen invitation for something like this to happen” she said. “It’s sad that it did, but it’s nonetheless hopeful that it will be a saner transition to what this virus all about.”

Delaware Sen. Chris Coons, a Democrat who was in the audience for Tuesday’s presidential debate, echoed that sentiment: “This is a reminder that all of us are vulnerable to this dangerous virus and should follow public health guidelines about mask wearing, social distancing, and more,” Coons said in a statement, CNN reported.

Michigan Gov. Gretchen Whitmer, a Democrat, said she hoped the news would serve as a wake-up call to every single American.

“Here’s the good news. We can beat this enemy — but it’s going to take every single one of us working together to do it. Right now the most effective weapon we have is pretty simple: it’s wearing a mask that covers your nose and mouth. It’s washing your hands with soap and water. And maintaining six feet of physical distance from one another.”

See: President Trump tested positive for coronavirus — here’s everything we know so far

Read also: Trump tests positive for coronavirus, and the implications are wide-ranging

World leaders rushed to wish the president and first lady speedy recoveries, while markets initially tumbled as pundits weighed in on what this means for the election and the management of the pandemic. Dr. Tedros Adhanom Ghebreyesus, director-general of the World Health Organization, which Trump has attacked for its handling of the pandemic, sent his best wishes to the president and his wife.

See now: As Trump says he is positive for coronavirus, a look back at his shifting statements on face masks and the threat of COVID-19

The U.S. counted another at least 1,728 new cases on Saturday and at least five new deaths, according to a New York Times tracker. That’s after 53,428 new infections and at least 863 deaths on Friday. (Weekend counts are typically lower due to reduced staffing at medical centers.), In the past week, the daily count has averaged 1,230 cases a day, up from the average two weeks earlier.

The U.S. has lost 209,401 people to the virus, according to data aggregated by Johns Hopkins University , or about a fifth of the global toll of 1.03 million. Experts have for months lamented the U.S.’s failure to adopt the testing, contact tracing and isolation that have allowed some countries to contain the spread, and to persuade the public of the need to fully comply with the recommended safety measures.

Trump confided to journalist Bob Woodward that he has publicly downplayed the virus. Trump has insisted it would disappear, touted unproven and even harmful treatments, and derided Biden for wearing a face mask. That in turn has created mistrust among his supporters and led to protests against face masks in many states.

Coronavirus cases have climbed in 33 states and Puerto Rico since August, according to a Washington Post analysis. Now hospitalizations are on the rise again in at least a dozen states, including New Jersey, Delaware and Texas. Wisconsin has seen record high cases counts for 20 straight days as of Thursday, and added more than 17,000 cases in a single week, the analysis found.