Coronavirus update: Global case tally above 34 million — with U.S. accounting for a fifth — as Dr. Fauci hits back at Trump’s mask claim

White House has been encouraging states to enforce face-mask mandates, report says, even as Trump and Pence appear without them 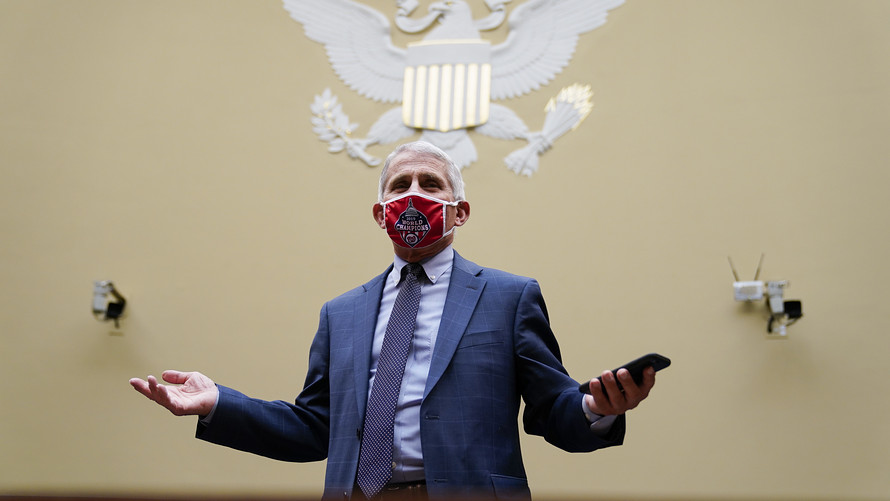 Getty Images
Dr. Anthony Fauci is the longtime director of the National Institute of Allergy and Infectious Diseases.

The number of confirmed cases of the coronavirus that causes COVID-19 worldwide rose above 34 million on Thursday, with the U.S. accounting for about a fifth of that total, as Dr. Anthony Fauci hit back at claims made by President Donald Trump during Tuesday’s presidential debate on face masks.

Trump said Fauci, who is head of the Institute for Allergies and Infectious Diseases, said “masks are not good — and then changed his mind.” In a podcast recorded for ABC News, Fauci rebutted that claim.

“Anybody who has been listening to me over the last several months knows that a conversation does not go by where I do not strongly recommend that people wear masks,” he said. The podcast will be available in full later Thursday, according to ABC.

Fauci reminded listeners that early on in the pandemic, he and other health experts recommended against face coverings out of concern there would be a shortage of medical-grade masks for frontline workers, but later changed that view once it was clear the virus was transmissible by asymptomatic patients.

“I have been on the airways, on the radio, on TV, begging people to wear masks,” said Fauci. “And I keep talking in the context of: Wear a mask, keep physical distance, avoid crowds, wash your hands, and do things more outdoors versus indoors.”

Experts are dismayed at how face masks have become politicized during the crisis, with Trump and Vice President Mike Pence frequently appearing in public without one, and holding political rallies where few in attendance wear them, either. Trump has taunted reporters and election rival Joe Biden for wearing them.

Yet at the same time the White House is quietly encouraging state governors to implement mask mandates and even to impose fines on those who refuse to wear them, according to a report in Kaiser Health News.

“At some point, we have to turn the corner on this ridiculous separation of what we’re being told is best practice and being guided by science and data, and what the actual practices are by the people who issue them,” Lori Tremmel Freeman, CEO of the National Association of County and City Health Officials, told Kaiser Health News.

Trump is planning to hold rallies in Wisconsin this weekend, even as the task force has called for increasing social distancing “to the maximal degree possible,” as new cases rise, the Washington Post reported. Two cities where the rallies are expected to take place, La Crosse and Green Bay, have been designated COVID-19 “red zones,” the paper said.

Meanwhile, House Democrats are making another push to provide a fresh round of federally funded unemployment benefits to replace the $600-a-week federal benefit that expired in July. On Monday, Democrats unveiled a scaled-down version of the HEROES Act, their proposed relief and stimulus package that passed in the House in May and was never acknowledged by Majority Leader Mitch McConnell in the Senate. Originally the package had a $3 trillion price tag. The revised version would cost $2.2 trillion.

A vote scheduled for late Wednesday was postponed until Thursday to leave time for last-ditch talks with the Trump administration. The vote comes as the Labor Department revealed that 837,000 Americans applied for jobless benefits in the latest week, in a release that did not include California, where the state has stopped accepting new claims as it investigates potential fraud.

• A Hollywood film-industry coalition is urging Congress to come to the aid of the nation’s movie theaters amid the coronavirus crisis, or risk losing most of them, MarketWatch’s Mike Murphy reported. “Without a solution designed for their circumstances, theaters may not survive the impact of the pandemic,” the group — comprising the National Association of Theatre Owners, the Directors Guild of America, the Motion Picture Association and more than 70 film directors, producers and writers — said in a letter sent Wednesday to House and Senate leadership. Some of the most influential directors in Hollywood have joined the cause, including Oscar winners Martin Scorsese, Clint Eastwood, Alfonso Cuarón and Sofia Coppola. According to the group, 93% of U.S. movie-theater companies posted losses of 75% or more in the second quarter due to coronavirus-related closures.

• U.S. airlines are set to start furloughing workers on Thursday, after lawmakers and the White House failed to agree on a broad pandemic relief package that includes more federal aid for airlines, the Associated Press reported. American Airlines CEO Doug Parker said that if Washington comes up with a deal with $25 billion for airlines “over the next few days,” the company will reverse 19,000 furloughs set to begin Thursday and recall the workers. United said the impasse forced it to furlough 13,000 workers. United said it told leaders in the Trump administration and Congress that if payroll aid is approved in the next few days, it too could undo the furloughs. The moves by two of the nation’s four biggest airlines represent the first — and likely the largest part — of involuntary job cuts across the industry in coming days.

• Italian Prime Minister Giuseppe Conti is considering asking parliament to extend the country’s state of emergency to the end of January, as he works to avoid a fresh surge in COVID-19 cases that has been seen elsewhere in Europe, the Guardian reported. The state of emergency was due to expire in mid-October. It allows officials to avoid red tape in making decisions. Italy was an early hot spot in the pandemic, but managed to curb the spread via a strict lockdown between March and May. Italy has 314,861 confirmed cases, according to data aggregated by Johns Hopkins University, and 35,894 people have died.

• New research conducted in India found that children may play a bigger role than previously thought in spreading COVID-19 based on data gathered from contact-tracing efforts, MarketWatch’s Jaimy Lee reported. The study, published Wednesday in Science magazine, examined exposure to roughly 85,000 confirmed cases in two Indian states, where confirmed coronavirus cases skew younger than in the U.S. They found that people who had close social contact or direct physical contact to someone with COVID-19 had a 10.7% risk of transmission. That risk fell to 4.7% for lower-risk contact with infected individuals. But among children between the ages of 0 to 14 years old and their peers, and for adults older than 65 years old and their peers, there was “enhanced transmission risk.” And researchers say they found “high prevalence of infection among children who were contacts of cases around their own age.” To what degree children, especially young ones, transmit the virus is largely unclear. A study published in JAMA Pediatrics in July found that out of 132 children with mild to moderate forms of COVID-19, those younger than five years old had significantly more viral genetic material in their noses than older children and adults. In the U.S., there are 624,890 total cases of children having COVID-19, making up 10% of all. U.S. cases, as of Sept. 24, according to the Academy of American Pediatrics . Researchers for the Science study noted that most research so far has focused on higher-income regions like China, Europe, and the U.S.

The global death toll from COVID-19 stands at 1.02 million, the Johns Hopkins data show, while 23.7 million people have recovered.