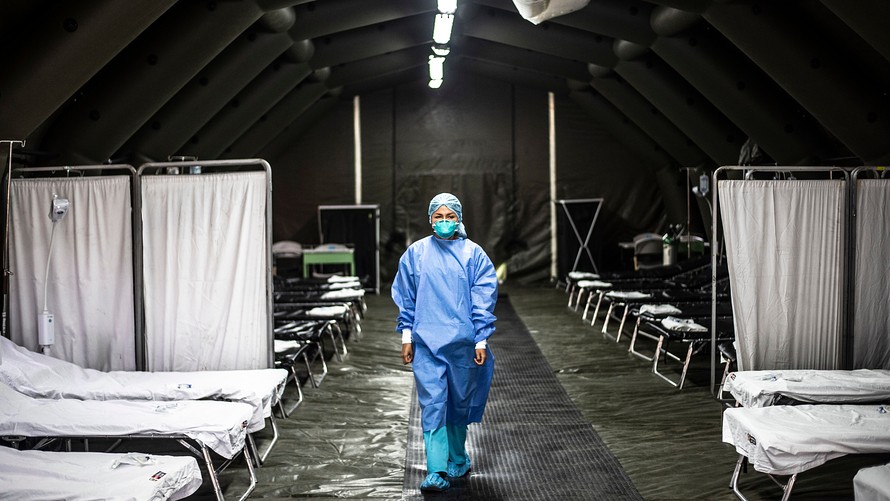 Getty Images
A health-care worker on the job in Peru.

The global death toll from the coronavirus that causes COVID-19 climbed above 365,000 on Saturday, as Brazil, Peru and Mexico all reported spikes in infections, while President Donald Trump announced he is pulling the U.S. out of the World Health Organization.

Brazil has suffered big increases in infections for days now and its death toll has passed that of early hot spot Spain, according to the Brazilian Health Ministry. Peru and Mexico have also seen steep rises in the past few days, with Mexico’s case toll now exceeding that of China, where the illness was first reported late last year.

South Korea has closed more than 200 schools that had reopened Wednesday, after recording 79 new cases of COVID-19 on Thursday, as the Guardian reported. South Korea was widely praised for its initial response to the pandemic, implementing a robust testing-and-tracing program that appeared to have succeeded in containing the disease’s spread. Officials have been working to trace a cluster of infections in Seoul that appeared to have come from nightclubs. The country is now postponing the reopening of a further 800 schools.

In the U.S., Trump said he is terminating his country’s membership of the WHO, which is working to support global efforts to develop a vaccine and treatments for the virus. Trump had previously threatened to pull funding for the agency. He made the announcement at a very brief press conference, blaming the WHO for allying with China and failing to act quickly enough to contain the virus. He did not take any questions from reporters and he did not reference Minneapolis, where protests have raged for days since the killing of an unarmed black man at the hands of a white police officer.

Elsewhere, the Centers for Disease Prevention and Control issued a set of guidelines for employers as workers prepare to return to offices. The CDC is recommending that companies continue to let workers socially distance by seating them at least six feet apart and erecting plastic or plexiglass shields around them.

Workers should have their temperature taken on arrival at work along with a quick check for any coronavirus-type symptoms, the guidelines recommend. Workers should be encouraged to make their own way to work and avoid public transport. Where possible, workers should wear face masks, along with any guests or visitors.

In New York, Gov. Andrew Cuomo signed an executive order that allows store owners to deny entry to people who refuse to wear a face mask. Public health experts, including Dr. Anthony Fauci, the nation’s leading infectious-disease expert, has advised Americans to wear face masks in situations where social distancing is impossible, as a way to protect themselves and their fellow citizens from being infected.

Read now: Phase 1 of New York City reopening could send up to 400,000 employees back to work

The face-mask issue has been caught up in the culture wars currently being waged in a divided U.S., with some companies actually banning mask wearers from entering their premises. The Washington Post reported on a Kentucky gas station where nobody is allowed to enter the adjoining convenience store while wearing a mask, a flooring store near Los Angeles that is encouraging handshakes and hugs while banning face coverings, and a campground in rural Wisconsin that has pledged to treat customers in masks as if they were robbers.

All 50 U.S. states are in the process of reopening and lifting restrictions on movement, with Illinois on Friday allowing businesses including barbers and hair salons to open, along with restaurants that can offer outdoor seating.

There are now 5.97 million cases of COVID-19 worldwide, and 365,796 people have died, according to data aggregated by Johns Hopkins University. More than 2.5 million people have recovered.

Don’t miss: Long lines and plenty of limitations on the other side of Spain’s pandemic

Commerce Department data released Friday showed personal income rose by 10.5% in April, boosted by government relief payments to households, but consumer spending fell 13.6%, more than the 13% forecast by economists polled by MarketWatch. Economists were expecting a 2.1% decline in personal income.

“While social-distancing measures are gradually being relaxed across the country, we should not forget that lingering virus fear and restrained incomes will continue to constrain consumers’ willingness and ability to spend,” said Lydia Boussour, senior economist at Oxford Economics. “We estimate household outlays will likely contract around 15% in Q2, or nearly 50% annualized, while real GDP shrinks by just under 40% annualized.”

Separately, the Commerce Department said the U.S. trade deficit in goods increased by 7.2% in April, according to an advanced estimate. The gap in goods stood at $69.7 billion in April, up from a revised March figure of $65 billion.

Economists polled by MarketWatch had expected a trade deficit of $63 billion for April. The Commerce Department’s report also showed a 0.4% rise in advanced wholesale inventories and a 3.6% decline in advanced retail inventories.

“Our results, amidst this global crisis, demonstrated our ability to execute at speed, innovate at scale and the strength of our business model,” Salesforce Chief Executive Marc Benioff said in a statement announcing the results. Benioff, who co-founded the San Francisco–based cloud-computing giant, regained the title of sole CEO in February after sharing the title briefly with executive Keith Block.

Later, during a conference call with analysts, Benioff said Salesforce has heard from more companies than ever, including customer AT&T Inc. (NYS:T)  that are accelerating their operations to a “digital-first world.”

At wholesaler Costco Co., profit and sales lagged expectations as the company spent nearly $300 million in wages and extra cleaning and disinfecting during the pandemic. The company had already warned that higher e-commerce sales would not fully offset the impact of closed stores as consumers complied with stay-at-home orders. Shutdowns also hurt Costco’s travel business, food courts and departments such as optical and photo.

Elsewhere, companies continue to bolster liquidity by fundraising and to update investors on their reopening plans.

Here are the latest things companies have said about COVID-19:

• Big Lots Inc. (NYS:BIG)  reported a first-quarter profit that was well above expectations and provided an upbeat outlook, as same-store sales got a boost amid the pandemic. Same-store sales for the second quarter to date “are up strongly,” as the acceleration in the business that started in mid-April has continued, but the trends are expected to moderate for the rest of the quarter, the company said. It expects second-quarter EPS of 65 cents to 80 cents, compared with the FactSet consensus of 24 cents. Separately, Big Lots declared a regular quarterly dividend of 30 cents a share, payable June 26 to shareholders of record on June 12.

• Dell Technologies Inc. (NYS:DELL) said the pandemic has boosted its business in certain sectors as it showed a financial performance that was well beyond expectations. “Customers need essential technology now more than ever to put business continuity, remote working and learning plans into practice,” Chief Operating Officer Jeff Clarke .

• Five Below Inc. (NAS:FIVE)  has reopened over 75% of its stores, with stores reopening in all but four states, where curbside pickup is available. The off-price retailer with products aimed at teens and tweens, has over 900 stores in 36 states. In addition to the more-than 700 stores that have been reopened since April 21, as COVID-19-related lockdown restrictions have eased, the company said it has opened 40 new stores so far this year, and continues to expect to open 100 to 120 new stores in 2020.

• Party City Holdco Inc. (NYS:PRTY) reached a transaction support agreement, or TSA, with its bondholders, which aims to reduce leverage by about $450 million, raise $100 million in new capital and eliminate substantially all of the restrictive covenants and certain events of default. The TSA is expected to lead to an exchange offer in which the 6.125% 2023 and 6.625% 2026 senior notes are exchanged for 19.9% of Party City common stock outstanding, $100 million in 10% notes due 2026 and $185 million in notes due 2025. The company will also initiate a rights offering in which certain note holders will have the right to buy a portion of $50 million of 15.00% senior notes due 2025.

• Sonoma Pharmaceuticals Inc. (NAS:SNOA) , a California-based producer of hypochlorous acid products, and partner Dubai-based MicroSafe Group said their Nanocyn disinfectant and sanitizer was entered into the Australian Register of Therapeutic Goods for use against the novel coronavirus. Nanocyn is manufactured using Sonoma’s Microcyn technology. “We have been fighting global pandemics for nearly 20 years with our safe and non-toxic Microcyn based disinfectant and we are very pleased with the test results and subsequent approval of the SARS-CoV-2 (COVID-19) label claim for our Nanocyn disinfectant in Australia,” said MicroSafe Chief Executive Safa Qadumi. “The label claim comes with a 30 second virucidal kill time on hard surfaces, a landmark kill time for a non-toxic disinfectant.”

• Williams-Sonoma Inc.’s (NYS:WSM) online business experienced “breakout” growth in the latter part of the first quarter and “continues to accelerate,” making up for store closures amid the coronavirus pandemic. Sales reached $1.24 billion, flat in comparison with a year ago, thanks to “a significant acceleration in e-commerce revenue growth to over 30%. The company did not provide guidance due to the pandemic and “the continuing macroeconomic uncertainty that could impact its performance.” 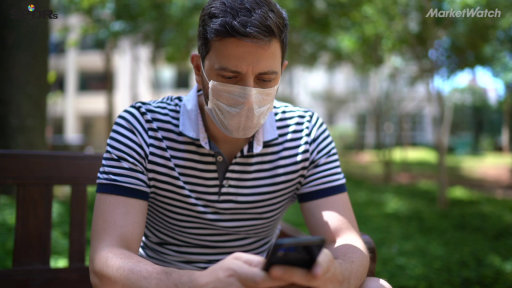 Substance use is rising during COVID-19. Here's how AI could help

As 12-step groups have been forced to close due to the COVID-19 pandemic, technology is helping addicts continue their recovery.