Cinemark’s revenue falls 99% as theaters remain closed, and Mallinckrodt says it is looking at possible bankruptcy 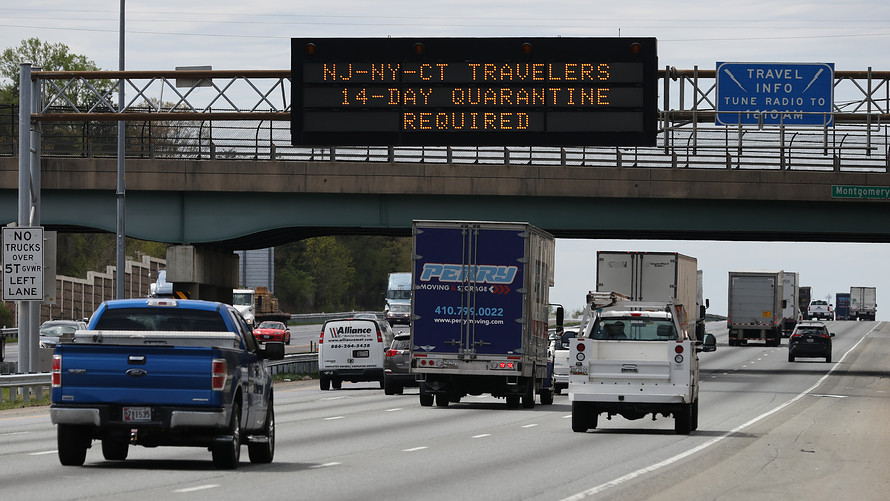 Getty Images
A billboard in Maryland reminded travelers in mid-April of the need to quarantine if coming from certain states with elevated rates of COVID-19 infection.

The U.S. case tally for the coronavirus illness COVID-19 rose by fewer than 50,000 on Monday for a second straight day, data aggregated by Johns Hopkins University showed, although cases were rising in some states that had seemed to have gotten the spread under control earlier this year.

The U.S. added about 48,000 new cases on Monday, and 524 fatalities, boosting the death toll to 156,133. A Wall Street Journal analysis of Johns Hopkins data found that while infections are slowing in recent hot spots including California and Florida, states in the Northeast and Midwest are seeing increases over a seven-day period. These include Connecticut, Massachusetts, Rhode Island and New Jersey, which were previously showing signs they were containing the spread.

Florida’s numbers may be understated after the state closed testing sites over the weekend as Hurricane Isaías approached. The hurricane made landfall in North Carolina instead of Florida, and was causing floods, fires and power outages.

President Donald Trump said in an interview with Axios that aired on HBO on Monday night that the virus is “under control as much as you can control it,” and reiterated his argument that greater levels of testing are behind rising case numbers. Experts have consistently provided the rebuttal that testing is not the reason for high figures and that the U.S. needs to step up the pace of testing, along with tracing contacts and isolating them to get the pandemic under control.

A Harvard Global Health Institute tracker shows 10 states flashing red, meaning they have at least 25 new cases per 100,000 people over a seven-day period, which researchers say means they are at a tipping point, where stay-at-home measures are necessary again. Those states are Florida, Mississippi, Louisiana, Alabama, Georgia, Nevada, Tennessee, Arizona, South Carolina and Oklahoma.

Dr. Ashish Jha, director of the Harvard Global Health Institute, expressed his frustration with this Trump tweet on testing that again called on schools to reopen:

“This is the kind of comment that makes it so hard to open schools safely,” he said. “We need to get our kids back to school. But we can’t do it with noise and bluster.”

“We need to: stop polarizing the issue, stop pitting teachers against kids; and make this a science-based discussion,” Jha tweeted, adding: “So frustrating.”

The head of the United Nations, António Guterres, said overnight that more than a billion children have had their educations disrupted by the pandemic and getting them safely back into classrooms is a priority. But a study from the U.K., which has the fourth highest death toll from COVID-19 in the world, found that without adequate procedures to test and trace positive cases, there could be a wave of COVID-19 cases later in the year.

The study, which was published in the Lancet, used a model developed by researchers from University College London and the London School of Hygiene and Tropical Medicine, and found there could be twice as many infections in December as in the initial outbreak without a strategy to contain them.

“To prevent a second COVID-19 wave, relaxation of physical distancing, including reopening of schools, in the U.K. must be accompanied by large-scale, population-wide testing of symptomatic individuals and effective tracing of their contacts, followed by isolation of diagnosed individuals,” the authors warned.

There are now 18.36 million confirmed cases of COVID-19 worldwide, the Johns Hopkins data show, and at least 695,848 people have died. The data indicate that 10.9 million people have recovered.

See: Dr. Osterholm: Americans will be living with the coronavirus for decades

There was bad news from France when its COVID-19 scientific council said that country is at risk of losing control of the pandemic “at any moment.” The warning came as official data showed the first increase in intensive-care patients since April.