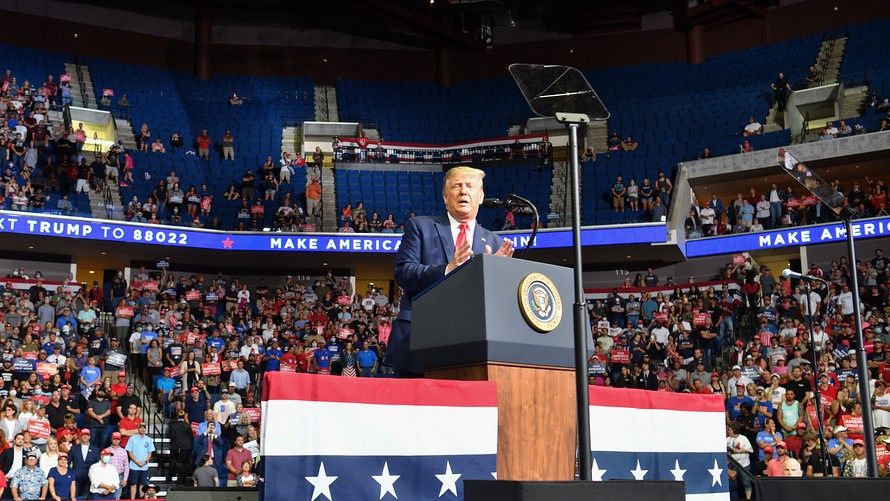 The number of new cases of the coronavirus illness COVID-19 keep rising in the U.S., with signs of acceleration in half the states, including three states recording more than 3,000 new cases in a day, and it’s not because there is more testing.

A resurgence of COVID-19 cases is also occurring outside of the U.S., with the global case total topping 9 million. The World Health Organization reported on Sunday the largest one-day increase in cases, with Brazil and the U.S. leading the way. The U.S. remained by far the world’s leader in overall cases and deaths, with both totals more than double that of Brazil.

As the number of cases were seen rising, President Donald Trump on Saturday held a campaign rally at an indoor arena in Tulsa, Okla. Trump said at the rally, which far fewer people than projected by the campaign, that the increase in new cases was a result of more testing: “So I said to my people, ‘slow the testing down, please.’” White House officials said after that his comments on testing were “tongue-in-cheek.”

Oklahoma is one of the states showing a surge in new cases , with a daily record 478 new cases on Sunday. That is more than five times the 91 new cases Oklahoma was seeing on June 1 , which was when Phase 3 of the state’s reopening plan launched. 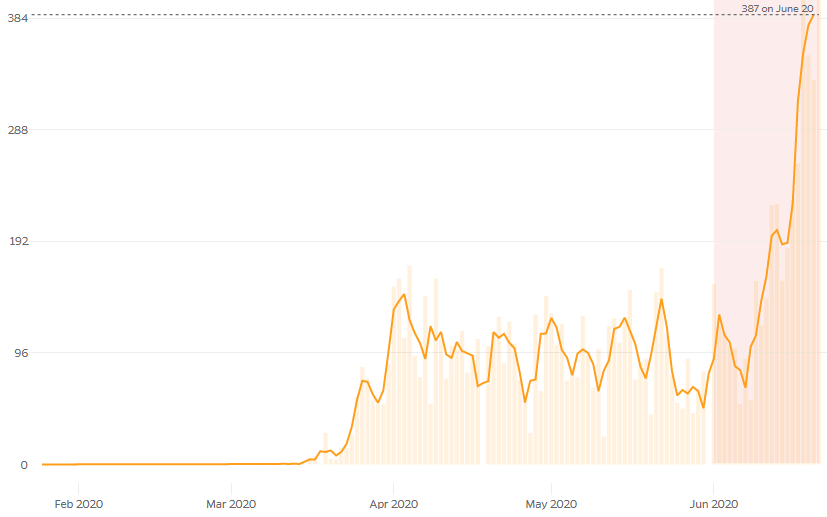 Raymond James analyst Chris Meekins said identified cases last week increased to 9% from 8% the previous week, marking the first uptick seen in several weeks. He said an increase in positive text percentages are also being seen in a number of states, which indicates that rising infections “are definitely NOT” a result of more testing.

“Public health leaders across the country are playing an extended game of” Whac-A-Mole, where “clusters of the virus will pop up; they do their jobs and control the spread, only to have new cases pop up elsewhere,” Meekins wrote in a note to clients. 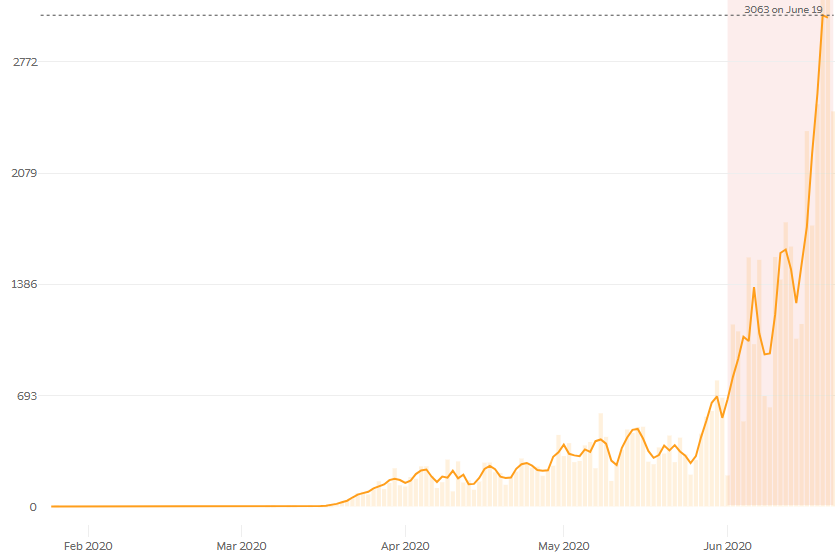 Trump will next attend a rally in Phoenix, Ariz., on Tuesday , a state that is also seeing a spike in new cases to new daily records.

Separately, the White House said it was scaling back temperature checks for people entering the grounds, although people in close proximity to Trump and Vice President Mike Pence will still receive COVID-19 tests. And on Sunday, White House trade advisor Peter Navarro said on CNN that stockpiles were being filled in anticipation of a possible second coronavirus wave in the fall.

The global COVID-19 case tally increased to 9,008,850 million on Monday afternoon, while the death toll rose to 469,220, according to data aggregated by Johns Hopkins University . About 4.47 million people have recovered.

The U.S.’s case and death tolls continue to lead the world by a large margin, with COVID-19 cases growing to 2.29 million and the number of deaths rising to 120,121. About 622,000 people have recovered, the Johns Hopkins data shows.

There are 25 states that showed an increasing trend in cases this past week, with Florida, Texas and California leading the way, with each state recording more than 3,300 new cases on Sunday alone. There are 19 states showing a decline in the trend of new cases, as well as the District of Columbia, while 6 states are flat.

See related : As coronavirus cases surge, California is the latest state to require face masks — here’s why other states may want to follow its lead.

New York City, the early epicenter of the outbreak in the U.S., entered Phase 2 of its reopening on Monday, which includes retail stores, hair salons and barbershops, as COVID-19 cases and death tolls continue to fall.