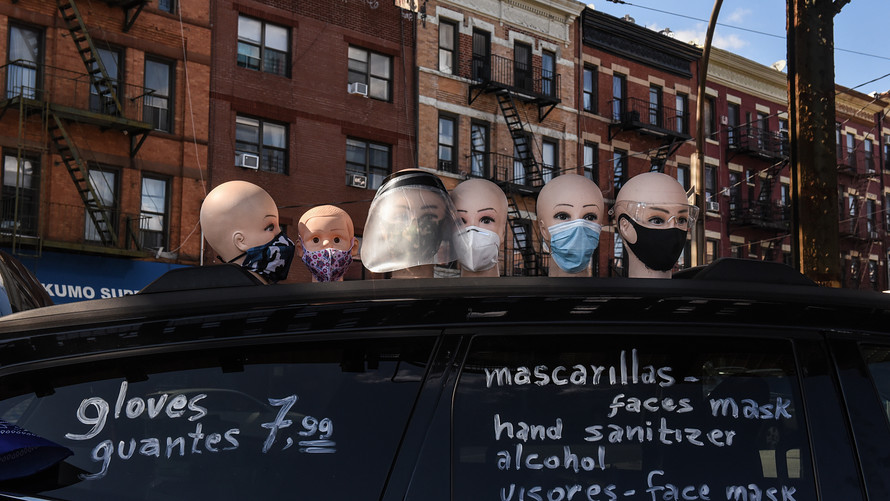 Getty Images
Protective masks displayed Thursday on top of a car in the Bushwick neighborhood of Brooklyn.

The U.S. Labor Department said the pandemic cost 20.5 million jobs in April, pushing the unemployment rate to a post–World War II high and deepening the economic crisis, while in New York, a child died of a rare condition linked to the virus.

Restaurants, retailers and hotels were worst hit by job cuts, but every industry suffered some pain. Even the health-care sector lost 1.4 million jobs as the crisis has kept patients away from doctors’ offices for fear of becoming infected and caused the postponement of many elective procedures.

The unemployment rate leapt to 14.7% from a 50-year low of 3.5% two months ago, but the share of idled workers is much higher. If millions of Americans who have been furloughed and expect to return to their jobs are counted, the Bureau of Labor Statistics said the jobless rate would have almost 5 percentage points higher at nearly 20%, as MarketWatch’s Jeffry Bartash reported.

Kyle Herrig, president of nonpartisan nonprofit Accountable.US, said the numbers are horrific and criticized the federal government’s relief programs, which have mostly helped big public companies instead of smaller businesses that are now close to bankruptcy.

“Rather than taking decisive action to help workers, the Trump administration continues dithering as yet another month brings horrific jobs numbers with millions more Americans unemployed,” he said in a statement. “From the earliest days of this public health crisis, the administration bungled the response. Helping publicly traded companies pay the bills rather than assisting mom and pop small businesses meet payroll.”

The New York Federal Reserve said a disportionate amount of funds distributed by the government’s Paycheck Protection Program, or PPP, did not go to the regions that have been hit hardest by the crisis.

“In New York, the epicenter of the coronavirus in the United States, less than 20% of small businesses have been approved to receive PPP loans,” the regional central bank’s economists wrote in a report published Wednesday. “In contrast, more than 55% of small businesses in Nebraska are expecting PPP funding.”

The report noted the discrepancies have generated heated political discussions . One possible explanation for them is that banks, which pass along applications to the program, favor existing customers as they already have relevant information on them and can screen them more quickly.

“It has been widely documented that banks prioritize businesses with existing lending relationships for cost savings reasons and to avoid fraudulent applications,” said the report. “Arguably, lenders’ preference for their own depository base could be an important factor in explaining the observed PPP loan approval data.”

Outside of relief programs, however, there are concerns that the federal government is favoring “red” states over “blue” states in the distribution of vital supplies.

On Thursday, the HIV Medicine Association and the Infectious Diseases Society of America sent a letter to Vice President Mike Pence questioning the selection process for the distribution of remdesivir, the drug made by Gilead Sciences Inc. /zigman2/quotes/210293917/composite GILD +0.13%  that won emergency-use authorization last week from the U.S. Food and Drug Administration as a treatment for COVID-19. That came after clinical trials found the drug may speed up recovery times for some patients. There are currently no approved treatments for the virus.

A physician associated with Boston Medical Center tweeted that the hospital hasn’t received any doses of remdesivir. “We have the second highest absolute case count and highest per bed in Boston,” Dr. Benjamin Linas, an epidemiologist at the safety-net hospital, tweeted on Wednesday. “We also had no access to early trials. Today, the family of a dying patient asked me why we do not have RDV. What am I supposed to say?”

For more, read: Infectious-disease doctors ask government to explain how it decides who gets Gilead’s remdesivir

New York Gov. Andrew Cuomo has described his state’s struggles to source vital health-care supplies and equipment at the height of the crisis, as the federal government forced states to compete with each other, and even with the Federal Emergency Management Agency, sending prices higher.

Trump said at one point that he had instructed Pence not to call governors who criticized the federal response to the pandemic.

On Friday, Trump called the 20.5 million jobs lost in April “no surprise” and said those jobs “will all be back.”

In an interview on Fox News, Trump said he’s having a “ very hard time with China” and has not decided how to handle their trade relationship, following a call between negotiators for both sides.

There are now 3.97 million cases of COVID-19 globally, and 275,527 people have died, according to data aggregated by Johns Hopkins University.

More than 1.3 million people have recovered.

Cuomo reported another day of declining hospitalization and intubation rates at his daily news briefing. But another 216 New Yorkers died of COVID-19 on Thursday, down from 231 a day earlier.

Adding to the gloom, a five-year old died in Manhattan on Thursday from what doctors believe is a rare condition stemming from the virus that causes life-threatening inflammation in children.