COVID-19 cases and testing are surging as U.S. heads into Thanksgiving holiday

In the week leading up to Thanksgiving, health care providers have reported rising numbers of people getting diagnostic tests, as some have sought out testing in advance of family dinners or travel plans 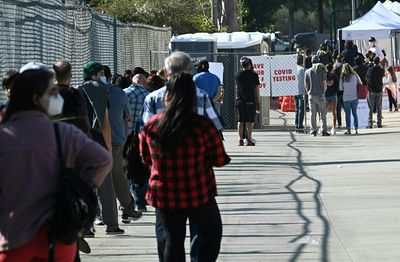 A surge in the number of Americans testing positive for the coronavirus this month is worrying medical experts at the same time as the nation prepares for its first major indoor holiday during the COVID-19 pandemic.

In the week leading up to Thanksgiving, health-care providers have reported rising numbers of people getting diagnostic tests to either rule out or confirm COVID-19 infections, as some have sought out testing in advance of family dinners or travel plans.

The U.S. has conducted more than 1.7 million COVID-19 tests every day during the week of Nov. 23, according to data compiled by The COVID Tracking Project. (Back in the beginning of the month, the nation was averaging about 1.1 million tests a day.)

In New York City, it is become common to see socially distanced lines a block long leading up to City Practice Group of New York, or CityMD, urgent care centers and CareCube testing sites. According to media reports, people have waited for up to four hours to get tested outside of Boston, while hundreds of cars snaked around a testing site located at Dodger Stadium in Los Angeles.

“Certainly now as we head into holiday time, we’re also seeing [testing numbers] starting to rise, and we’re preparing for an even further increase,” said Amir Dan Rubin, president and CEO of One Medical, a direct primary care provider that went public earlier this year under the name 1Life Healthcare Inc. /zigman2/quotes/205852497/composite ONEM -0.35% .

Laboratory Corporation of America Holdings /zigman2/quotes/203174601/composite LH +1.09%  and Quest Diagnostics Inc. /zigman2/quotes/201001842/composite DGX -0.51% , two of the nation’s largest testing providers, both confirmed they have seen a rise in demand for diagnostic COVID-10 tests.

“The CDC doesn’t say an important mitigation step is get a test before you go travel for the holidays,” Admiral Brett Giroir, assistant secretary for health at the Department of Health and Human Services, said Tuesday on a call with reporters. “Because that doesn’t mean that you’re free. And, in fact, we know that a single test can provide a false sense of security. You still have to wear your masks.”

However, it appears that Americans are on the move even as the Centers for Disease Control and Prevention has urged people not to travel for the holiday. The number of people flying daily passed the 1,000,000 mark on Nov. 20 for the first time since March 16, when 1,257,823 people passed through the nation’s airport checkpoints, according to the Transportation Security Administration. The number of airline passengers in the U.S. plummeted after that as people began staying home in March, and nonessential businesses across the U.S. shut down.

But experts say that it isn’t just travelers and people seeking to get pre-emptive negative tests before socializing for Thanksgiving that are driving the surge in testing numbers.

“I’m certain that there is a component of people doing this assurance testing to visit their family and friends,” said Dr. Leana Wen, an emergency physician and public health professor at George Washington University. “But that’s not what we are seeing overall as a driver for testing. That’s because you can see [that] test positivity is on the rise across the country.”

Thanksgiving is the first cold-weather American holiday to take place during the pandemic, Wen said, and the looming December holidays are also increasingly of concern, especially if there are spikes in cases, hospitalizations, intensive care unit admissions, and deaths associated with Thanksgiving get-togethers. (The trajectory for the virus tends to follow a pattern of cases increasing two weeks after exposure. The number of hospitalizations will rise two to three weeks after that, ICU visits the following week, and then deaths a week later.)

“It’s the same issue that by then will almost certainly be at an even higher baseline level of infection,” she said. “Those are also times that people tend to gather in person. It will probably be even colder and harder to gather outdoors. So I again really worry about this very dangerous winter.”

There have been a total of 12.6 million confirmed cases of COVID-19 in the U.S., according to Johns Hopkins University. There were more than 169,000 new cases on Tuesday. That’s roughly how many cases there were worldwide (179,073) when the U.S. went into lockdown in mid-March.