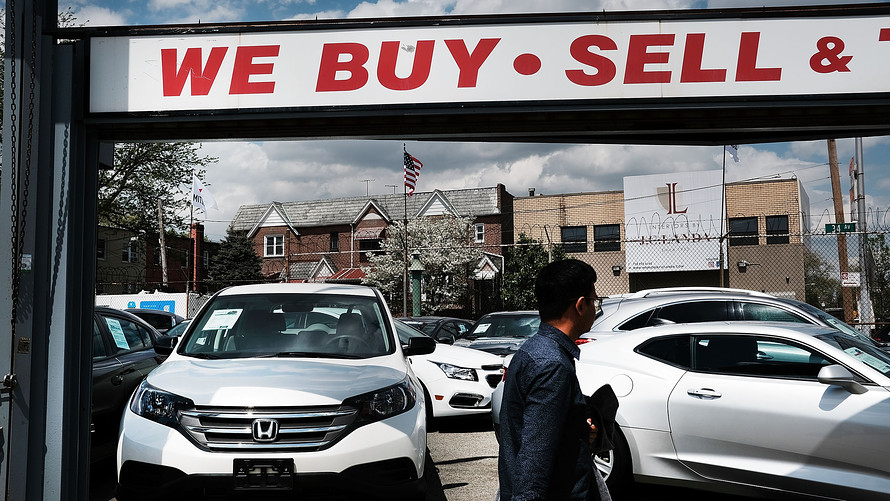 It is boom time for junk-rated slices of subprime auto-bond deals.

Auto-loan delinquencies may have approached crisis-era levels recently, but that hasn’t put the brakes on demand for riskier slices of subprime auto-loan bond deals.

New subprime auto bonds with “junk” BB-ratings have been selling this month at yields as low as 3.5%, versus as high as 9% four years ago, according to bond tracking platform Finsight .

Demand has been so strong for low-rated subprime auto bonds that some investors now feel crowded out.

“This is one area that pricing has tightened in,” he told MarketWatch. “And now that yields reside at 3.5%, there is just more compelling BB-rated paper elsewhere in structured credit.”

Bond yields move in the opposite direction of prices. Investors across fixed-income markets have been on the prowl for higher returns at a time when 10-year Greek government bond yields /zigman2/quotes/214974209/realtime BX:TMBMKGR-10Y -0.44%  have plunged below 1%, 10-year U.S. Treasury note yields /zigman2/quotes/211347051/realtime BX:TMUBMUSD10Y +3.54%  trade near 1.56% and the cost of U.S. investment-grade companies to borrow in the bond market has slipped to at an all-time low of 2.56%.

Auto loan bonds differ from corporate or sovereign borrowings since their performance hinges directly on the ability of consumers to repay their debts, rather than a business or government.

Read : Tesla, gold and the dollar soar: An ‘everything rally’ has some stock-market investors fearing how it all ends

Consumers have benefited from a robust labor market, with the unemployment rate hovering near a 50-year low of 3.5%, while income gains have outpaced debt growth, a combination that should bode well for auto lenders, according to a Morningstar DBRS outlook published Wednesday.

But the credit-rating agency also warned that under a recession scenario, subprime auto bonds would be vulnerable to “increased delinquencies on the horizon because these borrowers tend to be more financially stretched and have fewer reserves, if any, than those of their prime counterparts.”

When Flagship Credit Acceptance sold its $355 million subprime auto-loan bond deal in early February, it pooled loans with a weighted average interest rate of 16.09% and average borrower FICO scores of 587, according to Kroll Bond Rating Agency.

Experian, one of the main U.S. credit-reporting bureaus, considers any borrower with a credit score between 580 and 669 to be subprime.

Bond-market investors typically earn higher yields when they buy lower-rated securities that come with higher risks of losses. Investors have been betting on U.S. consumers to continue driving the U.S. economy, which in July entered a record 11th year of expansion.

Federal Reserve officials gave bullish investors more reason to think a recession isn’t in the cards just yet, after the release Wednesday of minutes of the rate-setting Federal Open Market Committee’s January meeting, which signaled that the U.S. economic outlook looked brighter in late January than they had expected.

The minutes also suggested the central bank may be more inclined to ease rates than to raise them in the near term, which helped propel major U.S. equity benchmarks higher Wednesday, including the S&P 500 index /zigman2/quotes/210599714/realtime SPX +0.36%  and Nasdaq Composite /zigman2/quotes/210598365/realtime COMP +0.35%  , which scored record finishes.

But even with a favorable economic backdrop, recent data on U.S. household debt points a climb in late-stage auto-loan delinquencies.

The Federal Reserve Bank of New York said that 4.9% of the record $1.33 trillion pile of U.S. auto loans were at least 90 days past due in the fourth quarter of 2019, in its latest report on household debt.

That translates to roughly $65 billion of seriously past-due auto loans, a record when factoring in the significant growth of auto financing since the 2007-’08 financial crisis, per Fed data.

So why have investors been chasing the subprime auto-bond rally? For one thing, auto bonds are structured to cushion investors from some level of expected loan delinquencies and losses, which can total as much a 18% of certain subprime auto-loan transactions, according to Moody’s Investors Service.

This week, Moody’s underscored the point in a new report showing it downgraded zero auto bonds over the past 12 months ending Dec. 31, while upgrades were applied to almost 19% of the transactions it supplied with ratings for the same period.