CrowdStrike stock bounces back after earnings typo is corrected

Stock fell as much as 6% in after-hours trading, but swings to 6% gain after missing number in forecast is replaced

CrowdStrike
CrowdStrike made its trading debut on the Nasdaq in June after pricing its IPO at $34 a share.

CrowdStrike Holdings Inc. topped Wall Street estimates with quarterly results Thursday, and the cybersecurity company’s stock turned around after a typo in its outlook was corrected.

That equates to a swing of roughly $1.38 billion in market capitalization, from a loss of about $718.5 million to an increase of about $657.5 million.

CrowdStrike expects an adjusted loss of 9 cents to 8 cents a share on revenue of $135.9 million to $138.6 million in the fourth quarter, but the original press release dropped the 1 from the top end of that range, making it $38.6 million.

“It was a typo related to the wire service,” George Kurtz, CrowdStrike co-founder and chief executive, told MarketWatch in an interview Thursday afternoon. “The release was reissued.” 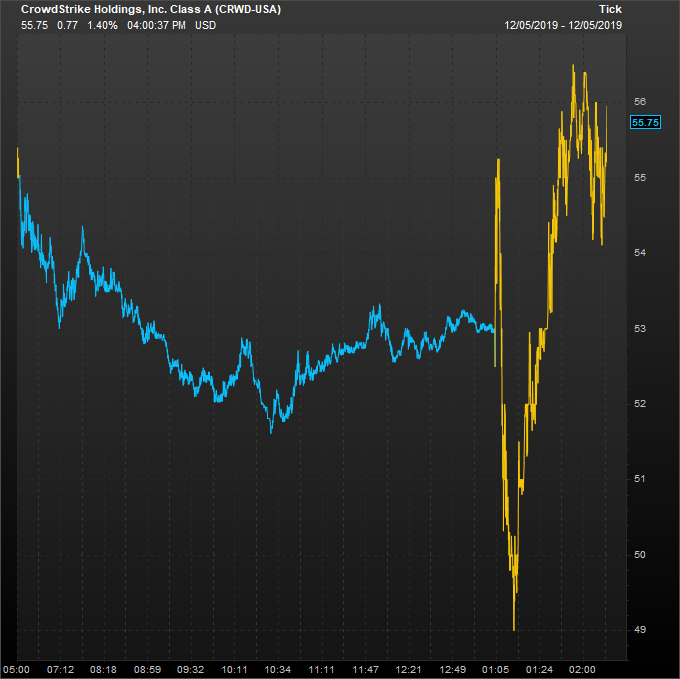 Kurtz pointed to two “significant milestones” in the quarter, with annual recurring revenue, or ARR, growing 97% from last year and topping half a billion dollars, and positive cash flow in the quarter. ARR is a Software-as-a-Service metric that shows how much revenue the company can expect based on subscriptions. CrowdStrike reported ARR of $501.7 million for the quarter, while the Street expected $471 million, while the number of subscription customers jumped by 772, or 112% year-over-year, to a total of 4,561 customers.

“This, I think, is reflective of a very strong SaaS business,” Kurtz told MarketWatch. “You go through this curve where you have losses and then you begin to generate cash.”

Of the 20 analysts who cover CrowdStrike, 12 have overweight or buy ratings, seven have hold ratings, and one has a sell rating, with an average price target of $79.90, according to FactSet data.