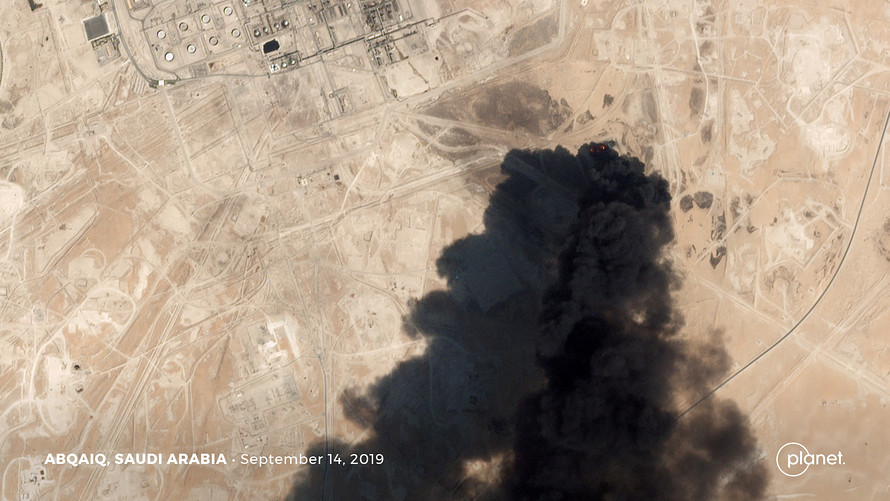 Planet Labs via Reuters
A satellite image shows smoke from an attack on an Aramco oil facility in Abqaiq, Saudi Arabia, on Saturday.

Brent crude prices for November delivery  , the global benchmark, initially shot up 18% as trading began late Sunday, but quickly settled down to a gain of about $7, or 13%, to $67.86 a barrel.

Saturday’s attack on Saudi oil fields knocked out about half that country’s oil production. Saudi officials said Sunday they expect to regain about one-third of that output capacity by Monday, but experts said it may take weeks for production to return to normal levels.

Late Sunday, President Donald Trump said in a series of tweets that he has authorized the release of U.S. strategic oil reserves “if needed” to “keep the markets well-supplied.”

Prominent crude-oil strategist Phil Flynn at Price Futures Group told MarketWatch on Sunday that the attack was a “big deal” and could cause a major spike in oil prices because of its disruption to global supplies.

Stephen Innes, Asia-Pacific market strategist for AxiTrader, agreed, saying in a note Sunday that the attacks are likely to have a destabilizing effect on markets. “We could be dealing with a significant game-changer for oil markets over the short to medium term as security levels continue to flash red,” he said.

Tensions in the region rose as the U.S. blamed Iran for the attacks Sunday, while Iranian officials denied the charges.