Cuomo invokes Alexander Hamilton in war of words with Trump over the U.S. Constitution and who has ‘ultimate authority’

‘State governments possess inherent advantages, which will ever give them an influence and ascendency over the national government,’ Hamilton wrote in 1788 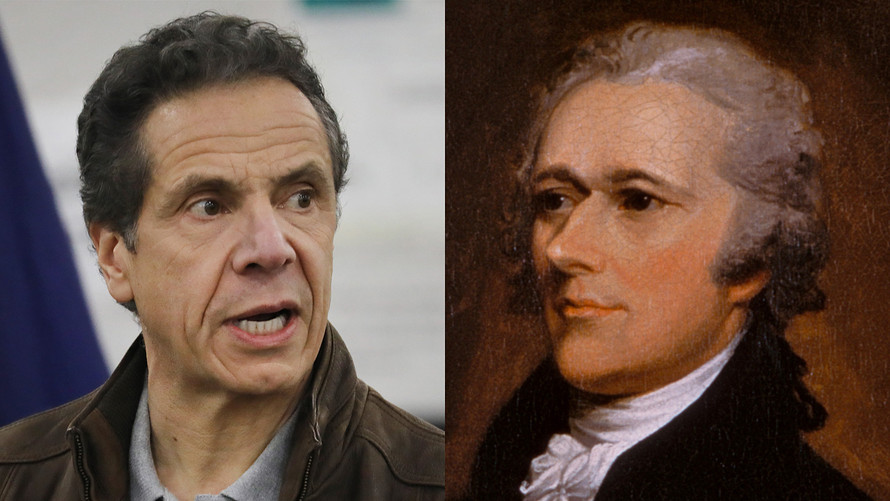 Getty Images
His place in history: Gov. Cuomo said Tuesday that he would not get dragged into a fight with President Trump over who has the “ultimate authority” to restart the economy, but shortly after quoted fighting words by Alexander Hamilton.

New York Gov. Andrew Cuomo, a Democrat, and President Trump are embroiled in a war of words over who has the “ultimate authority” to reopen the economy. As cases of COVID-19 continue to climb, the prospect that the state’s lockdown will continue for weeks, if not longer, also increases.

Cuomo said Tuesday that he would not get dragged into a fight with the president over who has the “ultimate authority” to restart the economy, but the Democratic governor shortly after quoted the following fighting words by one of America’s founding fathers, Alexander Hamilton:

“The State governments possess inherent advantages, which will ever give them an influence and ascendancy over the National Government, and will for ever preclude the possibility of federal encroachments,” Secretary of the Treasury, Hamilton, said in a speech on the U.S. constitution.

“That their liberties, indeed, can be subverted by the federal head, is repugnant to every rule of political calculation,” Hamilton, said in the speech on the constitution to the New York Ratifying Convention, June 17, 1788. (New York ratified the constitution by a vote of 30-27.)

Read also: ‘When somebody is president of the United States, the authority is total.’ Can President Trump save the U.S. economy and save lives from coronavirus? ‘It’s appalling to attach a dollar number to a human life — for noneconomists’

While Hamilton acknowledged that the federal government had limitations and must concede certain decisions to the states, he was a also passionate and vocal supporter of a powerful central government, and was a key figure in appealing to the states to ratify the U.S. Constitution.

Earlier Tuesday, Cuomo vowed to remain above the political fray, and said at his daily press briefing: “This is not time for politics, and it’s no time to fight. I put my hand out in total partnership with the president. If he wants a fight, he’s not going to get it from me. Period. This is a time to work together.”

Trump said he had “ultimate authority” on when to open the economy: “Tell the Democrat Governors that “Mutiny On The Bounty” was one of my all time favorite movies.” He was referring to the mutiny on HMS Bounty in the South Pacific on April 28, 1789; Captain William Bligh was overthrown.

The president has warned that efforts to stem the spread of COVID-19, the disease caused by severe acute respiratory syndrome coronavirus 2, risk leading the economy into a severe recession; the impact has sent the Dow Jones Industrial Index /zigman2/quotes/210598065/realtime DJIA -0.61% on a wild ride in recent weeks.

“A good old fashioned mutiny every now and then is an exciting and invigorating thing to watch, especially when the mutineers need so much from the Captain. Too easy!” Trump tweeted. (Captain Bligh survived the ordeal after completing a voyage of roughly 4,000 miles in the ship’s open launch.)

The president made his comments after a group of six eastern state Democratic governors on Monday said they would jointly develop a plan to reopen the region’s economies and schools. After that announcement, Massachusetts, which is led by a Republican, joined the effort.

On Monday, Cuomo told MSNBC /zigman2/quotes/209472081/composite CMCSA -0.55% , “The Constitution says we don’t have a king. To say, ‘I have total authority over the country because I’m the president, it’s absolute,’ that is a king.” He added, “We didn’t have King George Washington, we had President George Washington.”

Cuomo added that Trump’s assertion were not legal. “It’s a total abrogation of the Constitution. [The] 10th Amendment specifically says power to the states.” The governor also told CNN on Monday evening that Trump’s words were “hostile” and “aggressive.”

Dispatches from a pandemic : Letter from New York: ‘New Yorkers wear colorful homemade masks, while nurses wear garbage bags. ‘When I hear an ambulance, I wonder if there’s a coronavirus patient inside. Are there more 911 calls, or do I notice every distant siren?’

Also Tuesday, the president tweeted: “Cuomo’s been calling daily, even hourly, begging for everything, most of which should have been the state’s responsibility, such as new hospitals, beds, ventilators, etc.,” adding, “...now he seems to want Independence! That won’t happen!”