Death toll rises to 10 as Hurricane Irma barrels through Caribbean, heads for Florida 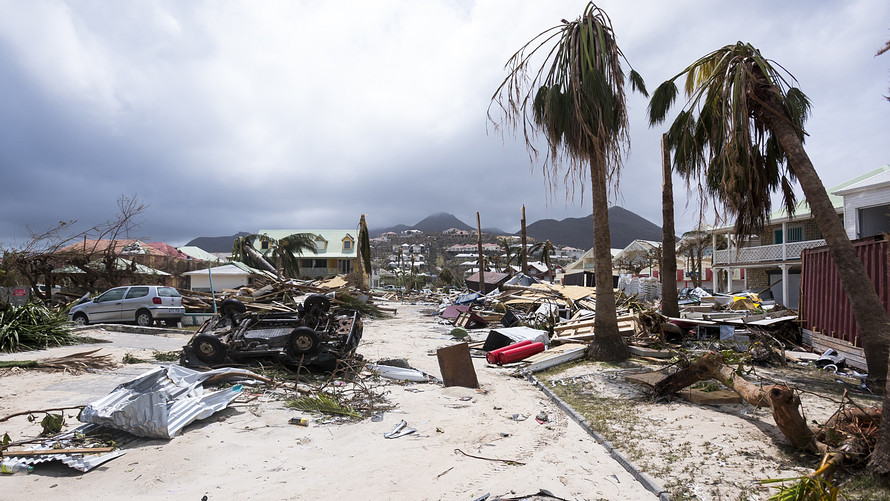 AFP/Getty Images
Damage from Hurricane Irma is seen in Orient Bay on the French Caribbean island of Saint-Martin on Thursday.

At least 10 people have died after Hurricane Irma wreaked havoc on a string of Caribbean islands, with the Category 5 storm still on track to hit Florida on Sunday, where authorities have issued more evacuation orders.

Some of the first islands to be hit are now facing the prospect of a second battering, with Hurricane Jose upgraded to a Category 3 storm in the National Hurricane Center’s latest advisory at 11 p.m. Eastern, a day ahead of a previous forecast. Jose is the third major hurricane of the Atlantic season, the NHC said.

Irma is the most powerful storm ever recorded in the Atlantic basin, with maximum sustained winds of 165 mph, and it’s expected to remain a Category 5 or Category 4 hurricane during the next couple of days, the NHC said.

Irma’s eye is likely to continue to move between Hispaniola, the island divided between Haiti and the Dominican Republic, and the Turks and Caicos Islands overnight. The core of the hurricane will then move between the north coast of Cuba and the Bahamas during the next day or two. Hurricane warnings are in place for those islands, as well as for many parts of the Bahamas and South Florida, including the Florida Keys.

“Given the robust nature of Irma’s structure, it is possible that it will retain strength longer than currently expected, potentially into the Florida Straights as a Category 5,” Weather.com said.

Meteorologist Dr. Phil Klotzbach said Irma has now been a Category 5 hurricane for more than a day and a half, making it the seventh-longest-lasting Category 5 storm in the Atlantic basin. If it continues at that strength until Friday, it could set a record, he said.

So far, the storm has left eight people dead on St. Martin and St. Barthelmy, one dead on Anguilla, and has killed a child on Barbuda. The French Interior Minister said the storm had killed at least eight people in French territories and injured another 23.

“Irma is a potentially catastrophic Category 5 hurricane and will bring life-threatening wind, storm surge and rainfall hazards,” the NHC said in an advisory earlier Thursday.

“The threat of direct hurricane impacts in Florida over the weekend and early next week continues to increase,” it said. 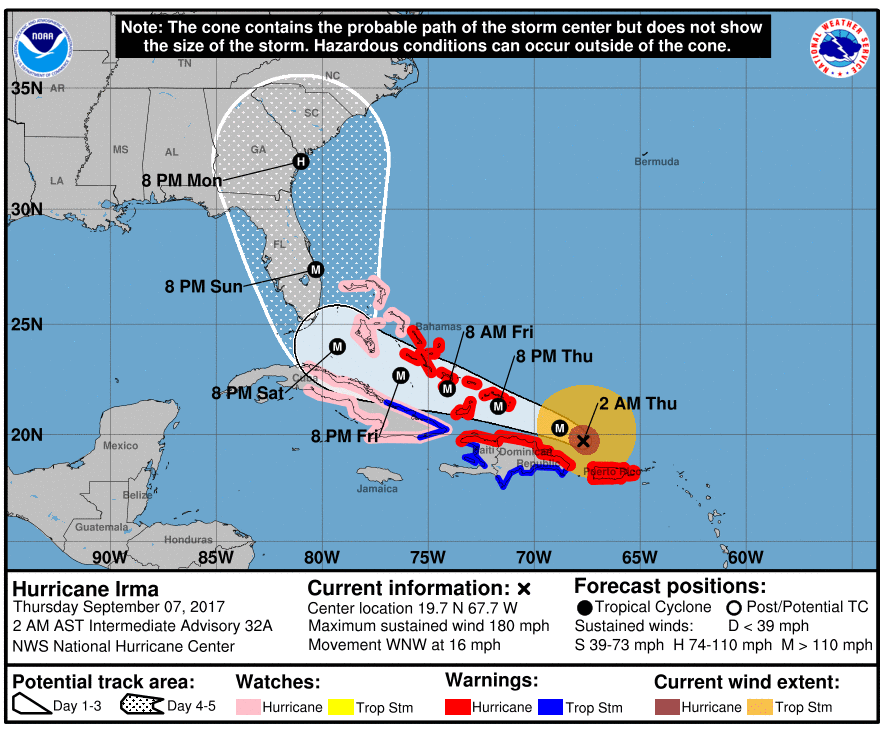 For now, the timing and projected path of a potential strike on Florida is difficult to determine, but forecasters agree that it is likely to be a major event for the state. Hurricane Watch warnings are in effect for parts of south Florida and the Florida Keys.

U.S. authorities have ordered residents to leave parts of coastal south Florida, with Miami-Dade County ordering its first mandatory evacuation in 12 years. The order took effect at 7 a.m. on Thursday and included areas that are seen as particular exposed to storm surge, such as Key Biscayne and Miami Beach, according to local media. Later Thursday, authorities included areas further inland.

“This storm is bigger, faster and stronger than Hurricane Andrew,” Florida Gov. Rick Scott told a news conference, referring to the devastating storm that struck the state 25 years ago.

His biggest concern for now is storm surge, he told CBS.

“You’ve got to listen to your local officials – this storm surge can kill you,” Scott said. “My biggest concern is people don’t understand the amount of potential storm surge. This can cover homes. And we just haven’t seen this. We didn’t see this in Andrew.”