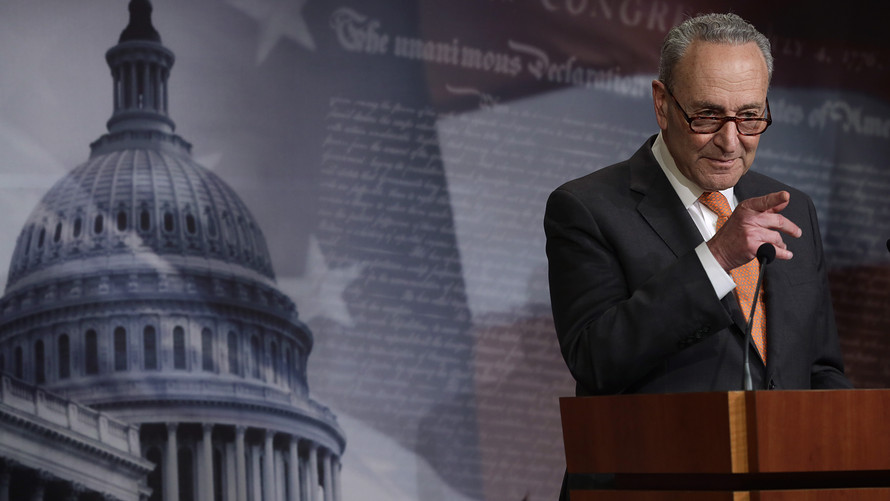 Getty Images
Senate Minority Leader Sen. Chuck Schumer offered a “sense of Congress” resolution condemning Trump’s actions, but it failed to get the unanimous consent it would have required to pass.

Democrats unsuccessfully tried to get the Senate to condemn President Donald Trump’s move to aggressively clear protesters from a park near the White House in order to allow him to visit a church for a photo opportunity. But action on fixes to the underlying issues that brought the protesters out — unequal treatment by police — will take a while, if it comes at all.

The two issues — whether the president was right to use uniformed security forces to move seemingly peaceful protesters from Lafayette Park and how to remedy disparate police treatment — were interwoven on Capitol Hill on Tuesday.

Republicans continued to decry widespread property damage and looting that occurred in several major cities for another night, but shied away from criticizing Trump, who has taken to shows of strength that critics say inflame the situation further. Democrats have emphasized the need for changes in the legal system to deal with problems reflected by the choking death of George Floyd by Minneapolis police, which sparked the unrest.

Read: Pelosi calls on Trump to be a healer-in-chief and not a fanner of the flames of division and unrest

But Tuesday, the harshest Democratic shots were reserved for Trump and the incident at St. John’s Episcopal Church, which was shuttered Monday as Trump stood in front of it, brandishing a Bible proudly for television cameras.

“If Donald Trump wants to gas someone next time, start right here. If he wants to shoot somebody with our federal officials with rubber bullets, start right here,” said Sen. Cory Booker, a New Jersey Democrat who ran to replace Trump. “If he wants to trample them with horses while they peacefully assemble, come to this body because what he did to those Americans in that square yesterday, he did to all of us.”

Democrats offered a “sense of Congress” resolution condemning Trump’s actions, but it failed to get the unanimous consent it would have required to pass when Senate Majority Leader Mitch McConnell objected because he said it insufficiently condemned rioting.

In the House, Majority Leader Steny Hoyer said the incident merited a more serious measure — formal censure — but House Democrats had not discussed the idea.

“It is certainly an action worthy and appropriate to censure and criticize. It was a terrible act,” the Maryland Democrat told reporters on a weekly conference call with reporters. “And it was an act that indicated the total lack of understanding and empathy with the anger and frustration and cry for justice that was being put out, simply to facilitate a photo op obviously designed for political purposes.”

Hoyer said he hope House committees, including possibly the Judiciary, Homeland Security and Government Oversight panels, take a look at the incident and the role Trump played.

One committee chairman, Rep. Bennie Thompson of the Homeland Security Committee, sent a letter to the director of the Secret Service asking for a briefing by Friday on the incident

While the House is out of session until late June, the Senate has come back to Washington after a weeklong Memorial Day break. Republican senators mostly told reporters they had little to say about the incident or defended the decision to clear the park.

“I’m not going to critique other people’s performances,” McConnell said after a weekly party lunch.

Asked if clearing the park was a good idea, Sen. John Thune, a South Dakota Republican, said, “A lot of this is going to be in the eye of the beholder.”

Sen. Ron Johnson, the Wisconsin Republican who heads the Senate Homeland Security Committee, said he had not seen footage of the incident. That drew a veiled response by Schumer on the floor later, when he said, “For my friends on the other side who claim they have not seen the events of last night, I suggest you find a moment and turn on the television.”

Concrete legislative proposals on policing were on a much slower track. Hoyer told reporters House Democrats could come back to the U.S. Capitol before June 30 if a package was ready, but the timing was dependent on when lawmakers, led by the Congressional Black Caucus, came up with something and it had made it through committee.

Schumer said he was pushing to have something done by the end of June, but as minority leader in the Senate he has no say in the Senate schedule. McConnell said his priorities for June included confirming more judges, a wilderness bill and the annual defense policy bill.

“It’s certainly something we need to take a look at,” McConnell told reporters when asked about police accountability measures. “There may be a role for Congress to play in this as well, and we’ll be talking to our colleagues about what, if anything, is appropriate for us to do in the wake of what is going on.”

Sen. Lindsay Graham, the South Carolina Republican who heads the Senate Judiciary Committee, said he plans to hold a wide-ranging hearing June 16 to look the issue.

Graham told reporters he was puzzled by the church incident. “I don’t know what the purpose of the trip was. I mean, to show appreciation for the church? I don’t know. You’ll have to ask him what he was trying to accomplish,” he said.

Sen. Ben Sasse, a Nebraska Republican, had the harshest GOP words for Trump, saying there was no fundamental right to destroy property, but “there is a fundamental — a constitutional — right to protest, and I’m against clearing out a peaceful protest for a photo op that treats the Word of God as a political prop.”