Despite crop fears, coffee market may be topping

The dry spell in Brazil earlier in 2014 has dominated headlines in the coffee futures market and kept prices buoyed for much of this year. Concern over the critical "flowering" period for the 2015 Brazilian crop has sent coffee prices to new highs this month.

However, coffee traders may want to start considering if any potential crop reductions will soon be priced into the market. 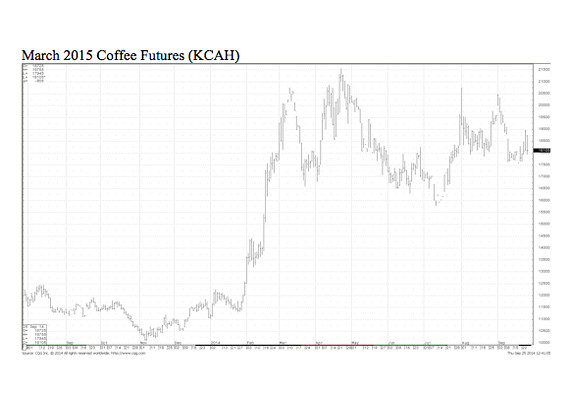 Brazil is the world's largest producer and exporter of coffee beans. Thus, changes in the state of the Brazilian coffee crop can have an outsized effect on prices.

Earlier estimates had the 2014-15 Brazilian coffee harvest pegged as high as 60 million bags — a massive harvest by any measure.

However, a prolonged dry spell that began late in 2013 and carried over into 2014 took its toll on Brazilian trees. Crop estimates were cut. Prices soared.

Since that time, coffee values have settled into somewhat of a range, where they have remained for much of the year.

It is then ironic that even as prices jumped to new highs last week, the outlook for 2014-15 production has taken a "less gloomy" turn. Earlier this month, Volcafe, one of the most highly respected independent crop analyst services, upped estimates for 2014/15 Brazilian production to 47 million bags — substantially above some other private estimates ranging as low as 41.7 million bags. Volcafe cited higher yields out of Minas Gerais, Brazil's highest producing coffee states, as a main reason for the upgrade.

It is our opinion that the coffee market, as commodities markets often do, may be pricing in a worst-case scenario off of damage estimates earlier this year. It could soon be approaching a position, at least in traders minds, to believe that the news can only get better.

Volcafe's estimate may speak to that. Brazilian coffee trees, having been widely replanted over the last half decade, are young and tolerant of adverse conditions. In addition, Colombian production is rebounding sharply, helping to offset some of the setbacks in Brazil.

There is no doubt that the 2014/15 Brazilian coffee crop will be nowhere near original estimates from nine months ago. However, with coffee prices currently over 80% higher than they were at that time, fresh crop estimates coming in better than anticipated, and a seasonal tendency for prices to decline after the October flowering season in Brazil, we think the coffee market is setting up for a selling opportunity.

Futures traders can look to sell the March contract on further October rallies or seek, as we do, to engineer option selling strategies to take advantage of a rally that could be approaching it's apex.