A previous version of this article mistakenly attributed a comment by a Procter & Gamble representative to Kellogg. We regret the error. 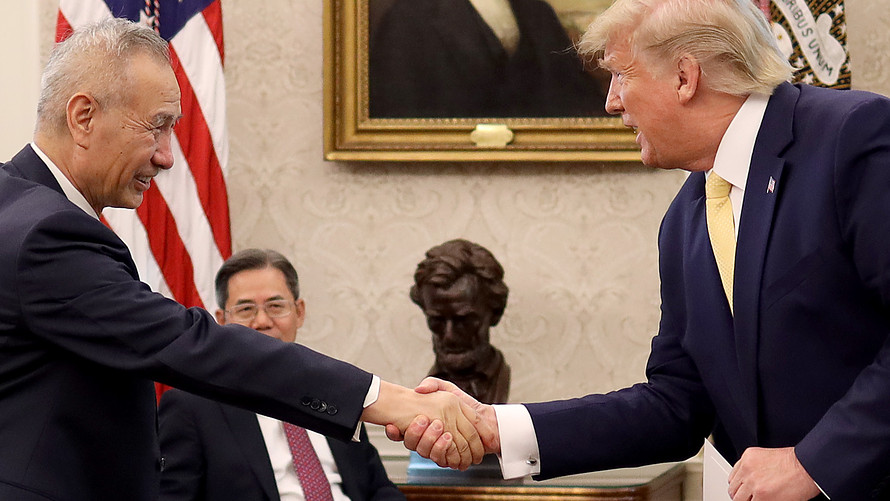 U.S. stocks have had an impressive run over the first six weeks of the year, shaking off concerns over the impact of the coronavirus outbreak, potential policy uncertainty relating to the 2020 presidential election, and manufacturing sectors in many advanced economies that remained mired in contraction.

One reason for the market’s resilience is the belief that last month’s U.S.-China trade deal, pitched as the first phase of, presumably, a larger accord, would lessen impact of trade uncertainty on corporate performance, but an analysis of corporate conference calls this earnings season shows that a significant share of companies are still concerned about tariffs and the chances of a global economic slowdown.

Through Friday, at which point about two-thirds of the S&P 500 had reported fourth-quarter earnings, there had been 184 mentions of “trade war,” “tariffs” and other concerns in earnings calls, a decline from peak of 705 in the third quarter of 2019, but a figure that will certainly rise as the final third of companies report this month, said Derek Valles, an equity researcher at Amenity Analytics, which compiled the data for MarketWatch. 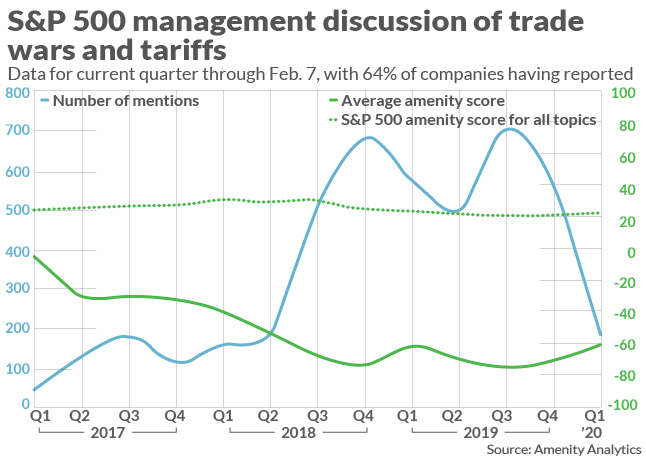 Companies are still discussing the topic at a faster pace than in all of 2017 and the first half of 2018, when the U.S.-China trade war was heating up, and those who are mentioning it are taking a decidedly negative tone. Amenity assigns an “amenity score” to management commentary on various topics on a scale of -100 to +100, using the budding science of natural-language processing, which deploys computer programs to assess human language.

So far, it has assigned a score of -60 for the current earnings season on tariff and trade topics, which is well below the -3.9 of the first quarter of 2017 and only slightly better than the nadir of -75 seen in the third quarter of last year.

“What you see towards the middle of middle 2018 was a huge ramp-up and focus in how folks are discussing trade wars, tariffs in so forth and a decline in the overall amenity score, which is indicative of that folks are talking more about and they’re speaking, on balance, negatively about it,” Valles said. “It remains a headwind for many firms.”

In other words, there are fewer companies concerned about tariffs than during the worst of the trade war, but remaining duties are negatively impacting the performance of many firms. Companies that have cited the negative impact of tariffs on their 2020 outlooks include Whirlpool Corp. /zigman2/quotes/200296850/composite WHR +1.24%  , O’Reilly Automotive Inc. /zigman2/quotes/207206119/composite ORLY -2.67% and Boeing Co. /zigman2/quotes/208579720/composite BA +1.01%  .

Jennifer McKeown, head of global economics service at Capital Economics, wrote in a note following the signing of the Phase 1 trade deal that “tariffs remain high and we suspect that tensions will persist in other forms,” such as the Trump administration’s encouraging allies to not deploy hardware manufactured by Chinese firms like Huawei Technologies Co. “Any adverse effects on trade so far will not be fully unwound, since tariffs are far higher than they were,” she added.

The Trump administration has said that Huawei presents a national-security threat and has issued regulations and executive orders that prevent U.S. companies from using its hardware in critical infrastructure. It has mounted an international pressure campaign to convince allies to do the same, but has been unsuccessful in many cases, with the United Kingdom’s recent decision to allow Huawei to supply some high-speed network equipment being a recent example.

Another potential headwind for stocks, which was potent during the middle of last year, were fears of an oncoming recession. Similarly, mentions of “recession,” “slowdown” and related terms appear to be trending lower, though companies that are discussing these topics are doing so as pessimistically as they have since the start of 2017. 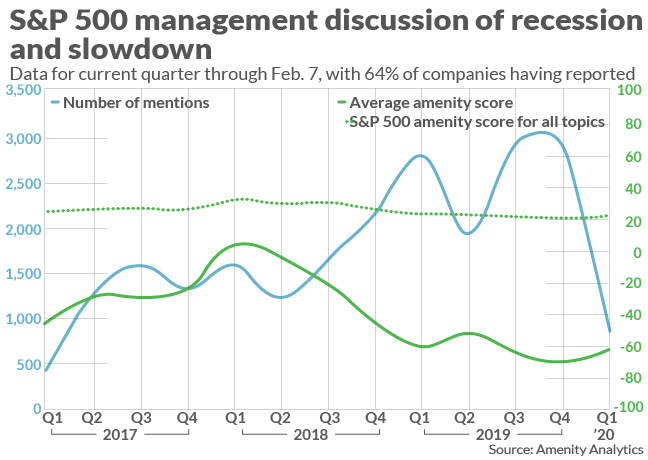 Companies most worried about an economic slowdown include Kellogg Co. /zigman2/quotes/209631250/composite K +3.69%  , Caterpillar Inc. /zigman2/quotes/203434128/composite CAT -1.77% and Procter & Gamble Co. /zigman2/quotes/202894679/composite PG +0.59%  , according to Amenity’s analysis. All three have seen year-to-date declines in their stock prices. A P&G representative said that executive remarks in a January call were “normal,” and that “we consistently offer context on all our earnings calls based on challenges or volatility in the macro, geopolitical and competitive landscape.” Kellogg declined to comment, while Caterpillar did not respond to a request.

The most heartening aspect of earnings calls so far has been the outlook for profit margins. With the S&P 500 priced at 19.1 times forward earnings, according to Refinitiv, above the 10-year average of about 15 times, investors appeared to be betting that large-cap earnings growth can recover from near-flat earnings growth in 2019. And management commentary so far appears to give reason for hope, as companies are, on average, talking more optimistically about profit-margin expectations than at any point since 2017. 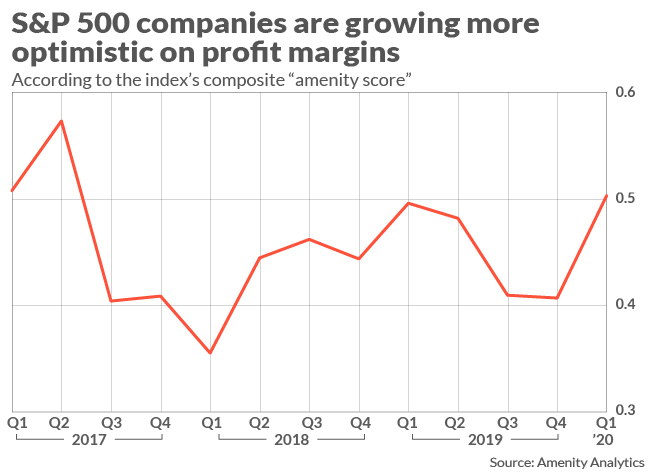 To be sure, many analysts question whether such optimism is warranted, as S&P 500 profit margins have been steadily rising for years, and the recent imposition of tariffs, along with a tight labor market that has helped instigate faster wage growth, could eat into earnings.